The greatest at their position

Dawkins defined the word leader, both vocally and with his attacking style of play. His contributions as the anchor on many of his defenses cannot be measured because they were physiological and gave his team a competitive edge when they needed it most.

Dawkins does have numbers to back up my case, too.

Lynch played the game like hard-hitting safeties Ronnie Lott, and Steve Atwater did before him. He put his body on the line every Sunday, and receivers were hesitant to go across the middle in the 1990s and 2000s whenever they played the Buccaneers.

He is the team’s all-time leader in tackles with 1,350 and had a nose for the football, hauling in 23 interceptions for Big D.

Woodson was a premier hitter, too. His big body allowed him to deliver the huge hits, and running backs remembered the pain he brought daily. No. 28 didn’t have the longest career, but he was among the best in his prime.

A crushing hitter in the open field, Tatum was nicknamed “The Assassin” by his teammates and is known for his hit on Patriots wide receiver Darryl Stingley that paralyzed him, along with a helmet-popping hit on a Vikings receiver in Super Bowl XI.

He finished his career with 37 interceptions and was a three-time Pro Bowler, but a small number of defensive backs were more aggressive tacklers than Tatum.

He would be top-5, maybe number one, with a complete career. However, during his short career, he was as good as anybody that ever played the position.

Scott was a key member of the 1972 Miami Dolphins undefeated season and was named Super Bowl MVP of Super Bowl VII, recording two interceptions in the Dolphins’ 14-7 win over the Washington Redskins including one in the fourth quarter. He helped the Dolphins in their 24-7 Super Bowl VIII win, recording two fumble recoveries, 20 punt return yards, and 47 kickoff return yards in that game. He established 2 Super Bowl Records. Jake set a record by being the first player to recover 2 fumbles in one game. He also first established the record for most career fumble recoveries in Super Bowls at two, a record now shared by 12 others. Scott is still the only player to have recovered one of his own team’s fumbles and his opponent’s fumbles.

Overall, Scott finished his nine seasons with 49 interceptions. Although, he made 35 interceptions playing 6 seasons for Miami, making him the Dolphins’ all-time leader in that category. Scott had 13 fumble recoveries in his career. He gained 1,357 yards and a touchdown returning punts and 137 yards on special teams on six kickoff returns.

Smith established himself as one of the most feared and hardest-hitting safeties in the NFL (a reputation later held by his protégé, Steve Atwater). Smith was voted to play in six Pro Bowls (following the 1985–1986, 1989–1991, and 1993 seasons), was named All-American Football Conference (AFC) in 1984 and 1988… He played on three Broncos Super Bowl teams (XXI, XXII, XXIV) and was named All-Pro four times.

Smith’s career totals include 1,171 tackles, 30 interceptions, and 15 sacks. He posted a career-high five interceptions in 1991. He ranks fourth all-time among Denver Broncos in games played with the franchise. With 184. Easley was the NFL Defensive Player of the Year in 1984 from his safety spot after returning two of his league-leading 10 interceptions for touchdowns.

A miserable kidney disease allowed Easley to only play from 1981-1987, but there weren’t many better during that stretch.

Eddie Meador was an undersized safety that was always in the right place at the right time. You have, I’m sure, heard of the Fearsome Foursome? Will as a testament to how good Eddie Meador was, he was the captain of that team.

It still holds 5 Rams teams records to this day, including most interceptions with 46. Eddie was also named to the NFL’s all-decade team for the 1960s. Meador not being in the hall of fame will show you how ridiculous the voters are at times. Eddie Meador DESERVES to be in the hall of fame!

He finished his career with the Lions, having picked off 50 passes during the wonder years for Detroit in the 1950s and 1960s. The Lions’ last line of defense averages nearly 16-yards per interception return, a highly respectable number.

Tunnell not only finished his 14-year career (with the Giants then Packers) with a then-record 79 interceptions, he was the first African-American ever inducted into the Pro Football Hall of Fame in 1967.

In the first Super Bowl, wood’s most memorable play came when he took back an interception 50-yards for a score, opening the floodgates to a 35-10 win.

He retired in 1971 as an eight-time Pro Bowler with 48 career interceptions.

Cherry was another “do-it-all” defensive back like many of the players on this list and was handsomely rewarded for his stellar play by being named to six Pro Bowl teams.

The heart-and-soul of the Steelers chases down running backs and quarterbacks alike, trademark locks flying in the wind, with more passion and speed than I’ve ever seen.

He is equally as valuable against the pass, where he usually is in the right spot at the right time and has displayed some of his most acrobatic interceptions in the most crucial moments for Pittsburgh.

He’s a fine run-stuffer ready to take on any size back and always makes a big return following one of his interceptions.

Reed was deservedly named the Defensive Player of the Year in 2004. He’s a seven-time First-Team All-Pro and has 56 career picks and counting.

He revolutionized the “safety blitz” that we see in every game today and finished his career with a whopping 52 interceptions. Not many safeties were more complete than Larry Wilson. 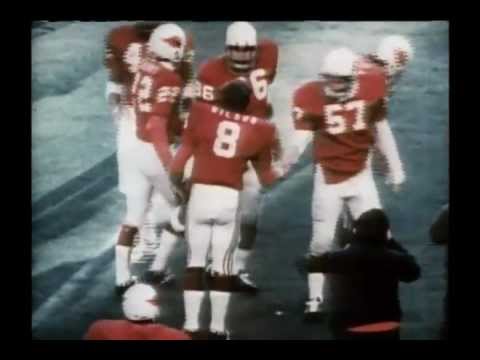 As a member of the Oilers and Redskins, Ken Houston totaled 49 interceptions and scored 12 touchdowns.

In 1971, he set an NFL record with five touchdown returns (four interceptions and one fumble). The record would stand until Devin Hester broke the record in 2006.

Houston really did it all. Outside of being a play-making safety, he returned kicks and punts and recovered 21 fumbles in his illustrious time as a professional.

Krause intercepted 81 passes in his career with the Redskins and Vikings, 12 of which came in a breakout rookie campaign of 1964.

This man could flat-out intercept the football.

In his first season in the NFL, Krause had a pick in seven straight games and almost matched that total in 1968 when he intercepted a pass in six straight games.

Lott was totally fearless but didn’t play out of control. He was always a step ahead of the offense and knew when to wrap up and when he could really lay out an opposing receiver.

Along with his intimidating style of play, Lott was an elite ball-hawk, reeling in 63 interceptions with the 49ers, Raiders, Jets, and Chiefs, returning five of them for touchdowns.