The commissioner of Major League Baseball, Rob Manfred, issued a statement on Tuesday in which he “reject[s] the premise” that players in the minor leagues are not paid a minimum wage sufficient to support themselves. This prompted an onslaught of criticism just one day after the Senate Judiciary Committee sent a letter raising questions about how the league treats its minor league players. Check out the top sports betting sites for betting on baseball! 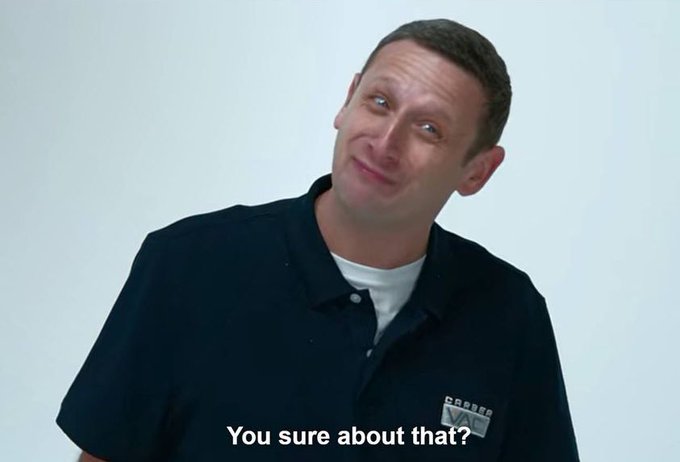 Before the All-Star Game in Los Angeles on Tuesday, Manfred spoke with reporters and was pressed to explain why many minor-league players are paid less than the federal minimum wage. The notion was “rejected” by Manfred.

Hannah Keyser
2022-11-29 20:38
Asked Rob Manfred if his owners don’t pay minor leaguers a living wage because they can’t afford to or because they aren’t interested in doing so. “I reject the premise that they’re not paying a living wage,” Manfred said.
6817 507

“I kind of reject the premise of the question that minor league players are not paid a living wage. We’ve made real strides in the last few years in terms of what minor league players are paid, even putting to one side the signing bonuses that many of them have already received. They receive housing, which obviously is another form of compensation.”

“I just reject the premise of the question. I don’t know what else to say about that,” Manfred added.

Senate Judiciary Committee leaders this week requested Manfred to explain the possible consequences of removing the sport’s antitrust protection from minor league players, according to the AP. Several queries from the committee were forwarded to Manfred in a letter, which may lead to legislation restricting the antitrust exemption’s scope of use.

“We look forward to providing detailed information to the committee regarding baseball’s limited antitrust exemption and how it has provided franchise location stability at the major league level, maximized the availability of minor-league baseball for fans and quality employment opportunities for aspiring major leaguers,” MLB said.

Manfred’s denial that minor leaguers are not paid a living wage enrages minor players even more. After Manfred’s speech on Tuesday, the non-profit group Advocates for Minor Leaguers called him out and made the following statement:

“Most Minor League baseball players work second jobs because their annual salaries are insufficient to make ends meet. The commissioner makes an annual salary of $17.5 million. His suggestion that Minor League pay is acceptable is both callous and false.”

MLB increased the non-40-man roster minimum wage in the minor leagues last year, but many players are still not paid a living wage. Only in the course of the regular season do players receive a salary. However, they are not compensated enough for their work during the preseason, postseason, or offseason. 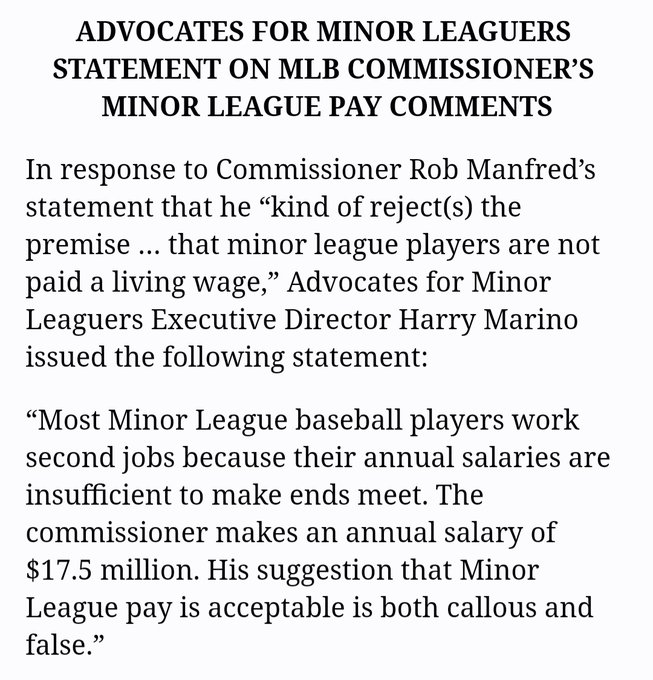 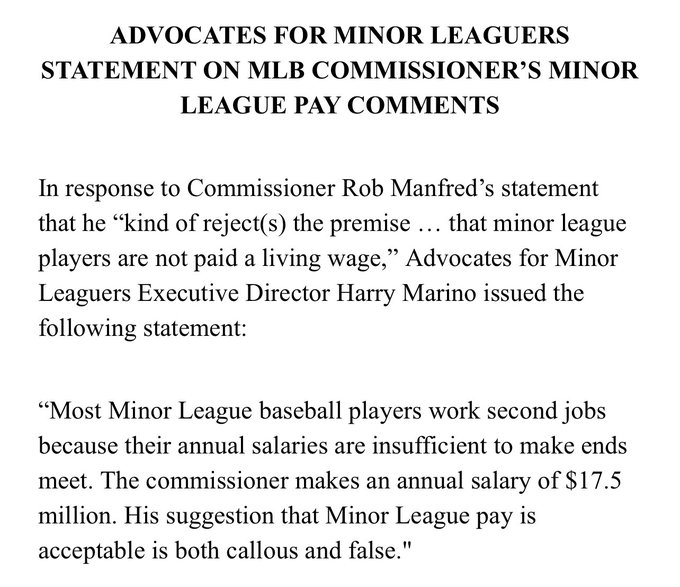 This past week, MLB reached a $185 million settlement with a class-action lawsuit brought by players in the minor leagues. The players claimed that their teams had violated minimum wage and overtime regulations.

MLB will enable teams to pay minor league players during spring training, extended spring training, and instructional leagues as part of the deal that would distribute $120 million to more than 20,000 players across the group.

MiLB Players
2022-11-29 20:38
Today we focus our Minor League Progress Report on the NL Central. The @Reds and @Brewers are two of the only MLB teams refusing to pay their players in extended spring training. https://t.co/9G5J1JDe9a 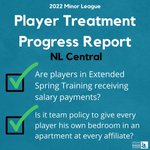 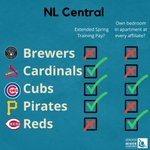 The New York Mets recently had a meeting with the nonprofit organization ...

Less than eight months after capturing another NBA championship, the Los Angeles ...