Ty’s Take on the Bengals vs Raiders Playoff Game 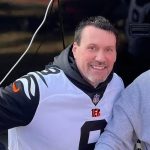 The Cincinnati Bengals have not been to a playoff game since 2015 and have not won a playoff game since 1990. The Bengals head coach Zac Taylor had this in mind when he decided to rest all of his key players in last week’s loss to the Cleveland Browns. As a result, the Bengals are entering this home playoff game against the Las Vegas Raiders healthy and ready to go. The last time these two teams met up was in November during the regular season, and the Bengals defeated the Raiders 32-13.

To find the best site to bet on this weekend’s NFL playoff games click here!

Quarterback Joe Burrow did not play last week against the Browns and said he was glad to have taken a mental and physical break from the game. Burrow needs to come out strong, and part of that will depend on how his offensive line holds up. The Raiders have two good pass rushers in Maxx Crosby and Yannick Ngakoue. The Bengals will need to plan for them, so Joe Burrow has time to operate in the pocket. Joe Mixon will play a significant role in this game, especially if the weather is terrible. Mixon had 123 yards and two touchdowns the last time these two teams played. The Bengals offensive line will need to create holes to establish an early running game. The Raiders have two solid linebackers in Denzel Perryman and K.J. Wright, but their subpar secondary can be taken advantage of. Look for Tee Higgins, Tyler Boyd, and Ja’Marr Chase to keep the Raiders in a variety of defenses to stop the explosive plays of the Bengals, which should once again open up the Bengals running game.

The Bengal’s defense has been playing exceptionally well this season and will need another big day. In their first game, D.J. Reader and the rest of the Bengals line held Raiders running back Josh Jacobs to just 37 yards in nine carries. The Bengals linebackers Logan Wilson and Germain Pratt will need to secure the middle of the field. Their third linebacker Marcus Bailey could prove to be a valuable rotational piece.

The Raiders Quarterback Derek Carr will once again rely on his tight end Darren Waller to move the chains, so containing him will be a priority. Waller had 116 yards in seven carries last time they met up. The Raider’s other tight end, Foster Moreau, has been on fire lately, so the Bengals will need to keep him in check along with receivers Hunter Renfrow and Bryan Edwards. Look for the Bengals secondary to shut these guys down. Chidobe Awuzie, Eli Apple, and Trae Waynes are all healthy and will finally play in the same game. Cornerback Awuzie has been playing lights-out football, and I see him having another big game. Jessie Bates and Vonn Bell at safety should shut down any big plays the Raiders are planning.

Lastly, the Bengals must get Derek Carr out of his comfort zone by bringing lots of pressure. Getting to Carr early should throw his rhythm and timing off enough to be effective. In the last game the Bengals, defensive ends Trey Hendrickson and Sam Hubbard both recorded a sack of Derek Carr.

It certainly feels like the Bengals have the advantage with the Raiders coming to town after playing a long game in overtime last week. This is a short week, possible bad weather, and a well-rested Bengals team should finally break that losing streak in the first round of the playoffs. This Bengals team is different from the past teams and will prove that on Saturday. WHO DEY!

Stories You Should Know: 1964 Cleveland Browns

1964 Cleveland Browns: Paul Brown was the original coach of the ...