Tirico’s call of Sam Hubbard’s miraculous Touchdown return was spot on. From watching all of the weekend’s broadcasts, Tirico seems to be the most prepared and brings the absolute right emotion to the game.

Collinsworth is also prepared and communicates what he knows about the game better than any analyst. The best way to know that Collinsworth is the best is that every team thinks he is against them! Heck, he was a Bengals, and every Bengals fans actually think Collinsworth hates the Bengals. Fans are emotional and think every announcer is against their team because no one wants to hear the bad parts about their team. But, last night, he complimented the Bengals at about the same rate that he spoke generously about the Ravens. 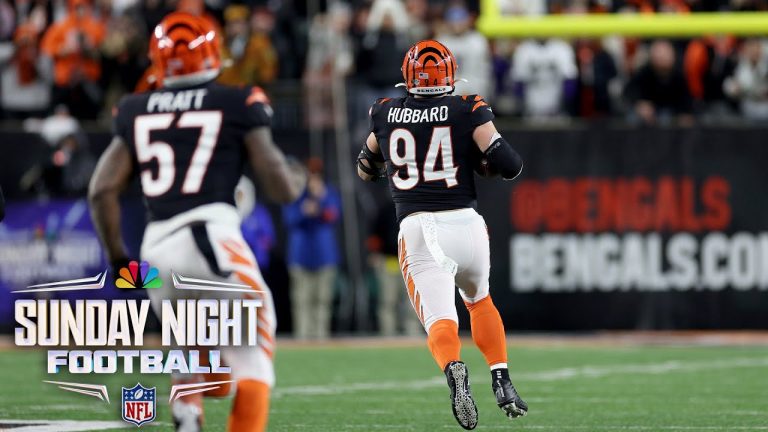 2) Josh Allen is not up there with Mahomes or Burrow

Most people mention these three when talking about who is the best quarterback in the NFL. Sunday showed that only two belong in that conversation, and Josh Allen is the one that gets left out. Allen’s issue is the fact that Allen takes too many chances and plays loose with the ball. He kept the Dolphins in that game; I know in the past, Mahomes had that issue also, but that has not been true this season as Mahomes has progressed as a quarterback. I would still rank Allen at number 3, but if he wants to challenge Burrow and Mahomes, he must take fewer chances.

3) Mike McDaniel and Brandon Staley should both be fired

I think both of these teams underachieved for the talent they had this season. McDaniel was playing short-handed on Sunday and his team fought hard, but his play calling was a little iffy, and his inability to get a play in quickly to Quarterback Skylar Thompson doomed the Dolphins.

Staley did what Staley always does. He made a lot of head-scratching play calls and generally had a healthy, talented team and a 27-0 lead. He promptly chokes away the game with some interesting play-calling and horrible game management.

For a half, it looked like the Seahawks might upset the 49ers, then the 49ers went on the attack on offense and defense and overran the Seattle Seahawks. Quarterback Brock Purdy once again did the job, and with the weapons he has on offense all Purdy has to do is play within himself, and he does that very well.

The Defense struggled to contain the Seahawks for one half. In the second half, the 49ers defense administered a beating. The 49ers were the most impressive team on wild card weekend and should be the favorite to advance to the Super Bowl out of the NFC.

Coaches often kill quarterbacks’ careers; in this instance, Daboll saved Daniel Jones. Jone started the year as a game manager, so he was asked not to lose the game. As the season went on, he was asked to do a little more each week. The end of that work was shown on Sunday as Jones played the best game of his career at the perfect time. Jones was a leader and made big plays in big situations; the Giants are a live underdog headed to Philadelphia.

6) John Harbaugh is a good coach, but his time management was highly questionable

I understand that Harbaugh wanted to score with as little time left as he could. That would have been ok if not for a bad holding penalty that made the Ravens desperate to hit a big play. Harbaugh still had the Ravens in a huddle with a minute left, and after the holding call, they had to take deep shots that were a long shot at working. The Ravens still had two timeouts left in the last twenty seconds. It was an obvious mistake and had a huge hand in deciding the game’s outcome.

7) The Bengals Super Bowl hopes depend on the offensive line

Two Bengals offensive linemen were already out for the team, so Max Scharping (left guard) and Hakeem Adeiji (right tackle) are filling in for Alex Cappa and La’el Collins.

Cappa is still recovering from an ankle injury. Collins, however, has been out of action since suffering a torn MCL and ACL in Cincinnati’s Week 16 match against the New England Patriots.

Jonah Williams left tackle, seemed to have suffered a knee injury in the Bengals’ 24-17 win over their division rival.

Jackson Carman replaced him and was decent on his first drive, but from then on, he was terrible at giving up a sack and a costly holding penalty. Carman has been nothing but a wasted draft pick since getting to Cincinnati. He is a player that is constantly out of shape and, for lack of a better word, is lazy. The Bengals could try Isiah Prince at tackle; he was terrible last year but better than Carman. At this time of year, options are thin, finding starting left NFL tackles, which could be the Bengals’ downfall. But as we have seen before, the Bengals are a resilient team and great at making huge plays in big situations, so I wouldn’t count them out just yet.