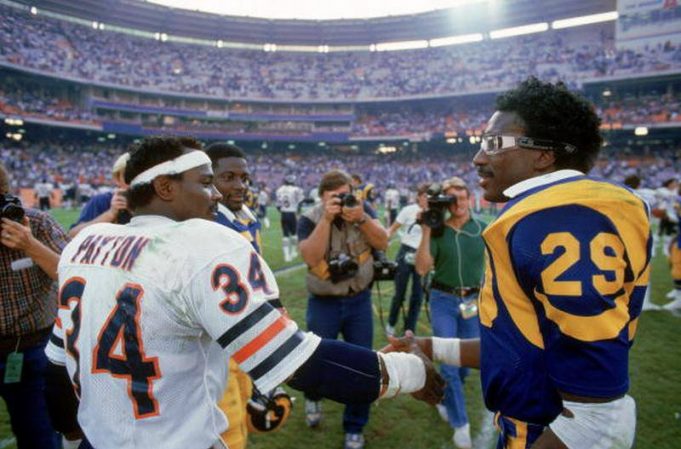 Dunn spent six seasons with the Bucs and six seasons with division rival the Atlanta Falcons. Dunn retired with 10,967 yards on the ground, which ranks as 19th best on the NFL’s all-time rushing list.

Alexander accounted for 9,453 yards over his nine-year career—impressive for such a short-lived career.

Shaun Alexander who recently retired in 2008 played most of his years as a Seattle Seahawk. While in Seattle, Alexander was named the NFL’s Most Valuable Player in 2005 when he rushed for 1,880 yards while scoring 27 touchdowns and leading his team to the Super Bowl.

John Riggins had a lengthy career, playing nine seasons with the Washington Redskins and five with the New York Jets. Riggins is on the NFL’s all-time rushing list with 11,352 yards. During his 14 years in the league, Riggins scored an impressive 104 touchdowns on the ground.

Tiki Barber was a member of the New York Giants for 10 years where he ran for a total of 10,449 yards, which is 22nd best all time. Barber was only a three-time Pro Bowl but was one of the best running backs in the 2000s.

Marcus Allen recorded 12,243 yards on the ground through his very length career in football. Allen spent 11 seasons with the Oakland Raiders and five with the Kansas City Chiefs. Allen’s best season came in 1985 when he racked up 1,759 yards on the ground and scored 11 touchdowns.

When you think of old-school football, running back Jim Taylor should appear in your mind. Taylor had a remarkable 10-year career and ended his career with 8,597 yards.

Roger Craig, former running back of the San Francisco 49ers, Los Angeles Raiders and Minnesota Vikings won three Super Bowls with the 49ers. Over his 11-year career, Craig accumulated 8,189 yards and caught an incredible total of 566 passes. Every team he played on in his career made the playoffs.

With no injury and a complete career, he may have been number one. Davis is one of the few running backs to run for 2,000 yards in a season as he tallied up 2,008 yards in 1998.

Martin spent time with the New England Patriots and New York Jets during his 11-year career. Martin’s best season came in 2004 when he ran for 1,697 yards while averaging a stellar 4.6 yards per carry.

Tomlinson is often referred to by his initials, L.T. was an effective passer on halfback option plays, Tomlinson threw seven touchdown passes and ranks second behind Walter Payton (8) for non-quarterbacks since the AFL–NFL merger in 1970. He was named to the NFL’s 2000s All-Decade Team as one of the top running backs of the 2000s.

Harris was one of the most violent runners to ever play the game as he ran for 12,120 yards and scored an impressive 91 touchdowns. While playing 12 seasons as a Pittsburgh Steeler, Harris won the Super Bowl four times.

Thomas rushed for 12,074 yards. During his career, Thomas played 12 seasons as a Buffalo Bill and one as a Miami Dolphin. Thomas’s best season came in 1992 as he ran for 1,487 yards and scored nine touchdowns.

Dorsett was a very underrated running back. Dorsett was the difference in putting the 1977 Cowboys over the top and helping to lead them to a Super Bowl title. Dorsett ran for a total of 12,739 yards in his 12-year career. Dorsett was a very explosive back as he averaged 4.8 yards per carry in 1977 as he ran for 12 touchdowns that season.

Sayers career was shortened by injury, but he was maybe the greatest open-field runner in football history. Sayers ran for 4,956 yards during his very short-lived seven-year career. Gale Sayers, who retired at the age of 28, averaged a whopping 5.0 yards-per-carry—just imagine if he kept on playing.

Smith is the NFL’s all-time leading rusher with 18,355 yards, however, he did that in 15 years in the NFL–nevertheless, that is still one of the NFL’s greatest accomplishments. I know people will say I am crazy for putting him this low. I just feel that the 8 guys ahead of him were better running backs.

Simpson was a six-time Pro Bowler as a Buffalo Bill and ran for a career 11,236 yards on the ground. His best season came in when he ran for 2,003 yards—one of a few backs to eclipse the 2,000-yard mark.

While playing only in nine seasons in the league, Earl Campbell ran for 1,000 yards five times in his career. Campbell retired with a total of 9,407 yards, but he scored an amazing 74 touchdowns and averaged 4.3 yards per carry.

He just retired after one of the most decorated careers in NFL history, of course, he is still trying to continue to play but prospects don’t look promising.

He was drafted by the Minnesota Vikings seventh overall in the 2007 NFL Draft. As a rookie, he set an NFL record for the most rushing yards in a single game (296) and was named NFL Offensive Rookie of the Year. He was then awarded the MVP award for his performance in the Pro Bowl and became only the fifth player in NFL history to have more than 3,000 yards through his first two seasons. In 2010, he became the fifth-fastest player to run for 5,000 yards, doing so in his 51st game.

One of the greatest all-around running backs in history. Faulk ran for 12,279 yards over his career and caught 767 balls for an incredible total of 6,875 yards. Faulk spent seven years as a St. Louis Ram and five seasons as an Indianapolis Colt. His best season came in 2001 when he ran for 1,382 yards, however, the Rams lost the Super Bowl to the New England Patriots that season.

Eric Dickerson dominated the decade of the 80’s, he was a six-time Pro Bowl and Hall of Fame inductee in the class of 1999 ran for a career 13,259 yards.

Sanders ran for 1,500-plus yards five times in his 10-year career—and he always made the 1,000-yard mark in all 10 of those seasons. Sanders ran behind, what most believe to be, a very poor offensive line. Some plays, Sanders would lose five yards, but then he’d get back up and gain 20 yards just like that. As he retired in 1998, he scored an improbable 99 touchdowns and averaged an even more impressive 5.0 yards per carry.

One of the greatest all-around football players of all-time, Payton ran for over 16,000 yards in his career. During his very long 13-year career, Payton won one Super Bowl with the Chicago Bears in 1985 when he ran for 1,551 yards and scored nine touchdowns while averaging 4.8 yards per carry.

During his nine-year career, Brown set multiple records in such an early stage of the sport. Brown ran for a career best 1,863 yards in 1963 when he scored 12 touchdowns on the ground and averaged a tremendous 6.4 yards per carry—that is unheard of.

The Bengals are lifeless in a loss to the Bears, the Fault is Zac Taylor’s