As always, no active players are on our Top 10 lists.

Dawkins was one of the great coverage safeties who could also knock your head off. He made the Pro Bowl 9 times, the All-Pro team 6 times and was a member of the 2000’s All-Decade team. The highlights below tell his story.

Though the Eagles fell short of their Super Bowl goal, McNabb consistently had the Eagles in play to win it all. He led his team to the NFC Championship Game five times, winning it once. He was a 6-time Pro Bowler and NFC Offensive Player of the Year during his career. One of the best Eagles quarterbacks in its history.

The tallest receiver in NFL history deserves to be on this list with his four Pro Bowls and is a member of the 1970’s All-Decade Team. Read my article on him here.

In eight seasons, he broke all of the Eagles’ rushing marks and was the leading rusher in Eagles’ history until very recently when LeSean McCoy broke it. He was a very versatile back who was a dependable receiver and even a return man. In 1978 and 1979, he made the Pro Bowl and was a first-team All-Pro. 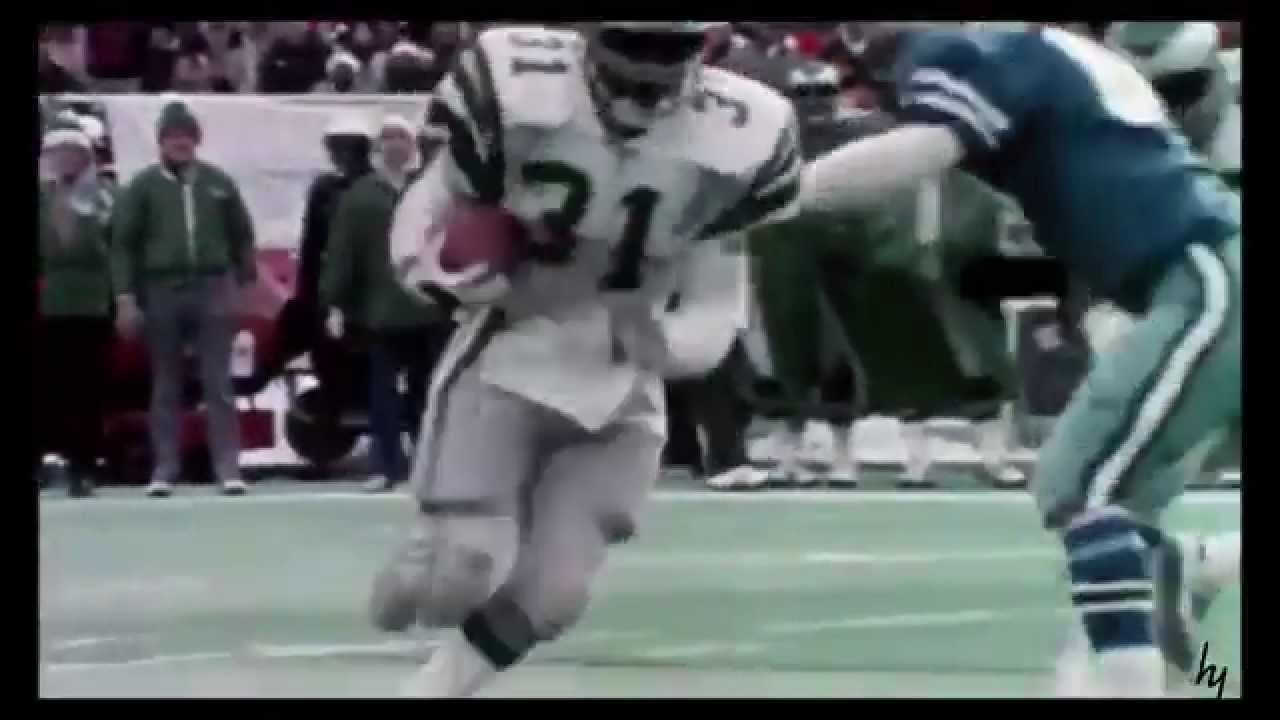 All About Wilbert Montgomery

McDonald was a very underrated receiver, but he was crucial during the Eagles 1960 season and ultimately in the 1960 NFL Championship game. McDonald was a 6-time Pro Bowler and two-time All-Pro. He was inducted into the Hall of Fame in 1998.

“The Boomer” was a Pro Bowler and All-Pro nearly his entire time with the Eagles from 1964-1968 and was named to the 1960’s All-Decade Team. He was one of the finest offensive tackles in NFL history and was inducted into the Hall of Fame in 2004.

Pihos is one of the forgotten greats, who led the NFL in receptions 3 times, made the Pro Bowl 6 times, was an All-Pro five times, was part of the two Eagles championship teams in 1948 and 1949, was on the 1940’s All-Decade Team, named to the NFL’s 75th Anniversary team, and was inducted into the Hall of Fame in 1970.

There is an argument to be made that Reggie could be number one on this list, but the reason for number three is explained later.

Van Buren will always be remembered as a four-time NFL rushing champion and the heart of the offense that brought back to back NFL Championships to Philadelphia in 1948 and 1949. He rushed for over 1,000 yards twice in 12 game seasons and was also a very good defensive player in the secondary. He was inducted into the Hall of Fame in 1965.

“Concrete Charlie” was the last of the 60-minute men and what’s truly amazing about Bednarik was that he was an All-Pro at both linebacker and center, a feat we’ll never see again. He was one of the toughest players in the history of the NFL and was instrumental in bringing a World Championship to Philadelphia, like Steve Van Buren did in the late 1940’s, which has to elevate them above the rest of the players listed here.

Click here to find the best site to bet on the NFL ...

Top 10 Philadelphia Flyers of All Time

10) Tim Kerr Kerr had a spectacular eight-year run where he had ...

Get your Free Bet now!
Latest News
When Will It Be Legal to Register with Online Sportsbooks and Betting Sites i...
From January 8th, 2022, at 9am, New Yorkers ...
Can I register an additional / new sportsbook account in New York while being...
The world of online gambling in the US ...
Is‌ ‌DraftKings‌ ‌sportsbook‌ ‌legal‌ ‌in‌ ‌New‌ ‌York‌ ‌city?‌
Great news for New York sports bettors, DraftKings ...
How can I open a sportsbook account as a resident in New York?
You have no doubt heard the exciting news ...
Is‌ ‌eSports‌ ‌betting‌ ‌legal‌ ‌in‌ ‌New‌ ‌York?‌
eSports has risen in popularity in recent years, ...
Betting Tips
Betting Tip: Sacramento Kings vs Los Angeles Lakers
Tip:
Home/Away: Home
Odd:
2.32
Current Bonus:
100% up to $500