Otto was born in Waukegan, Illinois December 6th, 1921 and would go on to be the greatest winner in Professional Football history. Otto received a Basketball scholarship from Northwestern University in 1941. Graham was discovered playing intramural football his freshman year at Northwestern and was asked to play College Football. He played Tailback and quarterback at Northwestern culminating in a senior year where he was named the Big 10 MVP and was third in the voting for the Heisman trophy.

After College Graham served in the military at the end of World War 2, after the War Otto was approached by Legendary coach Paul Brown about playing for the Cleveland Browns in the AAFC a new professional football league, Graham agreed to play for the Brown’s but they weren’t starting play until the next season. In the meantime Otto decided to play for the Rochester Royals of the National Basketball League (NBL) a precursor to today’s NBA. It should come as no surprise that the Royals won the NBL championship in Graham’s lone year on the team in 1946.

1947 began a journey that no other quarterback has matched since, Graham in 10 years as the Brown’s quarterback won 10 straight division championships and led the Brown’s to the championship game all 10 years. In 1946 Graham had a QBR of 112.1 which stood as a record until Joe Montana broke it in 1989, Graham had a QBR over 90 in 5 of his 10 years and still holds the record for career average yards gained per pass attempt. He was named all-league in 9 out of 10 years he played.

Now it’s time to talk about the thing that separates him from every other quarterback who ever lived, he still holds the record for the greatest winning percentage by a quarterback in the history of Professional football at 81.4%! That’s 114 wins 20 losses and 4 ties, which to me will never be close to being matched. He threw 4 Touchdown passes in the 1950 NFLChampionship game and then topped that performance in the 1954 NFL Title game where he threw for 3 Touchdowns and ran for 3 more! His last game was the 1955 NFL Title game where he threw for two touchdowns and ran for two more, overall he had a postseason record of 9 wins and 3 losses.

Now I know a lot of people will say the game was different in the 1950’s and, it was. Defensive Backs could make contact all the way down the field, Quarterbacks were fair game and, not protected the way they are today. The High percentage passing of today was replaced back then by constantly stretching the field with your passing game, let’s face it it’s a lot harder to throw the ball deep than it is to constantly throw the ball short the way the game is played today. What it all comes down to for me on judging Graham’s greatness is just the simple fact that he won and he won a lot. Think about it ten years ten Championship games; to me this has to put him in the top ten greatest quarterbacks of all time. 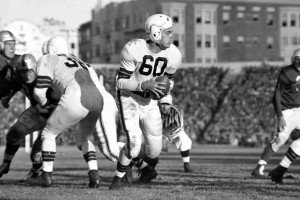