The Grueling Truth - Where Legends Speak / Pro Football / Six Men Who Should NOT be in the Pro Football Hall of Fame!

Six Men Who Should NOT be in the Pro Football Hall of Fame!

I want to start off by saying that the six players on this list of football players , coaches or owners in the Pro Football Hall of Fame is not meant to be demeaning to the players or coaches named. I just feel that the Hall of Fame should be reserved for the greatest, not the “very good”. Please note that I didn’t include any players or coaches who completed their careers before 1950 and were inducted. My reason is that the game during that time period was very different than the game today. To argue for or against players from that era makes little sense to me.

Lynn Swann, I believe, made the Hall Of Fame off of one great performance in Super Bowl X against the Dallas Cowboys. I get that he made some amazing catches to help the Steelers win, and he was the MVP but I challenge you to look at his career numbers and make a case that he is a Hall of Famer. He had only 336 career receptions for 5,462 yards and 51 TDs. His total receptions are not even in the top 250 for receivers all-time and his 5,462 career receiving yards barely break the top 200. As a comparison, Drew Pearson’s career included 489 receptions for almost 8,000 yards and he is very rarely even mentioned as even being a candidate for induction. Plus, if you look at Pearson’s career, he was just as clutch as Swann.

This is someone I have a huge problem with being in the Hall of Fame.  Levy’s first attempt as a Head Coach with the Chiefs was a complete failure to the tune of 31-42 in 5 years. With the Bills, he led his team to four straight Super Bowls and lostthem all. People forget that during the Bills playoff runs, the AFC was a very weak conference and the Bills didn’t have much competition. Not their fault but true nonetheless.  In the 5 AFC Championship games Levy led the Bills to, the best team they played was the 1988 Bengals who they lost to. To me, a great coach is a man that does one of two things:  wins championships (Levy didn’t), or be innovative (Levy certainly wasn’t). Levy’s big innovation was the “No-Huddle” Offense which was great except Sam Wyche did it first. When Levy’s career is compared to someone like Tom Flores, he falls way short. Flores won two Super Bowls and was the first minority Head Coach and General Manager in NFL history, I don’t believe the Hall of Fame should be for coaches who couldn’t win the big one or offered nothing innovative to the game.

Gatski was the starting center on one of the most dominating teams in NFL history:  The 1950’s Cleveland Browns. Once again how is he in over Jerry Kramer? He was a Hall of Fame Finalist just once in twenty years before being elected. Gatski was an All-Pro 3 times but I believe there are a lot more deserving offensive linemen who are not in.

It never occurred to me that Stenerud didn’t belong in the Hall of Fame until I looked up his career numbers.  I was surprised how bad they really were. In 13 years with the Chiefs, he connected on just 64% of his field goal attempts and 96.3% of his extra point attempts. In comparison, Stenerud was released by the Chiefs and replaced by Nick Lowery who, over the next 14 years as the Chiefs’ Kicker, hit on over 80% of his field goal attempts and 99.2% of his extra points. A lot of people say that Stenerud was a big reason the Chiefs one a Super Bowl.  I say that if it weren’t for him, they may have won more. People forget that in the longest game ever played (1971 Divisional Divisional Playoff vs. the Miami Dolphins), Stenerud  missed a 29 yard field goal that would have won the game at the end of regulation and then had a 42 yard attempt blocked in overtime. His 1,699 career points ranks 10th all-time and his 66.8% field goals made ranks 99th.

Tell me, are these the stats of even a good NFL Quarterback:  173 TDs, 220 INTs, 27,000 yards, 50.1% career completion percentage and a career QB rating of 65. Yes, Namath led the New York Jets to the biggest upset in NFL history when they defeated the Baltimore Colts in Super Bowl III but did you know in that Super Bowl season of 1968 that he threw 15 TD passes and 17 INTs? Namath led the Jets to the playoffs just twice and in those three playoff games threw 3 TDs passes with 4 INT’s with a 42.7% completion percentage! His career record as an NFL QB was 68-71-4.  Namath’s defining moment was Super Bowl III where he played well completing 17 of 28 passes for 206 yards. However, if you look at the game more closely, a case could be made that the MVP should have been RB Matt Snell who rushed for 121 yards and scored the only Jets TD.  You can even argue DB Randy Beverley for MVP as he had two INTs. Overall, Namath’s numbers are not close to being Hall of Fame caliber.  Yes, he won a Super Bowl a Super Bowl but so did Trent Dilfer! 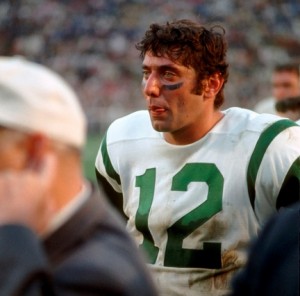 Wow, what a difference one year makes as this Bengals team went ...

Who Was Better: Babe Ruth or Barry Bonds

Both of these players’ records and careers can be questioned; Ruth played ...

Ranking the top 10 coaches in NFL history is not the easiest ...