Tombstone was a bad SOB!

Jackson’s career was cut short by a severe knee injury midway through the 1971 season. He finished with an unofficial total of 43 sacks, 31 of which came during the three season period of 1968-1970. Despite the shortened career, Sports Illustrated’s football expert, Paul Zimmerman, said that Tombstone Jackson was perhaps the finest overall defensive end and pass rusher he ever saw, a surefire Hall of Famer if he would have had a longer playing career, in a bigger media market. As it was Jackson will be remembered as a great one, only by a handful of football insiders, including those who lined up with and against him. And the way he is remembered by the guys that lined up against him, and what they thought of him as a player will tell you all need to know about “Tombstone” and his abilities on the football field. Very similar to another great Bronco, Terrell Davis, Davis for a few short years was as great as almost any running back that ever lived, but still can’t get recognition in Canton. If the NFL is for the greatest players that ever lived Rich”Tombstone” Jackson deserves to be in it. 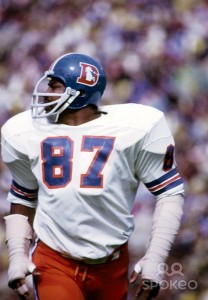 Jackson wore number 87 with the Broncos and was part of the inaugural class of inductees into the Denver Broncos’ “Ring of Fame”. He was inducted in 1984 along with safety Goose Gonsoulin, running back Floyd Little, and wide receiver Lionel Taylor. He was voted to the Colorado Sports Hall of Fame in 1975.