Randy is a Hall of Famer!

Dan Reeves, who played with the Dallas Cowboys during the Doomsday Defense era and later spent 23 years as an NFL head coach with three franchises, called Gradishar, “as good a linebacker as I’ve ever been around — and I’ve been around some great ones.”

When Pro Football Weekly selected an all-time 3-4 defense, Gradishar was one of the four linebackers along with Hall-of-Famers Lawrence Taylor, Andre Tippett and Harry Carson.

Gradishar played only 10 seasons but went to seven Pro Bowls and was the NFL’s Defensive Player of the Year in 1978.

I put these quotes at the start of this story, to show that I am not the only person that feels that it is an absolute joke that Randy Gradishar is not in the hall-of-fame. Maybe if he would have played in Chicago or New York he would be in, maybe he should have looked for the limelight instead of putting his team first. It is my contention that there has never been a better inside linebacker than Randy Gradishar! Not Jack Lambert, no not even Mike Singletary, the NFL hall-of-fame selection committee is an absolute joke. The way stats were kept for defensive players years ago in a lot of cases were not official, but still Gradishar was a every down linebacker who was as adept at stopping the run as he was defending the pass.

The native of Warren, Ohio, who played 10 seasons with the Denver Broncos after graduating from OSU in 1974, was the best player on the Broncos’ “Orange Crush” defense that ranked only a step behind Pittsburgh’s “Steel Curtain.” Gradishar and Pittsburgh’s Jack Lambert were the most dominating middle linebackers of their era, but while Lambert was known as a punishing hitter, Gradishar worked more quietly. The lack of flash likely has contributed to his HOF brushoff. It is a shame that in society today a player who quietly does his job, can be overshadowed by a lesser player that glorifies himself. Gradishar was a clean player not a head hunter, he was a dominant player every year he played.

In 1976 the Broncos switched to a 3-4 defense in which Gradishar moved from middle linebacker to inside linebacker, where he stayed the remainder of his career. The switch to the 3-4 defense gave Gradishar responsibilities relative to rush-lane discipline and pass coverage that are beyond those of a middle linebacker in the 4-3 defense.Lambert and Singletary didn’t have as much responsibility as Gradishar had, In addition to leading the Broncos in tackles for the second straight year, Gradishar led all NFL linebackers in sacks, with seven. He was voted second-team All-AFC by United Press International.

In 1977 Gradishar assisted the Broncos to Super Bowl XII, and was the heart of the defense comparable to how Walter Payton was the heart of the Chicago Bears offense. He made the Pro Bowl for the second time and began a string of six straight appearances from 1977 to 1983. Gradishar was First Team All-Pro and led a defense that led the AFC in fewest points allowed with 148 in that 14-game season and was 6th in allowing the fewest yards.  The 1977 Broncos season is documented in a new book by Terry Frei, ‘77: Denver, the Broncos, and a Coming of Age that features Gradishar, Lyle Alzado, Tom Jackson and others The 1977 Broncos season began with a 7–0 shutoutof the St. Louis Cardinals that had been one of the NFL’s top offenses from 1974–1976 that featured offensive stars like Jim Hart, Terry Metcalf, Mel Gray, Dan Dierdorfand Conrad Dobler. In a 14–7 win against the Kansas City Chiefs the Broncos made a goal line stand as time expired to preserve a win. Denver Post staff writer Terry Frei’s book, 77: Denver, the Broncos, and a Coming of Age, put it this way, “Gradishar penetrated and stopped two running plays, as Gradishar did time and time again on the goal line in his career. It was the trademark of both Gradishar and the defense overall”.

He was named consensus NFL Defensive Player of the Year in 1978 by winning the Associated Press Award, along with the UPI Defensive Player of the Year award and the NEA Defensive MVP award, receiving the George S. Halas Trophy for his efforts as the Broncos reached the playoffs for the second straight season. The Broncos defense allowed 198 points in 16 games, which was second in the NFL behind the Super Bowl champion Steelers. Additionally, Gradishar was the Football Digest NFL Linebacker of the year in 1978, an honor he repeated in 1979.

Jack Lambert is the only inside linebacker that compares with Gradishar as an all-around linebacker, come on we all know Brian Urlacher is headed to the hall and he was NOT as good as Gradishar. Maybe he was Not as nasty as Butkus, didn’t snarl like Lambert, but Gradishar made all the plays. If you say he didn’t hit like the aforementioned linebackers look at this quote from the great Walter Payton, Hall of Fame defensive lineman Dan Hampton remembers asking Walter Payton, “Walter, who gave you the hardest hit you ever took in the NFL?”. According to Hampton, Payton replied, “Randy Gradishar, 1978”.

In the end, hall-of-fame or not it is my contention that Randy Gradishar is the greatest inside linebacker in NFL history. Instead of believing what the talking heads on the NFL Network or ESPN say, watch the film of Gradishar before you go nuts and call me crazy! 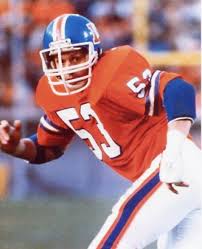 With the 2019 season officially in the books, another decade of NFL ...