The night before this legendary game, heavy rains soaked the Astroturf in Foxborough, Massachusetts. The field froze over, and conditions were made significantly worse as a snowstorm hit during the game. As a result, an emergency ground rule was put into play where the officials could call a time-out and allow the ground crew to use a snowplow to clear the yard markers. Despite this rule, the ground crew could not plow enough to keep the field clear. The two teams remained in a scoreless tie late into the fourth quarter. With 4:45 left to go in the game and on-field conditions worsening, Patriots coach Ron Meyer ordered snowplow operator Mark Henderson to clear a spot on the field specifically for placekicker John Smith. At first, no one had thought it suspicious, assuming that the plow would go straight across, and allow for a more accurate measurement (which turned out to be 33 yards). Instead, the plow veered left, directly in front of the goal post, giving Smith a clean spot from which to kick. The kick sailed through, and the win would eventually lead to the Patriots making the playoffs with a 4-5 record. C

Patriots coach Meyer gave a game ball to Henderson just happened to be a prisoner on a work release program. Miami would get revenge in the first round of the playoffs beating the Pats 28-13. Don Shula still to this day cries about this game, what people forget is in that very same year the Dolphins left the field uncovered while a rain storm fell before the 1982 AFC Championship game against a red-hot New York Jets team. This decision by the Dolphins left the field a mess and contributed big-time to their 14-0 win over the Jets. The Green Bay Packers and Tampa Bay Buccaneers played in a game called “The Snow Bowl” at Lambeau Field in Green Bay, Wisconsin. The game was known for its heavy snow. Only 19,856 fans were in attendance, with over 36,000 “no-shows,” the most in Packers history. About two-thirds of the stadium was empty. 12 inches of snow fell before the game and another four to five inches fell during the game.  Buccaneers quarterback Steve Young threw for just 65 yards, a lot of the reason was the Bucs wore their white uniforms and were hard to see because the snow was falling so hard. The Packers went on to win 21-0. 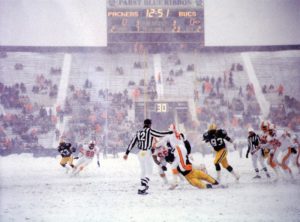 This game was notable for maybe the heaviest rain ever during an NFL game. A torrential downpour greeted the Tampa area on game day. The Buccaneers needed to win the game to clinch they’re first ever playoff berth. RB Ricky Bell was able to run the ball in the rain, getting 137 yards, but no one could score. Finally, the Bucs mounted a drive and Neil O’Donoghue booted a short field goal. The 3-0 win, sending the Bucs to the playoffs for the first time in their history. 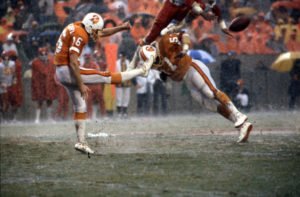 The Raiders Head Coach John Madden and Owner Al Davis both complained heavily about the frozen turf at Three Rivers Stadium, with Al Davis going so far as to accuse the Steelers of freezing the ground intentionally. Madden didn’t go that far, but he did point out how difficult it made it for the team to run plays to the outside, occurring because the edges of the field were the iciest. It still hasn’t been determined whether or not the icing was intentional, but Lynn Swann took a severe beating; he was taken out of the game after being knocked unconscious when his head was slammed into a patch of ice. The Steelers pulled the game out and went on two when their second straight Super Bowl. This game is one of the biggest reasons that the Steelers and Raiders were the bitterest of rivals in the 1970s.

It did rain in Southern California on this day. The Rams all but lost home-field advantage because of the torrential rainstorm that turned the Los Angeles Memorial Coliseum field into a mud bath. Thanks to 101 rushing yards from running back Chuck Foreman, the Vikings knocked off the Rams 14-7, to advance to the NFC Championship Game. 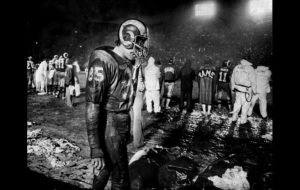 This game, which was played at Foxborough Stadium in New England, will be forever known as “The Tuck Rule game” it was undoubtedly snowy, and also bitterly cold. However, it became infamous because of a sack made by Charles Woodson on Tom Brady. Brady lost control of the ball, and the Raiders ended up recovering it, but the play was subsequently reviewed and overturned because of an obscure and stupid rule that had been entered into the books in 1999. Essentially, it said that if a quarterback is trying to bring the ball back into his body, after deciding not to release it for a pass, but it never gets there, it still counts as an incomplete pass. Brady and the Patriots finished the drive with an Adam Vinitari field goal that tied the game, and another field goal in overtime to win the game. The New England Patriots went on to win their first Super Bowl Championship, and the Oakland Raiders made the Super Bowl the next year. However, many people feel that XXXVI should belong to the Raiders to this day. 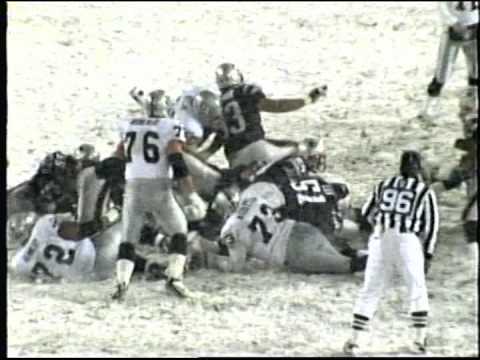 The Philadelphia Eagles had one distinct advantage in this memorable blizzard. They had the legendary Steve Van Buren. Van Buren went on to become an NFL Hall of Famer, as well as one of the members of the NFL’s 75th Anniversary All-Time team. As the two teams battled it out in snow so thick that footing became a figment of a player’s imagination, the Philadelphia Eagles eventually turned up victorious with Van Buren scoring the only touchdown in a 7-0 win. It was the Eagles first-ever league championship, and Van Buren also ran for 196 yards. Van Buren had to walk through the storm to get to the stadium to even play in the game. There was so much snow on the tarp that both teams had to help the grounds crew remove the tarp, could you imagine today’s players doing that?

The “Ice Bowl” is a game of legend in NFL lore, the temperature was -13 degrees and the tundra was most certainly frozen for this game. The game would be legendary without the weather; you had Landry against Lombardi and many halls of fame. The weather takes the game to an almost mythical nature. The game ended with Bart Starr leading a final drive that ended with Jerry Kramers block and Starr following him in for the winning TD. This game is frozen in time.

This was the coldest game in NFL history; the game-time temperature was -9 degrees. Sure the 1967 game was colder temperature-wise, but when you figure in the wind chill factor it was a brutal -59 degrees! The cold had a big-time effect on the Chargers, especially QB Dan Fouts who’s balls fluttered aimlessly around Riverfront Stadium. The Bengals, on the other hand, were led by one of the best bad weather Quarterbacks in NFL history Ken Anderson who looked like he was playing in 80-degree weather. Yes, of course, the weather hurt the Chargers, but two months before in sunny San Diego the Bengals had pounded the Chargers 40-17, so in the end, the weather did not matter the Bengals were just better. 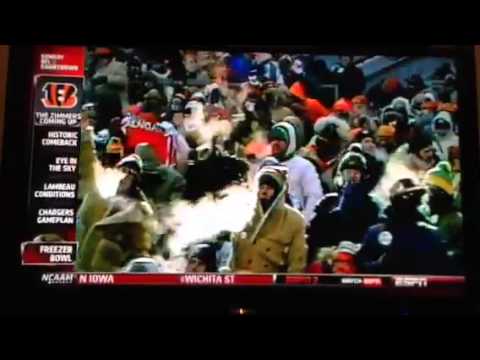 The strangest weather game in NFL history, the day in Chicago started out unseasonably warm and sunny, and let’s just say the second half was nothing but a fog! It was so bad that the fans who paid top dollar to see the game had to follow the referee’s announcements in the second half even to know what was going on. Both coaches agreed at halftime to play, and probably the strangest fact from this game was that Eagles QB Randall Cunningham threw for over 400 yards.