Richie Incognito, a four-time Pro Bowl guard, announced at the Las Vegas Raiders’ headquarters on Friday about his retirement from the NFL after a rocky 15-year career. He spent his final three seasons with the Raiders. Check out the best new sportsbooks for betting on the NFL.

In addition to his time with the Dolphins and Rams, he also spent two seasons with the Buffalo Bills. Incognito was deemed as an excellent lineman. However, he frequently broke the rules of fair play and was penalized for it. The Dolphins also suspended him for alleged racist slurs and misconduct against a teammate.

“After stepping away from football in 2018, I knew if I came back, it’d be to finish out my career on my terms, it also had to be with the right team,” Incognito said during his farewell press conference. “It felt like home the minute I got here.” 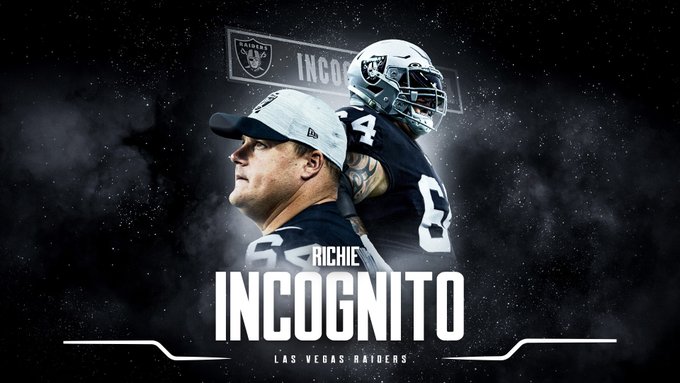 He was given a round of applause as he entered the room by the team’s members, his agent, family members, and team owner Mark Davis.

Incognito mentioned his “bad boy image” in the NFL, which received a lot of scrutiny in previous organizations. However, Davis and the Raiders trusted what he could do on the field.

“He created such a fierce leadership mentality amongst these young guys, that he’s teaching them how to become football players and how to become Raiders,” Davis said. “That’s the thing about being a Raider, they’re badasses on the field, but they’re kittens off the field.”

After a string of questionable behavior dating back to his days at the University of Nebraska, Incognito has long been considered one of the sport’s most controversial figures.

Previously, Incognito played for the Dolphins and the Bills before landing in St. Louis, which drafted him in the third round in 2005.

In 2012, he made his first of four trips to the Pro Bowl with the Dolphins. Incognito was suspended for the second half of the 2013 season and did not play in 2014 as a result of his involvement in a bullying incident involving teammate offensive lineman Jonathan Martin.

He joined the Bills in 2015 and made three consecutive Pro Bowls before retiring for the first time following the 2017 season, citing liver and renal failure.

After allegedly throwing a dumbbell at someone at a gym in 2018, Incognito was detained in a psychiatric facility. He was also arrested for threatening to shoot staff at a funeral home where his father’s body was kept. Moreover, he also admitted to two felonies concerning an incident involving his 90-year-old grandmother.

In the spring of 2019, the Raiders signed him alongside then-general manager Mike Mayock, who was quoted saying “You can’t have all the Boy Scouts,” at that time.

Even though he struggled to stay on the field, Incognito stayed out of trouble with the Raiders. He appeared in 12 games that first season while serving a two-game suspension for the funeral incident.

Incognito had an Achilles injury in week 2 of the 2020 season, which halted his season. He never played again after sustaining a calf injury last August joint training session. Nonetheless, several O-linemen attended Incognito’s media conference, indicating that he was well-liked in the Raiders’ offensive line room.

Previous article
« The Nasty Boys: The Heart of the 1990 Reds
Next article
Leadstar Media continues expansion, launching My Betting Sites in Ireland »