Le’Veon Bell said Tuesday that he would not compete in the NFL this season, saying he wanted to focus on boxing. Check out the top sports betting sites for betting on Boxing!

The 30-year-old Bell made the announcement at a news conference held by Social Gloves while promoting his upcoming fight against Adrian Peterson at Crypto.com Arena. The clash will take place in Los Angeles on July 30.

Check out the top sportsbooks for betting on Boxing

“Boxing is something that, you know, they always say it’s something you can’t play boxing,” Bell said. “Last year, I almost sat out the whole year to try to focus on boxing because I kind of knew that was what I wanted to transition to. This year, I know I’m not going to be playing this year because I want to focus on boxing.”

Bell asserted that his match against Peterson would not be a “one-off” fight for him.

“This is, I guess like my introduction to kind of show what I’ll be doing and how I’ll be going about myself. Just an intro,” he said.

Bell has been slowly making his way into the fight world. He said his technique reflected his rushing style, relying on his speed to lead him.

“I obviously feel like I’m more quick than 99 percent of the people that I’m going to be in the ring with,” Bell said. “My speed, my quickness, my timing, it’s really going to be unmatched. It’s kind of hard to explain in terms of football and try to translate it to boxing, but just my style of football you try and turn the field more and you can see. 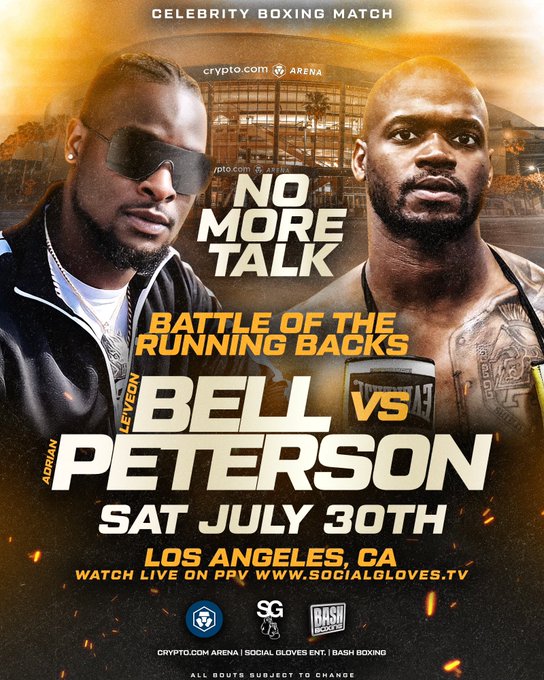 Since his 2017 All-Pro season, his career has not been the same. He rushed for 1,291 yards and nine touchdowns for the Pittsburgh Steelers, but a contract dispute prompted Bell to sign with the New York Jets as a free agent in 2019. He was released midway through the following season.

Bell recorded 429 rushing yards for four different teams in the past two seasons. Shortly after the Jets, Bell signed with the Kansas City Chiefs. Last season, Bell finished eighth in the NFL with the Tampa Bay Buccaneers. Bell has a total of 6,554 yards (4.1 average) and 42 touchdowns throughout his career.

Meanwhile, the 37-year-old Peterson appeared at the news conference via a video call. He said that while he could see his future in boxing, he wanted to leave his options open regarding his NFL career.

“This is something that I definitely can see myself doing going forward as well, just depending on how things kind of play out for me,” Peterson said.

Peterson, a former MVP and seven-time Pro Bowl selection, said there was a ring at a local gym in Houston, where he occasionally stopped by to train.

“We have a lot of guys sparring all the time, and I’ve had the opportunity in the past to get in there with those guys a couple times and here recently, obviously, getting ready for the fight,” he said.

When asked about having Bell as his boxing opponent, Peterson said that his practice had earned him the tenacity and perceived power advantage that would give him the upper hand in the match.

“I know Le’Veon is strong as well, but I will give myself the edge when it comes to being explosive and having the power,” Peterson said.