Chargers’ Mike Williams ruled out after back injury in Week 18

The Los Angeles Chargers announced Friday that their wide receiver Mike Williams was ruled out for Saturday’s upcoming wild-card game against the Jacksonville Jaguars due to a back injury he sustained during Week 18.

Williams was listed as a questionable contender after he missed out on practice throughout the week. After weeks of missing practices, NFL Network Insider’s Tom Pelissero said that despite prior X-ray and MRI results not finding any injuries on Williams, follow-up testing discovered his back fracture.

Tom Pelissero
2023-01-14 10:02
After an initial X-ray and MRI came back negative, #Chargers WR Mike Williams underwent further testing that revealed a fracture in his back that likely will sideline him a couple of weeks, per sources. Big loss for L.A. entering Saturday’s playoff against the #Jaguars. https://t.co/gPrqBX5uo4 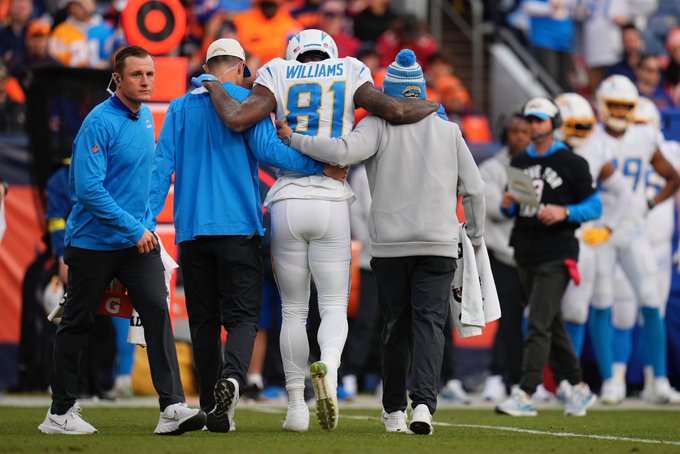 The injury would likely put Williams on the sidelines for 2-3 weeks. It would keep Williams out of the playing field until Los Angeles’s Super Bowl run. Though injured, Williams will stay in Los Angeles during the course of his treatment.

Williams sustained the injury after Los Angeles’ Week 18 loss against the Denver Broncos.

Williams passed the screen and ran five yards in the late second quarter against the Broncos before getting tackled from behind. Later, he slumped back to the sidelines before being helped by his trainers.

Williams was later found being carried by cart to the locker room.

Williams has been a significant presence in the Chargers’ lineup. After leading with 895 receiving yards in 13 games this season, Williams has had a great effect on the team’s quarterback Justin Herbert’s efficiency.

Herbert only managed no TDs, 5.8 YPA, two INTs and a 61.8 passer rating without Williams. Meanwhile, the quarterback has averaged 7.7 yards in each attempt with 7 TDs, and has had one interception and a 108.6 passer rating while playing with Williams.

The Chargers’ offense has evened out at 3.5 points and 50-plus yards in each game with Williams in their lineup.

Williams’ downgrade will force Herbert and the rest of the team to make their postseason debut without his assistance.