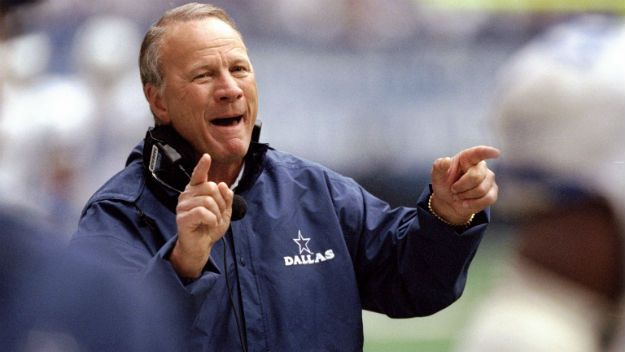 Let me start off by saying I know all of these guys were at least good coaches. Just remember, somebody has to be on the bottom of the list.

8) Tony Dungy, Indianapolis Colts – Dungy could never quite get the Bucs over the hump and as soon as he left, the Bucs won a Super Bowl. Maybe they would have won it with him, but we will never know. In Indianapolis, he consistently had dominating regular seasons only to come up short when it mattered, the playoffs. How many times can you rest your players at the end of the season until you realize that maybe that’s not the best idea?

7) Jon Gruden, Tampa Bay Buccaneers – Here is a “quarterback guru” who never could quite develop a quarterback as a head coach. Gruden did bring the Raiders back from almost a decade of ineptness and he did win a Super Bowl against the Raiders, but the rest of his career he was pretty much a .500 coach. Maybe he takes himself off this list in Oakland but I doubt it.

6) Mike Ditka, Chicago Bears – I know 1985 was one of the greatest teams of all time. My question to you would be, why didn’t they go back after 1985? Buddy Ryan left and the defense was never the same. Ditka also never could find the right quarterback, but no excuses here. The 1986 and 1987 Bears didn’t make it back to the Super Bowl because Joe Gibbs and Bill Parcells were just better coaches. What didn’t help matters was Ditka was convinced that Doug Flutie may have been the answer. Plus, you have to include his three years with the Saints, which were an absolute mess.

5) Mike McCarthy, Green Bay Packers – McCarthy is a good coach. But that’s where it ends. He presided over a very fortunate playoff run in a season where his team never should have made the playoffs. That said, it’s his decision-making and lack of ability to make adjustments in the postseason that has him on this list.

The best example of a promising season coming to an end due to his conservative coaching is the 2014 NFC Championship collapse.

3) Don McCafferty, Baltimore Colts – Don McCafferty was only in the NFL for four seasons. He stayed with the Colts through the 1972 season before taking over for the 1973 Detroit Lions. He, unfortunately, suffered a fatal heart attack while cutting the grass before the start of the 1974 NFL season. McCafferty was only 53 years old. McCafferty doesn’t get a lot of credit for the 1970 Colts but he should. Part of the reason that Shula left the Colts may have been because they were getting old, but McCafferty lead the Colts to a Super Bowl win something, Shula never accomplished in Baltimore. Maybe if he doesn’t tragically pass away at such a young age he wouldn’t even be on this list, but there is no way to know that for sure.

2) Gary Kubiak, Denver Broncos – As a head coach Kubiak has a 73-68 regular season record, winning only 51.8% of his games. He took over the Broncos in 2015 and won the Super Bowl that year based on a great defense that was coached by Wade Phillips. Remember the Broncos were in the Super Bowl two years earlier, so it wasn’t like he had to build a team. This team won because of the defense, led by Phillips, and the front office led by General Manager John Elway.

1) Barry Switzer, Dallas Cowboys – Switzer was a great college coach, but then again his players at Oklahoma may have been better taken care of then the Cowboys. Switzer walked into a perfect situation and after dropping the 1994 NFC Championship game to the 49ers, he came back to beat the Packers in the 1995 NFC Championship game and eventually beat the Neil O’Donnell-led Steelers in the Super Bowl.  Switzer went 40-24 during his regular season with the Cowboys and 5-2 in the postseason.What hurts Switzer’s NFL legacy the most is, Cowboys owner Jerry Jones was probably right when he said that anybody could have won a Super Bowl with The Triplets (Troy Aikman, Emmitt Smith, and Michael Irvin).

Let me tell you what you should be mad about, Raider...