25 years ago today, Dan Marino and the Miami Dolphins topped the Kansas City Chiefs in the AFC Wild Card game to end the legendary career of Joe Montana.

The final meeting between the two legends however, went the way of Marino and brought about the end of Montana’s legendary career. On this day 25 years ago, Marino’s Dolphins soared past Montana and the Kansas City Chiefs in the AFC Wild Card playoff, 27-17.

The Dolphins had finished the regular season with a record of 10-6 and as AFC East champions as they arrived at Joe Robbie Stadium on Dec. 31, 1994. The Chiefs finished 9-7 and clinched a playoff spot with a 19-9 win over the Los Angeles Raiders during the final weekend of the regular season.

Early on, it was Montana who stole the show. The Chiefs raced to an early touchdown lead as the veteran threw first-quarter touchdown passes to tight end Derrick Walker and then a 57-yard scoring strike to fullback Kimble Anders. Those two touchdown tosses were sandwiched around a 1-yard touchdown run by Miami’s Bernie Parmalee.

After Miami’s Pete Stoyanovich and Kansas City’s Lin Elliott traded field goals early in the second quarter, the Dolphins drew even late in the half and never looked back. In the final minute of the second quarter, Marino capped a 13-play, 80-yard scoring drive with a 1-yard touchdown pass to reserve tight end Ronnie Williams to knot the score at 17 at the break.

Miami took its first lead and went ahead for good on the opening drive of the second half. Marino capped the march with a 7-yard touchdown toss to Irving Fryar. From there, the Dolphins’ defense would do the rest.

Stoyanovich’s second 40-yard field goal of the day later in the third quarter would cap the scoring, but Miami cornerback J.B. Brown and safety Michael Stewart would come up with big plays to help preserve the victory.

Up 27-17, Brown intercepted Montana near the goal line early in the fourth quarter to help keep it a 2-score game. On the next drive, Stewart ripped the ball from the hands of Chiefs’ running back and future Hall of Famer, Marcus Allen, to give the Dolphins the ball back. 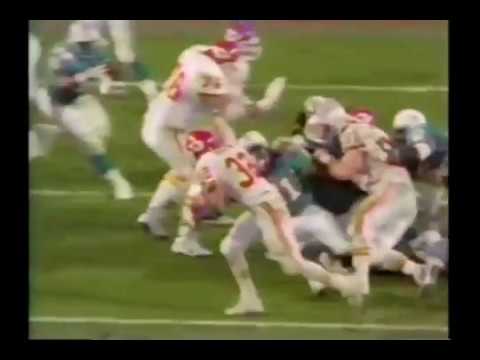 The two turnovers proved to be major difference-makers as the Dolphins avoided giving the ball away. Montana passed for 314 yards in what would be his final NFL game while Marino threw for 257 yards on 22-for-29 passing. Anders led all receivers with 103 yards while Allen was the top rusher with 64 yards on the ground and a game-high 113 yards from scrimmage. Parmalee rushed for a team-high 57 yards to go with a team-high 91 yards from scrimmage for Miami while Fryar paced the Dolphins with 71 yards receiving.

Although he fell well short against Montana in the Super Bowl showdown a decade prior, it was Marino and the Dolphins that ultimately brought the legend Montana’s career to an end. That victory came on this day a quarter-century ago.

Previous article
« Why Home Field Advantage Is Not As Big a Deal As It Used To Be
Next article
TGT Presents On This Day: December 31,1972, The Miami Dolphins Beat the Pittsburgh Steelers to Win the AFC Championship »

Picking every Bowl game against the spread!