The Grueling Truth - Where Legends Speak / NFL / 1970 Detroit Lions: What might have been

The 1970 Detroit Lions rocked. They finished 10-4, winning their last five games. They had the distinction of being the very first Wild Card team in NFC history. The AFL-NFL merger made its debut in 1970, and back then only one Wild Card was allowed into the playoffs. And the Lions made a mad rush to the finish line to be that team.

The 1970 Lions were a high-scoring club with a shutdown defense. A good combo, hence the 10-4 record. They went into the playoffs against the Dallas Cowboys, in the Cotton Bowl. And the Lions lost 5-0. You heard me. 5-0.

The Cowboys’ offense could only manage a field goal, and the defense chipped in with a safety. And that’s all they needed to beat the Lions, who were shutout for the only time all season.

The Lions barely crossed midfield all day, but they had one last gasp drive in them. Landry had been replaced by Bill Munson in an effort to shake things up. Munson led a gallant effort in another against-the-clock, frantic drive. The Lions crept closer to the Cowboys’ goal line. They made it to around the 35-yard line. But Munson’s pass to Earl McCullouch near the 20 was a tad high, and the ball went off Earl’s fingertips, to be intercepted by Mel Renfro.

The Lions were led by Head Coach Joe Schmidt, who was a great player for the lions and as a coach had slowly improved the team each year. Actually, he retired in 1972 with a winning record, the last Lions coach to pull that off.

The Lions had some truly great players like Cornerback Lem Barney who played college football at Jackson State from 1964 to 1966. He was drafted by the Detroit Lions and played for the Lions as a cornerback, return specialist, and punter from 1967 to 1977. He was selected as the NFL Defensive Rookie of the Year in 1967, played in seven Pro Bowls, and was selected as a first-team All-NFL player in 1968 and 1969. He was inducted into the Pro Football Hall of Fame in 1992. Barney was one of the greatest cornerbacks in NFL history and still claims to this day that if the Lions had beaten the Cowboys they would have won the Super Bowl. 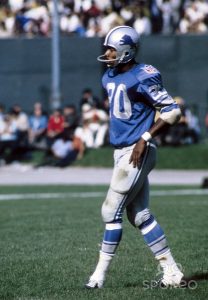 Another great player on that 1970 Lions team was tight end Charlie Sanders, Sanders was another member of this team that would become a hall of Famer. The Lions chose him in the third round of the 1968 NFL Draft, and he became their starting tight end for the next ten seasons. He had 336 career receptions for 4,817 yards and 31 touchdowns. He was also known as a superior blocker. He was chosen for the Pro Bowl seven times (1968–1971 and 1974–1976). He was the only rookie to be named to the 1969 Pro Bowl, following a season where he had 40 receptions for 533 yards. Sanders was named to the All-Pro First Team for the 1970 and 1971 seasons, receiving the most votes of any player in both years. During an exhibition game in 1976, Sanders injured his right knee, ending his career. 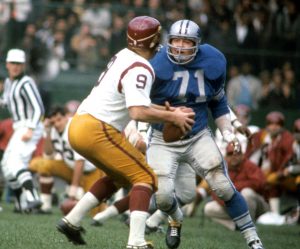 The 1970 Detroit Lions may have been the greatest Lions team ever, I know in the 1950’s the Lions won NFL Championships, but the 70 team was so talented they were hard to ignore. I agree with Lem Barney when he said that a win over Dallas in that 5-0 game would have led to the Lions winning the Super Bowl.