The 10 Worst Performances by a QB in NFL Playoff History

You just knew the guy who lost an NFL championship game 73-0 would be on this list somewhere. The Great Sammy Baugh started the game for Washington, passing for 102 yards and two interceptions before getting hurt, eventually giving way to Frank Filchock. Filchock completed just 7-of-23 passes with no touchdowns and five picks. That translated to a passer rating of 3.6, which translates to a 73-0 loss.

Find the best site to bet on the NFL!

Check out the top sportsbooks bonuses

Let me start by saying Culpepper was not the sole reason the Vikings lost this game. In truth, it looked to me like the entire team laid down.

Believe it or not, the Giants scored on their opening drive, recovered a fumble on the ensuing kickoff, and scored on the very first play of the next possession. So, Daunte Culpepper did not enter the game until his team was 14-0.

Culpepper was 13-of-28 for only 78 yards, zero touchdowns, and three interceptions. 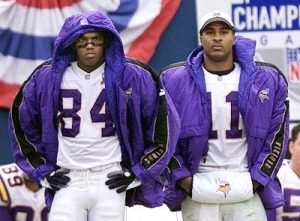 2011 was a magical season for the Broncos and Tebow; he rarely played a complete, consistent game. But do not let him get in the fourth quarter of a close game. Just ask the Pittsburgh Steelers, who were shocked by a Tebow TD pass in OT.

The problem was that he had to go to New England; to say that did not go well.

By the time the game had ended, Tebow didn’t have any turnovers, but he was only 9-26 with no touchdowns. Denver lost 45-10 in what would turn out to be Tebow’s last game to start as an NFL quarterback.

Manning was never known as a great big game quarterback, even in Tennessee. The first glimpse of this in the NFL was this wild card game in New York.

Peyton Manning and the Indianapolis Colts were dominated 41-0 by the New York Jets. He finished the game, completing 14-of-31 passes for 137 yards, no touchdowns, and two interceptions. This game also moved his playoff record at the time to 0-3. 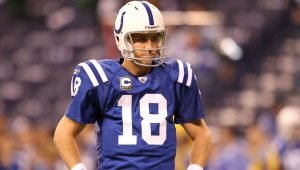 Matt Cassel against the Baltimore Ravens was dismal. Cassel completed half of his passes, going 9-of-18 with only 70 yards passing, no touchdowns, and three interceptions. The Chiefs did lead early, but not for long, losing 30-7.

Jake Delhomme was a good NFL quarterback who even led the Panthers to Super Bowl XXXVIII, where they lost in the last seconds to the Patriots.

The Panthers lead early, and then it got ugly as Delhomme finished 17-of-34 with 205 yards passing, one touchdown, and five interceptions; the Panthers ended up losing 33-13 at home to a 9-7 Cardinals team that would end up in the Super Bowl.

I still do not understand why the Patriots started Eason over veteran Steve Grogan in this game. The Patriots ended up losing 46-10, which was the worst loss in Super Bowl History. Eason was a dreadful 0-6 and was sacked three times before Steve Grogan.

That’s right, Eason started in the Super Bowl and failed to complete even one pass. There is no doubt in my mind that if Eason had played the whole game, he would be number one on this list.

Jim Everett was outstanding in his early career with the Rams; during the 1989 season, he even won a game over the 49ers and almost made it 2-2 in the regular season.

Then came the 1989 NFC Championship game. Everett was terrible on the day, and his stats show it 16-of-36 with no touchdowns and three interceptions in a bad 30-3 loss. He became so shell-shocked by the constant beating from San Francisco’s pass rush was so relentless Everett, at one point, fell to the grass, giving up a sack despite not being touched, which led to Jim Rome calling him Chris Everett and Everett preceding to have a massive meltdown about it. Chris Evert is the one who should have been mad. Check out the best bookmakers for betting on the NFL!

Check out the top sportsbook bonuses for betting on the NFL!

The Chiefs scored on the first play of the game, and unfortunately for the Texans, it only got worse from there. Hoyer’s performance was beyond terrible. He finished the game, completing 15-of-34 passes for 136 yards with four interceptions; one lost a fumble and no scores — an awful game.

Considered by most an all-time great quarterback until it became playoff time. Favre had a lot of last-minute meltdowns that cost his team’s games, but this game’s debacle was all game long.

Favre his first pick-six on the second pass of Green Bay’s second drive. Unfortunately for Favre and the Packers, it would not be his last, not even close to his last. Favre ended the day 26-of-44, passing for 281 yards and two touchdowns, which are not bad numbers. Too bad for Favre that he also threw an astounding six interceptions, with an incredible three of them getting run back for a touchdown, leading to a 45-17 loss.