The Grueling Truth - Where Legends Speak / Marion Motley: The Most Underappreciated Running Back Ever

Marion Motley: The Most Underappreciated Running Back Ever

Marion Motley was born in 1920 in Leesburg, Georgia and was raised in Canton, Ohio.  His family moved to Canton when he was three years old. Motley attended Canton Mckinley High School where he excelled at Football and Basketball. He led McKinley to a 25-3 record as a fullback and linebacker where their only three losses were to rival Massillon who were coached by the legendary Paul Brown.

After graduation, Motley enrolled at South Carolina State University in 1939. He transferred after his freshman year to the University of Nevada-Reno where he starred from 1941-43. After suffering a knee injury, Motley returned to Canton to work after dropping out of school.

Motley joined the U.S. Navy in 1944.  As World War 2 intensified, he was sent to the Great Lakes Naval Training Station where he played for the Great Lakes Blue Jackets, coached by his old rival Paul Brown. Brown was serving in the Navy during an extended leave from Ohio State where he was the head coach. Motley played fullback and linebacker and was an important component of the teams offense and defense. The highlight, while at Great Lakes, was a 39-7 beating of Notre Dame in 1945. Motley was actually eligible for discharge before the game – it was to be the final game of the season and the last military game of World War 2 – but he stayed to play.  Motley put up an impressive performance, thanks in part to Brown’s experimentation with a new play; a delayed hand off, later called the Draw Play.

Paul Brown, in the summer of 1946, became the coach of the Cleveland Browns in the newly formed All-American Football Conference. Motley wrote to Brown asking for a tryout but Brown declined, saying he already had all the fullbacks he needed. At the beginning of August, however, Brown invited Bills Willis, another African-American star, to try out for the team at its training camp in Bowling Green, Ohio. Ten days later Brown invited Motley to come to camp as well.

Motley and Willis were the first two African-American players signed by the AAFC.  Around the same time, the Los Angeles Rams singed Kenny Washington and Woody Strode to contracts in the NFL. The Rams were forced to sign the players because a group of Black sportswriters had pressured the L.A. Coliseum to stipulate that, before it could use the publicly funded Coliseum, the Rams integrate upon the franchise’s move from Cleveland.

The Browns dominated the AAFC, winning all four league championships before the franchise was absorbed by the NFL.

Motley averaged 17.09 yards per rush in a 188 yard performance in 1950 against the Steelers which held up as an NFL record for 52 years.

While the Browns proved to be an elite team in the NFL, advancing to six straight championship games in it’s first six years in the NFL, injuries slowed Motley, who eventually retired before the 1954 season. Motley finished his career averaging 5.7 yards per carry which is most for an NFL running back with at least 750 carries even surpassing the great Jim Brown who averaged 5.2 per carry.

Motley, after his career, had a dream to be an NFL coach.  Motley asked Paul Brown for a job on his staff and Brown told him that “instead of coaching, go look for a job at a steel mill”, Motley also asked his old QB Otto Graham for a coaching job, but was also turned down for that job.  Motley fought racism his entire life on the field and off and remains largely unappreciated in pro football history because of the injuries that shortened his career. He got his just due finally in 1968 when he became the second African-American player in history to be elected to the Pro Football Hall-of-Fame. Motley finished out his life working for the United States postal service, but he will always be remembered as one of the toughest running backs in NFL history. 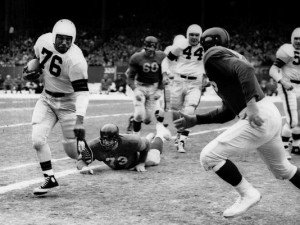