The Grueling Truth - Where Legends Speak / Kenny Easley: The Enforcer

There are NFL safeties that often get remembered for bone-jarring hits such as Ronnie Lott, Jack Tatum, Steve Atwater, Troy Polamalu, and John Lynch. There are also safeties that were exceptional in defending the field and forcing turnovers like Paul Krause, Ed Reed and Donnie Shell, but there was a safety in Seattle that was as good as any safety that ever played. Check out the best bookmakers for betting on all of the games!

Kenny Easley was a 6’3 All-American from UCLA, who after only one game during his freshman season, became a starter. After becoming the Bruins’ all-time leader in interceptions (19) and being named first-team All-Pac-10 for each of his four seasons, Easley was one of the most sought after defensive players in the 1981 draft.

He recalled wanting to play for the San Francisco 49ers after being in talks with their representatives, who said they were going to draft him. But it would be Seattle, who after a 4-12 season the year before, would draft him at the number four spot and make him the centrepiece of their defense. San Francisco ended up with the man who ended up being one of Easley’s biggest fans, Hall of Famer Ronnie Lott.

Easley had good size and instincts, which were aided greatly by his love for basketball. He played at the junior-varsity level at UCLA and was even drafted by the Chicago Bulls in the 10th Round of the 1981 NBA Draft. While he chose to play football, his basketball abilities assisted him in his ability to play safety for the Seahawks.

Long before he was destroying receivers over the middle or intercepting would-be touchdowns, he was a fan in his living room at 6 years old watching his television in Virginia with his family. He recalls watching everyone get so excited over a game that was on TV and began to dream about playing in the NFL one day.

“Looking at all those people in the stands, and listening to the announcers, and all that excitement, I was hooked right there on the spot,” Easley explained. “‘This is what I want to do. I want to be a pro football player.’” We have the breakdown on all of the newest sportsbooks!

He certainly became a pro football player and didn’t waste any time becoming a great one. In 1981, he racked up 107 tackles, 3 interceptions and returned one of them for a career-long 82-yard touchdown. It was his leadership and play on the field that began to turn around the Seahawks’ defense and he was given the 1981 AFC Rookie of the Year honors by the Associated Press.

Going into the 1983 season, the Seahawks had only two winning seasons in their franchise’s history and no playoff appearances. It seemed like this would be another typical year for the Seahawks as they struggled to put together consistency in the win column, only being two games above .500 only one time. Anyone that remembers the Seahawks of the 1980s remembers how much fun they were to watch. Jim Zorn and later Dave Kreig were good quarterbacks who would often find an open Steve Largent for a touchdown. Exciting running back Curt Warner would gash defense for yardage. But it was Easley that would help make Seattle an intimidating defense and would be the driving force behind Seattle’s playoff runs of the mid-1980’s. 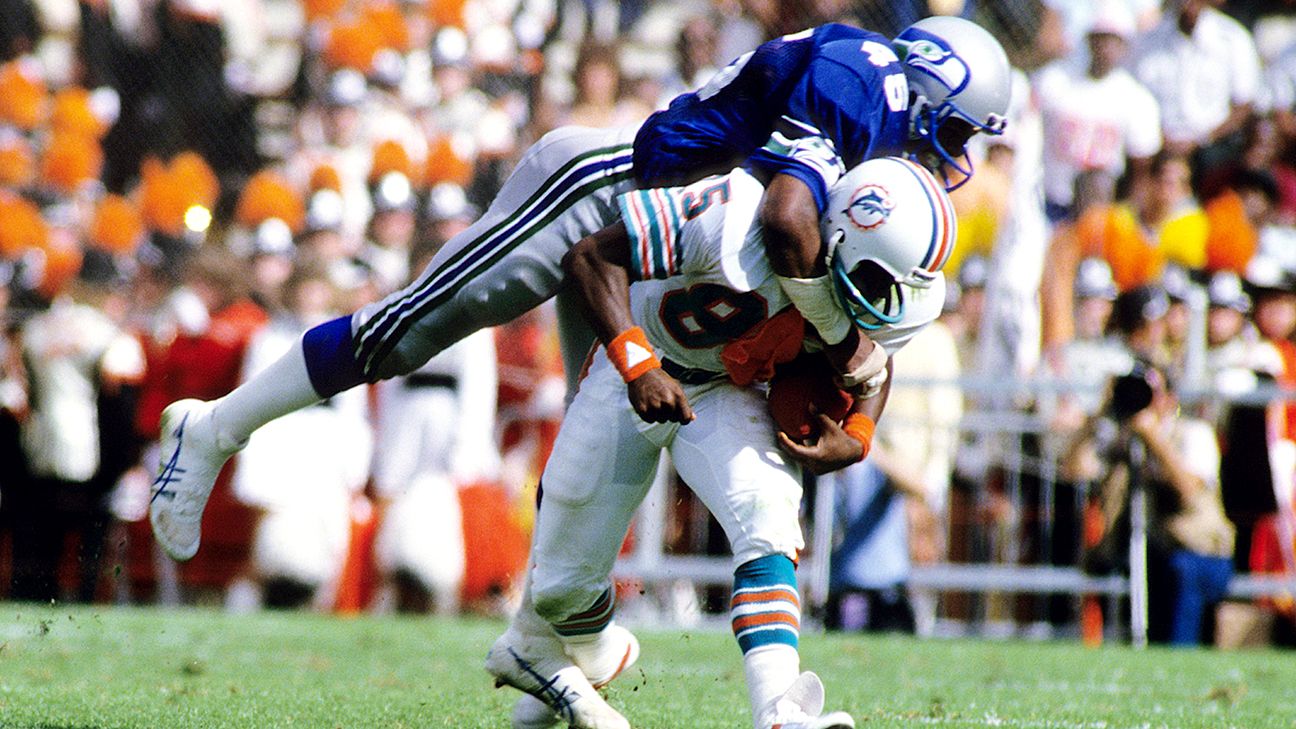 Despite the struggles, Easley would lead the team with 7 interceptions and the defense would keep the team in most games, giving them a chance to win.

After getting blown out at home by the Dallas Cowboys in Week 14, they were 7-7 and needed to win their final two games in order to finally make the postseason. Following a hard-fought win over the Giants by a score of 17-12, the Seahawks would need to beat New England in the Kingdome and they would be in the playoffs.

In a close battle at the half, the Seahawks led 10-6 and New England would never score again. It would be a key Kenny Easley interception that would help seal the game and send the Hawks to the postseason for the first time in their history.

For Seattle fans, it would be a storied playoff run. They started off by beating their division rival, the Denver Broncos, with rookie John Elway, 31-7 in the Kingdome. Next they traveled to Miami to face another rookie who would eventually make the Hall of Fame, Dan Marino. In both games, the defense stepped up and made sure victory would be theirs.

While the Seahawks would lose in the AFC Championship Game against the eventual Super Bowl Champion Los Angeles Raiders, the Miami game meant a lot to Easley.

“We went to the AFC Championship game and lost to Raiders ultimately, but that’s when the Seahawks made our announcement as a contender on that stage. It was a pretty great win, the most memorable for me.” (from “Kenny Easley: Giving It All“)

The following year was probably Easley’s best. He finished with a NFL-leading 10 interceptions, returning two for scores, and was named the NFL’s Defensive Player of the Year. Easley would do it all, patrolling the field, delivering crushing hits, and even showcasing his skills as a PUNT RETURNER.

Seattle would finish 12-4 and win the Wild Card game, dethroning the Champion Los Angeles Raiders. While they would lose in the Divisional round to Miami, it was a season to remember. It would also be his final great season.

Injuries began to take their toll on Easley and to combat the pain, at the direction of his trainer, Easley would begin taking massive amounts of aspirin to the point where 3 years later, his kidneys were shutting down and he was actually in jeopardy of losing his life.

In 1988, after being traded to the St. Louis Cardinals, he would have to immediately retire and take care of his health. This led to lawsuits against the Seahawks’ doctors and trainers and a 15-year rift that would eventually heal.

Looking back, Easley would be remembered as one of the best safeties that ever played the game, despite his short career. Ronnie Lott praised Easley when he said, “It’s hard for me to say this, but there was only one guy that I know that’s better and that’s Kenny Easley. He was defensive player of the year and the best player to play the safety position, ever…When I look at Kenny and I look at myself, the only thing that separates us is Kenny didn’t get a chance to do it as long. That’s the only thing.”

Easley finished his career as the 1981 AFC Rookie of the Year, a four-time All-Pro, a five-time Pro Bowler, 1984 Defensive Player of the Year, named to the NFL’s 1980’s All-Decade Team, and even ran a Seattle Newspaper in 1986 called “Inside the Seahawks”.

After taking care of his health with a kidney transplant, he and former Bills defensive end Bruce Smith was named owners of the Norfolk Nighthawks of the AF2, a semi-professional arena football league, in 1999.

In 2002, Easley became the 6th player inducted into the Seahawks Ring of Honor and was an honorary team captain for the Seahawks for Super Bowl XLIX.

While it’s a shame that Easley does not get the accolades nor the recognition for his greatness, despite the shortened career, those that watched him remember the impact that he had on the game. For Seahawks and any NFL fan, he will always be remembered as, “The Enforcer”.

Finally, in 2017 Easley was finally given his rightful place in Canton, Ohio!

Dawkins defined the word leader, both vocally and with his attacking style ...