Up until this offseason, there hasn’t been a more feared receiver than 6’5″ Calvin Johnson from the Detroit Lions, also known simply as, “Megatron”.

He can blaze past corners with his “4.35” speed and practically jump out of a building with his 43 inch vertical. It would seem difficult to imagine there being a bigger receiver than Megatron. But there was. The tallest receiver in NFL history. His name: Harold Carmichael.

Six feet, eight inches tall. Simply put, with a frame like that, he could match up with anyone physically. But it was his quickness for a big man that made him downright dangerous. He could move like a man who was about six feet tall, but could muscle his way through defenders in the red zone on his way for a score. He was almost uncoverable.

To find the best site to help you bet on NFL games click here!

Carmichael was drafted in the seventh round of the 1971 draft. Not knowing exactly what his role would be, he often rotated between playing tight end and wide receiver, but also struggled with injuries. By 1973, he was the NFL leader at wide receiver with 67 catches for 1,116 yards and 9 touchdowns. He had found his position and he stayed at wide receiver until he retired in 1984. 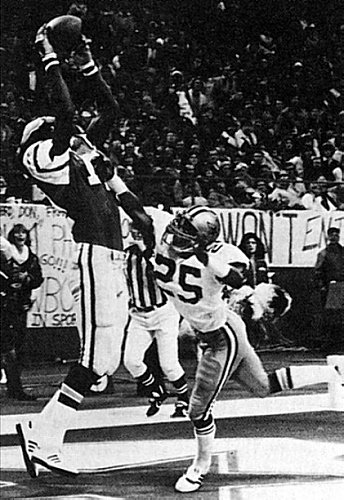 Most of the 1970’s were not kind to the Eagles. From 1970 to 1977, the most games the Eagles had ever won in a season was a mere 7. Carmichael put up good numbers and even had NFL great Roman Gabriel throwing to him. But they didn’t win. Carmichael wasn’t able to show what he could do in a big situation.

The Eagles traded for Ron Jaworski in 1977, giving them their quarterback of the future. It sure helped his career by having a receiver like Carmichael who could out-jump and out-muscle most NFL cornerbacks. He made Jaws’ job easy.

Carmichael was the driving force behind the Eagles’ success. He had the speed and ability to get the ball into the opponent’s red zone, but he also was the primary target once they reached it. He could go over the middle, run a fade, or even a short wide receiver screen and push over defenders on his way to touchdowns. Amazingly, thirteen percent of all his catches for his career went for touchdowns.

The Eagles were better by 1978 and now Carmichael could showcase his talents in the playoffs. His six catch, 111 yard, one touchdown day helped Philadelphia beat Chicago in the 1979 Wild Card game, and then followed that performance up with a three catch, 92 yard day with another touchdown as they nearly defeated Tampa Bay. He even played well in Super Bowl 15 with five catches for 83 yards.

There is also an argument that can be made that he is deserving of enshrinement at Canton. He was a member of the 1970’s All Decade Team and he finished with more catches, yards and touchdowns than three other 1970’s Hall of Fame wide receivers: Lynn Swann, John Stallworth, and Paul Warfield (Warfield had 6 more touchdowns). Carmichael had 4 Pro Bowl appearances and had a catch in an amazing 127 straight games, which was the record at the time.

It would be both interesting and fun to see how Carmichael would fare in the modern, wide-open passing era that is today’s NFL. At 6’8 and with his quickness, there’s no doubt about how great he would be. Any fan that watched him play knew that he was a receiver that would dominate in any era, and he certainly did just that during his great career.