The Grueling Truth - Where Legends Speak / Pro Football / Greg Cook: He Could Have Been The Greatest Ever!

Greg Cook: He Could Have Been The Greatest Ever!

I am about to tell you the story of a man not even the most devout football fans have probably heard of. If you live in Cincinnati, you have most undoubtedly heard the story of Greg Cook.  And you probably heard it from your dad like I did. As a Bengals fan that grew up in the 1970’s and 80’s, every time the Bengals lost a big game I would hear the story of Greg Cook. In Cincinnati, Cook is almost a mythical figure.  He was a man, as the story goes, that if he didn’t get hurt would have won the Bengals multiple Super Bowls. I know that sounds crazy, the Bengals winning multiple Super Bowls? Well, when you figure in that Bill Walsh called Cook “the most talented quarterback he had ever seen” it doesn’t seem that far-fetched.

Cook was born in Dayton, Ohio about a half hour away from Cincinnati.  He was a 3 sport star in High School (Baseball, Football and Basketball). After High School, he decided to play his college football at the University of Cincinnati where he grabbed the attention of Bengals head coach Paul Brown and his offensive coordinator, Bill Walsh. At Cincinnati, he set more than a dozen passing records and passed for 554 yards in a single game. Brown, after seeing the film, was convinced Cook should be the Bengals’ number one draft pick. 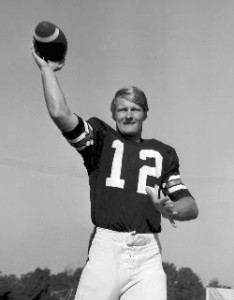 the Bengals actually released John Stofa, their starting quarterback from the previous year, before they were even out of training camp.

Cook proved Brown right by leading the Bengals to three straight wins to begin the season, even upsetting the Chiefs in week 3. During the Chiefs game, Cook felt a pop in his right throwing shoulder after being decked by LB Jim Lynch. Cook returned in week 8 to lead a huge 31-17 upset of the Oakland Raiders, a loss that would be the Raiders’ only loss during the 1969 season. Due to limited medical technology at the time, Cook suffered a torn rotator cuff that went undiagnosed.

Cook amazingly went on two finish the 1969 season later saying “I took cortisone shots and played in pain but the shoulder hadn’t started to deteriorate yet so I could still function.  I still had the strength.  I felt obligated to finish the season.”  Despite a torn rotator cuff, Cook went on to pass for 1,854 yards. His 9.4 yards per attempted pass and 17.5 yards per competitions are rookie records that still stand today. Cook was also named the AFL Rookie of the year.

Surgery after the season showed a torn rotator cuff and also a partially torn bicep, after a short-lived comeback attempt in 1973, Cook permanently retired.

It may seem a stretch to proclaim a man who didn’t even complete his rookie season a great NFL quarterback.  However, when you watch the film and see that Greg Cook could make every throw on a football field, it doesn’t seem so far-fetched. He had the prototypical QB size – 6’ 4” and 220 lbs.  Bill Walsh, while talking to NFL Films, said Cook “threw, by far, the best deep ball of any quarterback he ever saw”. Walsh called him a combination of “(Terry) Bradshaw’s size and strength with (Joe) Montana’s instincts and feel for the game”.

It is true that we will never know how great Greg Cook could have been just like we will never know what else would have happened with Bo Jackson’s career without the hip injury. Maybe the Bengals would have become the dominant team in the 70’s instead of the Steelers.  We’ll never know. That’s the great thing about sports if not life in general.  At any point, one wrong move here or a right move there and history can easily be changed. I don’t think there’s any doubt that in Cincinnati,50 years from now, there will be somebody telling his son the story of Greg Cook.  It’s a story that needs to be remembered and re-told.

My Dad, the Dodgers and Me: A Love Story

Get your Free Bet now!
Latest News
Fury/Chisora III, coming this December, whether we want it or not
Tyson Fury has not yet decided to quit boxing and ...
Top 10 NFL Defensive Secondary Rankings for 2022, by Positional Unit
Top 10 Today we will look at the ...
Jets Offensive Tackle Mekhi Becton likely out for the season
Jets offensive tackle Mekhi Becton will likely miss ...
Joe Joyce and Joseph Parker to fight September 24: Which Joe you got?
Joe Joyce and Joseph Parker to fight September ...
College Football Team that will bounce back in 2022: Florida Gators
Bounce Back teams Florida Gators 2021 PRESEASON RANGINGAP ...
Sports Betting Deposit Methods
Best Sports Odds
Betting Tips
Betting Tip: Cleveland Guardians vs Detroit Tigers
Tip:
Total Hits
Odd:
1.86
Current Bonus:
Bet $1, Get $200