I think it’s interesting how some of sports’ most impressive dynasties could have easily not existed without a few key things going their way at the exact right time.

Today, I am looking at the case of the New England Patriots, one of the most despised franchises in professional sports, yet one whose run of dominance is almost unparalleled by any other team in any American sport. Led by Tom Brady and Bill Belichick, the Patriots captured six Super Bowl Championships between the years 2001 and 2018.

This isn’t to say that the Patriots’ dynasty didn’t receive share its share of criticism of illegitimacy; cheating allegations aside, the Patriots benefited from many key plays going their way throughout their run.

The first of these can be seen in their run of Super Bowl XXXVI, their first championship. The first infamous “Patriots momentum” occurred in the Divisional Round of the playoffs against the Oakland Raiders, known as the “Tuck Rule Game.” I’ll let the clip speak for itself. But this wasn’t called a fumble, and the Patriots were able to keep the ball and force overtime, where they won they were able to win and advance. The Raiders were never the same after that game. Who’s to say that fate didn’t await the Patriots if they had lost? 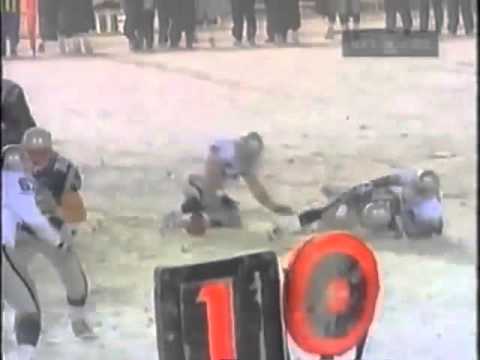 The Super Bowl itself also had close calls for the Pats. In the fourth quarter of the game, The Patriots were leading the game by with a comfortable lead of 17-3, and the Rams hadn’t scored since the first quarter. Despite this dominating defensive display, Kurt Warner and the Rams, AKA “The Greatest Show on Turf,” lead a furious comeback to tie the game at 17-17 with 1:30 to play.

What happens next is the beginning of a long history of Tom Brady winning drives. However, he needed Adam Vinateri to finish the job from 48 yards to capture the ring. Maybe, if he misses that Field Goal, the dynasty isn’t established.

A similar story could have been seen two years later in Super Bowl XXXVIII, where the Patriots played the Panthers. With 1:08 to go in the game, the Panthers tied the score at 29-all with a touchdown drive. However, on the ensuing kick-off, the kick went out of bounds, giving the Patriots the ball at their own 40-yard line rather than the 20 or even deeper, depending on kick coverage. With the Patriots only needing a field goal (which Vinateri would convert from 41 yards), this was a huge break for Brady and the offense, as they only had to go a short distance while armed with all three of their timeouts. That isn’t to say Brady couldn’t have gone the extra 20 yards, but it is a huge break in the biggest moment of the biggest game of the year, especially considering that Vinateri had missed a previous try from 36 and had one from 31 blocked.

Malcolm Butler’s interception against Seattle is perhaps the most famous in NFL history and was instrumental in Brady capturing his fourth Super Bowl Title. However, the sports community will never stop asking why Pete Carroll decided to call a slant route with Marshawn Lynch in the backfield. I think it’s safe to say that Brady and Patriots caught a massive break here.

The Malcolm Butler Interception | Do Your Job: Bill Belichick & the 2014 Patriots | NFL Network

The Patriots again needed several huge breaks in the Super Bowl to mount their legendary 28-3 comeback against Atlanta. Despite this seemingly overwhelming deficit, the Patriots came storming back into the game in the second half. After bringing the game within 8 points with a Touchdown and two-point conversions, the Patriots needed 1 more stop to give the ball back to Brady with a chance to tie the game.

With less than five minutes to play, the Falcons only needed a field goal to ice the game. On a big second down play nearly at midfield, regular-season MVP Matt Ryan scrambled from the pocket and delivered a 27-yard pass to Julio Jones that seemed to seal the game by bringing the Falcons into close field goal range. Had the Falcons won, this would have been the play of the game. This catch is absolutely spectacular.

However, the next three plays went almost as bad as possible for Atlanta. After losing 1 yard on first down, Matt Ryan dropped back to look for pass that would deliver the final blow to New England. However, protection quickly broke down and Ryan was sacked for a loss of 12 yards. On the following third down, the Falcons played it safe with 23 yards between them and the line to gain. They threw a short route to Mohammed Sanu for what would have been an eight-yard gain. The following play would have been a 49 yard field goal from an inside stadium. With Matt Bryant kicking, there’s a very good chance the Falcons would go ahead by 11 points and take home the Lombardi Trophy.

However, that critical positive play was wiped away after the Falcons were called for holding. After another incompletion, they were forced to punt the ball back to New England. They tied the game on that drive, and the rest of the game is history. New England’s comeback was not entirely of their own virtue, but their opponents committed errors and New England made them pay for it.

It’s said that championship teams make the big plays in the biggest moments. New England has always risen to the occasion, but big moments sometimes went their way by luck rather than merit. As I’ve discussed, 4 of the Patriots 6 titles had a substantial amount of luck involved with them. But either way, you choose to see it, this dynasty has been a beautiful thing. With Coach Belichick in the spotlight more than ever, it will be interesting to see if Cam Newton can continue the excellence the Patriots have personified over the past 20 years.