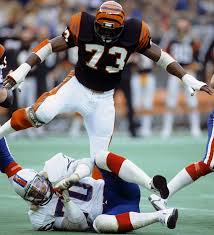 Now before continuing to read this article, and without doing a Google search, how many of you could have named the Bengals’ all-time sack leader? The truth is Eddie Edwards is a historic player who is not mentioned nearly enough when referencing Bengals’ legends, most of whom revolve around offensive players. The Bengals have had some awesome defensive players too and one of the best was Eddie Edwards.

Eddie Edwards was born in Sumter, South Carolina and raised in Fort Pierce, Florida. He played high school football at Fort Pierce Central High School. He attended the University of Miami, where he was a consensus All-American defensive end. In 1976, he was awarded the Jack Harding Memorial Award as the most valuable player for the Hurricanes, as selected by coaches’ vote.

A consensus All-American defensive end at the University of Miami, the Cincinnati Bengals used their third overall selection in the 1977 NFL draft to select the defensive end. Spending his entire career in a Bengals uniform, Edwards’ mark of 87.5 quarterback sacks (only 47.5 of which are “official” as the NFL did not consider sacks an official statistic until 1982) leads all Bengals players. Reggie Williams ranks second all-time on the Bengals’ all-time sack list and he still falls 21 sacks short of Edwards’ mark. Edwards also recovered 17 fumbles and was one of six players to play in both of franchise’s Super Bowls.

Antwan Odom posted five quarterback sacks against the Green Bay Packers in 2009 and yet, he simply tied Edwards’ franchise mark of 5 quarterback sacks in a single game. Edwards remembers that day “like it was yesterday” with the Bengals concluding their 1980 season and the Browns gearing up for the playoffs with quarterback Brian Sipe.

“To tell you the truth, I wanted to hurry up and play the game and get back to Florida; It was just too cold,” said Edwards, who grew up in Fort Pierce, Fla., and went to the University of Miami. “Sipe ran around a lot like Fran Tarkenton and everything I did that day worked. I did swim moves where I’d head butt (the tackle) and go over the guy’s shoulder or do a rip move and go underneath him. That day, everything our line coach (Dick Modzelewski) told me worked.”
Edwards’ final game came in Super Bowl XXIII where he “begged head coach Sam Wyche to dress him out in front of family and friends because he had a pretty good idea this was it.” Wyche dressed him and allowed him a couple of snaps.
Edwards was inducted into the University of Miami sports hall of fame in 1989. Unfortunately, a lot of young fans may not know the history of the Cincinnati Bengals and especially that of the defensive players. That’s a shame because the Bengals have had many great defensive players – Mike Reid, Tim Krumrie, Gary Burley and Ross Browner to name a few.
Eddie Edwards was a Bengals great whose accomplishments should be remembered and recognized.

The 10 Most Controversial Games in NFL Playoff History

Check out the top bonuses for this weekend’s NFL playoff games! 10) ...

As many may already know, the Cincinnati Bengals won a playoff game ...

Get your Free Bet now!
Latest News
When Will It Be Legal to Register with Online Sportsbooks and Betting Sites i...
From January 8th, 2022, at 9am, New Yorkers ...
Can I register an additional / new sportsbook account in New York while being...
The world of online gambling in the US ...
Is‌ ‌DraftKings‌ ‌sportsbook‌ ‌legal‌ ‌in‌ ‌New‌ ‌York‌ ‌city?‌
Great news for New York sports bettors, DraftKings ...
How can I open a sportsbook account as a resident in New York?
You have no doubt heard the exciting news ...
Is‌ ‌eSports‌ ‌betting‌ ‌legal‌ ‌in‌ ‌New‌ ‌York?‌
eSports has risen in popularity in recent years, ...
Betting Tips
Betting Tip: Phoenix Suns vs Golden State Warriors
Tip:
Over/Under
Odd:
1.29
Current Bonus:
100% up to $500