Everybody knows about Lambeau Field, but very few nowadays know anything about the man whose name it bears. Curly Lambeau founded, played and coached the Green Bay Packers starting in 1919, two years before the NFL came into existence. He shares this distinction with George Halas who founded the Bears that same year.

Lambeau started his football career as a star at Green Bay East High School where he was the captain of the team his senior year.  He was a good enough player to gain the attention of the legendary Knute Rockne at Notre Dame. He enrolled at Notre Dame in 1918 and made the varsity team as a freshman. A severe case of tonsillitis after his freshman year forced him to return home before his sophomore season.

Upon to returning to Green Bay, Lambeau went to work as a shipping clerk at the Indian Packing Company. While working there, Lambeau and his friend George Whitney Calhoun, founded the Green Bay Packers on August 11, 1919. They were originally named the Green Bay Indians after the packing company that they worked for after the company put up $500 for uniforms.  Shortly thereafter, the team’s naming rights were sold to the Acme Packing Company and they would forever be known as the Green Bay Packers.

Lambeau was the Head Coach of the Packers from 1919 to 1949.  During that time he ran the day to day operations of the team and had almost complete control of the entire organization. He started out as a player-coach, playing halfback in the old single wing offense as the primary runner and passer. In 77 games he threw 24 TD passes, rushed for 8 TDs and caught 3 TD passes. Lambeau was the first Packer ever to throw a pass, throw a TD pass, and convert a Field Goal. He won his only NFL Championship as a player-coach in 1929.

Lambeau’s 33 year career in the NFL as a Head Coach, 29 of which were with the Packers, was second only to George Halas.

But his players never once carried him off the field in celebration. For every player who believed in him, there was another who despised him for being insincere and untrustworthy.

Lambeau wasn’t necessarily a tyrant on the field, but he had strict rules and he let everybody know who was boss.

He would slap players with steep, unreasonable fines in an age when they made meager wages. He would threaten their jobs. He would place the blame for mistakes and defeats squarely on their shoulders.

“I remember I called him up once after we lost a ball game,” said Art Daley, a retired sportswriter who covered the Packers in the 1940s for the Green Bay Press-Gazette. “Andy Uram fumbled at the end. I think it was (against) the Bears. Curly said, ‘We didn’t lose the ballgame, Andy Uram did.’ ”

Of course, players who were more secure were more willing to stand up to him.

“I remember a deal once where (Mike) Michalske and (Cal) Hubbard backed him against the wall one time over some money or something,” Howie Levitas, a director emeritus on the Packers’ board who began his association with the team as a water boy in 1928, said in reference to two of the team’s Hall of Fame linemen.

“They literally backed him against the wall in the dressing room.”

More often than not, when players had a beef with Lambeau, it was over money. They’d complain to each other that he had deceived them in negotiations and even reneged on the terms of their contracts. But the times where Lambeau lost control were rare.

Early in his career, he was considered one of the pioneers of the forward pass. He also has been credited with being the first coach to hold daily practices and watch film. But many of his players openly questioned his knowledge of the game.

Some even suggested that it had passed him by at the end. A proponent of the Notre Dame box, Lambeau was one of the last coaches in the NFL to switch to the T-formation. He made the move in 1947 but had little success thereafter.

“When I got on his staff, I was surprised,” said Snyder. “We had very few meetings. It didn’t seem like he had any system. The plays to the left side weren’t the same as the plays to the right side. And I don’t remember looking at movies.”

What made Lambeau such a success was that he was a master salesman and motivator.

Before the college draft was introduced in 1936, he sold a long list of great players on the idea of coming to Green Bay. And once they arrived, he inspired them to great success with his competitive fire, his enthusiasm and his powers of persuasion.

“He could really get you worked up,” said Snyder.

Lambeau would stir players with his speeches. He’d grab their attention by storming the sidelines: ranting and raving, stomping his feet and kicking at air. Before sending them into a game, he’d grab them by the jersey, incessantly pound them on the back for encouragement and push them to play the game of their lives.

Wildung may have been in the minority.

“A lot of people didn’t,” said Johnston, “but I thought he was great.”

After he left the Packers at the end of the 1949 season, Lambeau would go on to coach the Chicago Cardinals 1950-51, then the Washington Redskins 1952-53. He had little success winning only 12 games in those 4 years.

As you see, the career and greatness of Curly Lambeau is not necessarily cut and dry as he was a very flawed human being but then who isn’t? There is little doubt that he was an integral part of why Professional Football has become one of the most popular sports in modern history.  The story of Curly Lambeau is a very fascinating one indeed and a lot more complex than I ever could have imagined. 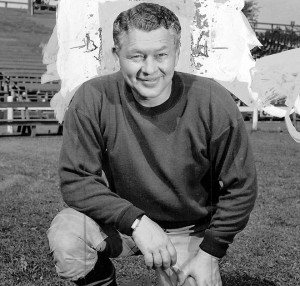 Get your Free Bet now!
Latest News
The Top-15 Players in Cincinnati Bengals History
I am limiting this list to retired players ...
What If Mike Tyson Fought in the 1960s and 70s: Part 1 of 3
For this mythical series, we will use our ...
St. John’s vs Seton Hall: The Pirates get an ugly win!
The Seton Hall Pirates came out of this ...
Should the Reds Remove Pete Rose’s Statue?
A few years ago the Philadelphia Phillies canceled ...
The All-Time Cincinnati Bengals Team
This will be the first in a series ...
Betting Tips
Betting Tip: Portland Trail Blazers vs Detroit Pistons
Tip:
Over/Under
Odd:
1.25
Current Bonus:
100% up to $500