Chuck Bednarik was the last of the 60-minute men, what do I mean when I say 60 minutes man? That’s simple he was the last player to start and play both ways!

Check out our sports betting guide to make your bets on the NFL draft and more!

After World War II, Bednarik attended the University of Pennsylvania where he excelled as a Center, Linebacker and occasionally a Punter. Bednarik was a three-time All-American, finished third in the Heisman Trophy voting in 1948 and was the winner of the Maxwell Award that year. After college, he was the first player selected in the 1949 NFL draft by the Philadelphia Eagles. The Eagles won the NFL Championship in his first year and then again in 1960 handing Vince Lombardi his only postseason defeat in his NFL head coaching career.

When I think of Bednarik, there are three things that stand out about him and his NFL career:  1. His tackle of Green Bay Packers great Jim Taylor at the 8-yard line in the 1960 NFL Championship game saved the game for the Eagles. 2.  The famous hit on New York Giants Hall of Famer Frank Gifford.  (That hit sidelined Gifford for 18 months!)  3.  Not only was Bednarik a two-way player, but he was also one of the best centers AND one of the greatest linebackers in NFL history. Even more amazingly, Bednarik played almost every down of every game and only missed a total of three games in his 14 years in the NFL. During his incredible career, he made the Pro Bowl 8 times, was First-Team All-Pro 5 times, a two-time NFL Champion, was on the NFL’s 1950s ALL-Decade team as well as the 50th and 75th Anniversary All-Time NFL teams, was elected to the Pro Football Hall of Fame in 1967 on his first year of eligibility and to the College Football Hall of Fame in 1969.

His nickname “Concrete Charlie” originated from his offseason job as a concrete salesman for the Warner Company in Philadelphia. After football, Bednarik served as an analyst in the inaugural season of “Inside the NFL” on HBO during the 1977-78 season. Check out our guide to the best new betting sites!

When you combine his service to his country and his accomplishments on the football field, I think it’s safe to say that the NFL will never see another Chuck Bednarik again.  RIP, Concrete Charlie.  You were a great one. 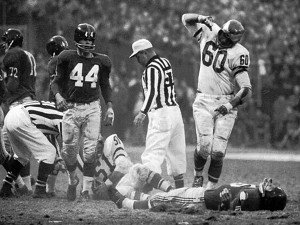 The Big Ten started using the name Big Ten in the early ...