Betting guide to the AFC Championship!

Everybody expected the Kansas City Chiefs to be playing this weekend, while very few expected the Cincinnati Bengals to be here. You can tell that in the odds for this game as the Chiefs are a big favorite at -7.5! Can the Bengals make it a game and cover the spread? Remember, just under a month ago; the Bengals beat the Chiefs 34-31 in Cincinnati in a game that saw the Bengals come from 14 points behind on three separate occasions; with that already being known, the point spread does look a little excessive, but these are the Chiefs we are talking about, and the Chiefs will be appearing in their fourth straight conference championship game. So we will look back at that first matchup and see what we can learn from that game a month ago.

Check out the top bonuses for this weekend’s games!

How the Bengals can win the game

Joe Burrow had all of the answers for the Chiefs’ Cover 2 and single-high man coverages in these teams first matchup — Kansas City’s best looks — in these two teams’ head-to-head matchup in Week 17 (a 34-31 win for Cincinnati). Even so, I don’t expect the Chiefs’ defensive game plan under coordinator Steve Spagnuolo to change that much. Cincinnati could we see more Cover 3 — maybe some quarters with pressure — I think this is what we will see more of as the Chiefs can’t just allow Chase to run wild on their defense again. I think we will see more cover three and quarters coverage, and I think the Chiefs will try to bring pressure. In the first meeting, Kansas City played 15 snaps of Cover 2 and 12 snaps of Cover 1 versus Burrow. The Bengals can work against that with deep corner routes and in-breakers for receiver Tee Higgins. But also look for three-level concepts, with receiver Ja’Marr Chase running the intermediate out-breakers from the slot. And when Burrow does read single-high coverage after the snap, he will identify and throw the 50/50 balls to Chase. The rookie wideout put on a show to win over the Chiefs, finishing with 266 receiving yards and three scores on 11 receptions. With all of that being said, Spagnuolo, at his core, wants to bring pressure with blitzes and cover three and quarters will allow them to blitz while not getting beat deep. If the Bengals hit the quick hot routes, they will have a genuine shot to win this game. The Chiefs are weak in the middle, and they did a great job at taking away Stefon Diggs, but that allowed Gabriel Davis to run loose in the middle of the field. Davis is good, but that same defense to take away Chase will allow Higgins and Boyd to run wild. The wildcard in all of this is Joe Mixon out of the backfield, and I am not just talking about running the ball as Mixon has been great in space catching the ball.

Attacking Mahomes on third down

In this week 17 game, the Bengals worked to situationally heat Mahomes, registering a blitz rate of 37.5% on third-down passing attempts. We have seen in the playoff wins over Las Vegas and Tennessee. Cincinnati can get overload fronts, second-and third-level blitzes and pressures from both zones and man coverage schemes. In that week 17 game, the key was to have the Chiefs in a third and five or more the Bengals would bring the blitz and in the second half of that game a month ago, it worked. Mahomes has developed into a rhythm passer throughout the second half of this season, and the Bengals will have to find a way to throw off that rhythm. The Bengals will probably rarely blitz in first and second down, but look for them to situationally Biltz on third down.

How the Chiefs can win this game

Get Kelce and Hill involved more

In the first matchup, the Bengals limited Kelce and Hill to 65 total yards and that cannot happen again if the Chiefs want a different outcome. The staples for the Bengals defense has been a mix of split-safety zone and Cover three from the Bengals’ defense, as it tries to stay on top of vertical routes. Staying on top of vertical routes will be huge for the Bengals as they cannot allow explosive plays. The primary key for stopping the Chiefs is to take away the vertical plays, and when the ball is caught, you have to make the tackle and not allow yards after the catch. This was key in the Bengals week 17 win. The Chiefs will be able to run the ball on the Bengals as they did in the second half of the first matchup. The issue with that is that the Chiefs are not playing at the pace they want to. So expect the Chiefs to use the quick passing game as their running game.

Melvin Ingram will be the key on defense.

The Chiefs are not great at rushing the passer with their front four, and the ability to bring Linebacker Melvin Ingram on situational blitzes will be tremendous. Kansas City can also stack Ingram off the ball as a rusher to attack the A-gaps, set him up with twists from edge alignments and work to get him one-on-ones to the backside of overload fronts. It would help if you made Burrow feel pressure with the defensive front and then sprinkle in the zero-man blitzes; you cannot allow Burrow to make an accurate pre-snap read, the Chiefs will have to mix it up as the ball is snapped in hopes of putting some doubt in Burrow’s mind.

I mentioned earlier how Mixon would play a significant role in the running game and, even more importantly, in the passing game. Mixon can be especially dangerous catching the ball out of the backfield, and I think if the Chiefs are bringing pressure, the Bengals could combat that by throwing to Mixon out of the backfield. Look for the Bengals to use more two-tight end sets, they made this adjustment in the second half of last week’s win over the Titans, and the Chiefs had issues with teams using two tight ends on them and running in the past.

Flowers will be tasked with defending Travis Kelce, the Chiefs big-play tight end. This will be a huge matchup when the Bengals go to Dime coverage. Flowers is long and athletic and did a great job against Kelce and Waller over the last month. Flowers needs to tackle Kelce as soon as he touches the ball and limit the YAC.

This is simple, for the Chiefs to win this game, these two need to both have big games. In the last matchup, the Bengals held these two well under 100 yards, combined! If that happens again, the Chiefs will lose this game. 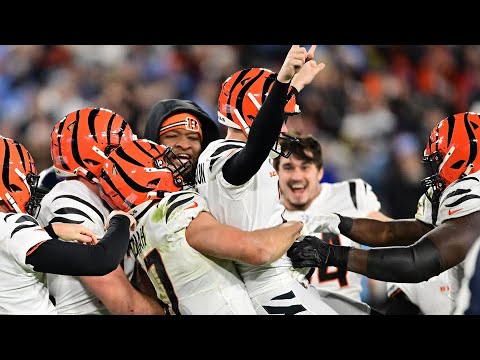 This was a great game a month ago, and the Bengals have gained more confidence since then. The defense has played well, and this team is playing with a swagger and enthusiasm that makes them a scary opponent for anybody. The Chefs are experienced, and they have been here before, but in the end, this is a game between two great offenses, and a shootout should happen here. 7.5 is an extensive line in a game like this, with everything riding on this game. This will be close until the end. Pick Bengals +7.5

Take Helaire and the over! I don’t expect that the Chiefs will run the ball a lot but Helaire rushing for 37 yards seems like a given to me. He won’t run much, but he will do well when he does run.

Take the over, Burrow is a gritty, tough athlete, and I expect a couple of decent runs in big situations. Take Burrow and the over!

Higgins asserted himself over the last half of the season, and when teams double-teamed Chase, Higgins went off. Gabriel Davis last week had over two hundred yards receiving as the Chiefs took away Stefon Diggs, and I look for a similar game plan this time around, and Higgins will go over the 70 yards needed to win this bet. Take Higgins and the over.

Get your Free Bet now!
Latest News
Top 10 Teams that Didn’t Win the Super Bowl
Today I want to talk about the 10 ...
Big Ten Basketball Power Rankings 1/30/23
Last week, the Gophers lost to Indiana at ...
One Takeaway from Conference Championship Weekend: The NFL gets what they wan...
Look here; we have the Eagles vs the ...
Our Latest YouTube Videos