Beau Allen, a veteran defensive tackler for the Philadelphia Eagles, gave a statement of retirement from professional football on Friday. Allen decided to resign after a seven-year career with three teams and scored the Super Bowl Championship in his birthplace, Minnesota.

In a Twitter post, he said, “I am retiring from the game of football.” According to Allen, being given the opportunity to play football in the NFL was the most incredible privilege of his life.

He also said that the people involved in his career make every game special. “It’s you all that I will miss most about the game,” he said, referring to the teams where he had built his career. 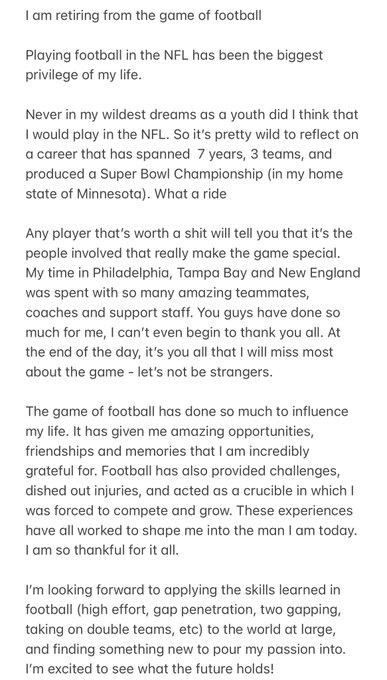 The 30-year-old player went to a high school in suburban Minneapolis. After graduating, Allen went to college in his hometown and chose the University of Wisconsin, which was his parents’ alma mater.

Furthermore, he was selected by the Eagles in the 2014 NFL Draft early in the seventh round and he carved out a brilliant career with the NFL. During his time as an Eagles player, Allen only missed one game.

Of all the games he participated in during his time with the Eagles, one of them was the Eagles’ Super Bowl LII, which he won over the New England Patriots. Throughout his career with the Eagles, Allen has scored 2.0 sacks, 87 tackles for loss, and 11 quarterback hits.

Being on the Buccaneers reserve and not playing for the Patriots

After completing his contract with the Eagles, Allen signed a deal as a free agent for the Tampa Bay Buccaneers. He stayed with the Buccaneers for two years with eight games early in the season.

In all his seasons at the Buccaneers, he played 27 games and was a substitute for Gerald McCoy and Vita Vea.

In 2020, Allen signed a contract as a free agent with the Patriots, but he never played for this team. His start to the season started with being placed on the injured bench and was re-appointed at the end of October.

When Allen began training again to prepare for his debut for the Patriots, he picked up an injury that ruled him out of the season. Subsequently, Allen terminated his contract with the team in March 2022 and spent only one year with the Patriots.

After uploading his decision to resign via Twitter, Allen received various reactions from his fans. They wrote their responses regarding the resignation through the comments column.

Someone with the username ‘tom stakes’ wrote, “Will always be one of those overlooked role players that was big on the SB team. Cheers to retirement Beau!”

Several other fans also wrote their thanks for Allen’s playing throughout his career. One of them wrote, “Thank you for 2017!”

In addition, ‘Birds’ congratulated Allen on his retirement and achievements as a defensive tackler. “Congratulations Beau! No Super Bowl without you brother!” wrote one Eagles fan.