Art Powell was a prototype for the pro game’s big wide receivers. At 6 feet 3 and 210 pounds or so, he had good speed and sure hands, and he provided the type of exciting offense that buoyed the A.F.L.’s challenge to the long-established National Football League. he would also be the first of the prototypical Raiders receivers. Great at separating and possessing 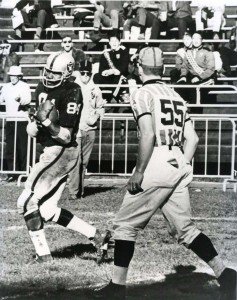 great straight line speed, he was the perfect receiver for the Al Davis system.  Art Powell was one of the American Football League’s first  true stars. With the New York Titans, Powell led the AFL in receiving touchdowns in 1960 and in receiving yards in 1962. He then led the league in both categories in 1963 after moving to the Raiders.

Powell began his professional career after he was drafted by the Philadelphia Eagles and put together an impressive rookie season in 1959, finishing second in kickoff returns with a 27-yard average while serving as a reserve defensive back. Included in those returns was a 95-yard touchdown run against the New York Giants on October 4 that jolted the defending conference champions in a 49-21 defeat.

After being released Powell cast his lot with the AFL’s Titans in 1960, and was soon establishing his receiving credentials after a position change by Titans’ legendary head coach Sammy Baugh, scoring four touchdowns in his first contest. During the league’s first three seasons, Powell teamed with another great receiver Don Maynard to form the first wide receiver tandem ever to each gain over 1,000 receiving yards on receptions. In fact, the duo accomplished that feat in 1960, the first year of the AFL’s existence. They repeated that feat again in 1962.

Despite his status as the team’s leading receiver, Powell was preparing to leave for another team following the conclusion of the 1962 season due to the Titans’ continuing financial troubles. In order to obtain something for him, while also alleviating the team’s finances, Titan owner Harry Wismer offered him for sale on October to the highest bidder on October 19, 1962.

Oakland would be Powell’s eventual destination, signing with the team on January 31, 1963. During his first year with the Raiders in 1963, the team’s record improved by nine games under the leadership of new head coach Al Davis, with Powell scoring 16 touchdowns and catching 73 passes for 1,394 yards.

Black players’ anger over discrimination gained national attention in January 1965 when black All-Stars, upon arriving in New Orleans the weekend before the A.F.L.’s East-West Game, were refused service by white cab drivers and at night spots in the city’s Latin Quarter. Powell and four other players representing their black teammates sought but failed to receive equal treatment, prompting the 21 black players from the two squads to announce that they would boycott the All-Star game. They agreed to play when the league shifted the game to Houston.

Four decades after his playing career ended, Powell remains the Raiders seventh all-time leading receiver, scoring 50 touchdowns during his four seasons with Oakland. With five seasons of over 1,000 receiving yards, he earned American Football League All-Star accolades for four straight years and was among a select group that was chosen on the All-Time All-AFL Team. The latter balloting took place in 1970 following the merger between the AFL and NFL, and was selected by Hall of Fame selectors and wire services. Despite catching only 479 career passes, Powell pulled in 81 for touchdowns and he still ranks 18th all-time in career touchdown receptions, and his career touchdown rate of 16.9% (that is, the percentage of his catches that went for touchdowns) is amongst the best in history.

A statistical comparison between hall of fame receiver Powell and Fred Biletnikoff, shows how great a player Powell was.

Led league in receptions in 1971

Award for Best College Receiver is named after him

I am not claiming that Art Powell was a hall of famer, I am just claiming he belongs in the conversation, But, when you look at Lynn Swann’s stats compared to Powell their really is no comparison, Powell wins it every time.