Five years ago today, the Miami Dolphins used a blocked punt for a safety in the final minute to defeat the Minnesota Vikings

In the modern NFL, it’s not uncommon for the winning score to come in the final minute. Usually however, those come either by way of touchdown or field goal.

On this day five years ago, it was a safety that propelled the Miami Dolphins past the Minnesota Vikings. Defensive end Terrence Fede blocked a punt from Minnesota’s Jeff Locke out the back of the end zone in the final minute to give the Dolphins a 37-35 victory.

For three quarters at Sun Life Stadium on Dec. 21, 2014, it was the defenses that stood tall as the Vikings held a 17-14 lead entering the final quarter. The fourth quarter would see the teams combine for 41 total points.

The first lead for the Dolphins came on the first play of the fourth quarter on a 1-yard touchdown run by Lamar Miller. After a Blair Walsh field goal for Minnesota cut the Miami lead to one, the combination of quarterback Ryan Tannehill and wide receiver Mike Wallace hooked up for a second touchdown connection — this one for seven yards after a 16-yard hook-up in the third quarter.

Down eight with 6:39 to play, it took the Vikings less than two minutes to answer and just 11 seconds after that to regain the lead.

With less than five minutes to play, Vikings’ quarterback and Miami native Teddy Bridgewater connected with Jarius Wright for an 8-yard touchdown, which was followed by a game-tying 2-point conversion run by Matt Asiata. Asiata put Minnesota back in front on the next play from scrimmage with a 5-yard touchdown run after Miami’s Jarvis Landry fumbled the ensuing kickoff.

Minnesota led 35-28 with 4:36 left, but Tannehill proceeded to go 10-for-11 on the ensuing Miami drive, which was aided by a pass interference penalty on 3rd-and-14. With 1:11 to go, Tannehill’s fourth touchdown pass of the day — a 3-yard scoring strike to Damien Williams — tied the game at 35.

With the contest knotted, it looked like overtime was a best-case scenario for the Dolphins and a worst-case scenario for the Vikings, but that would not be the case. After allowing three straight scoring drives to start the quarter, the Miami defense forced a 3-and-out, thanks to a third down sack from defensive end Cameron Wake.

Facing 4th-and-12 from his own 11-yard-line, Locke went back to punt. He caught the low snap near his own goal line as Fede made penetration. Fede was able to get one hand on the punt as the ball sailed out the back of the end zone for the go-ahead safety with 41 seconds remaining. The Vikings were unable to recover the free kick and Miami ultimately prevailed. 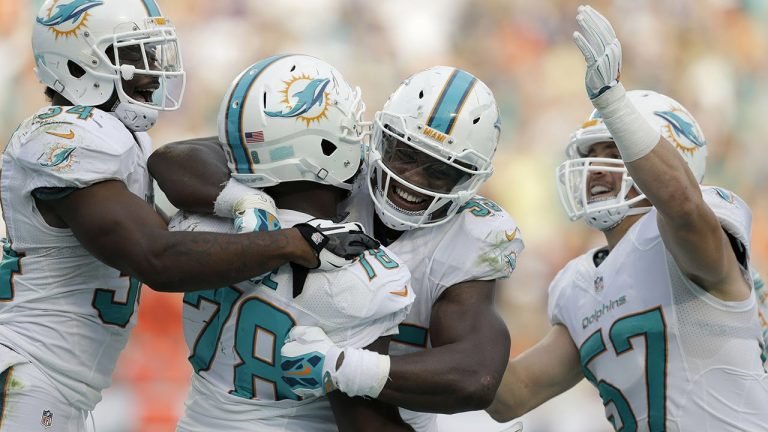 Tannehill passed for 396 yards in the victory as Miami rallied from an early 14-0 hole. Miller led all rushers with 92 yards on 19 carries. Miami tight end Charles Clay finished with a game-high 110 yards receiving.

Asiata finished with 58 yards rushing and two touchdowns for the Vikings in the loss. Bridgewater passed for 259 yards and a pair of touchdowns. Minnesota safety Harrison Smith and Miami defensive end Derrick Shelby each recorded interceptions.

With the win, Miami improved to 8-7 while the Vikings fell to 6-9. The Dolphins failed to complete their first winning season in six years as they fell at home to the New York Jets the following week. The final victory of 2014 however, ended in bizarre fashion and on this day a half-decade ago.