Throughout the course of his illustrious 17-year NFL career, Dan Marino had few doubters. Perhaps one of the only occasions came on this day 25 years ago as Marino led the Miami Dolphins into a Week 1 home contest against the New England Patriots.

Marino’s 1993 season had ended prematurely with an injury to his Achilles tendon, suffered in an October victory over the Cleveland Browns. The Dolphins started 9-2 in 1993, but lost their final five games and missed the playoffs. New England, in overtime, was the team that handed them the final defeat.

On Sept. 4, 1994 as Marino made his return from injury, there were questions whether or not he would ever be the same. New England looked like it would supplant Miami as the biggest challenge to the Buffalo Bills in the AFC East. When the day was over, Marino had passed for 473 yards and five touchdowns in a thrilling 39-35 Miami victory.

Trailing 7-0 early in the second quarter, Marino would deliver his first touchdown strike since his return from injury with a 64-yard pass to Mark Ingram. From there, the Patriots would steal momentum and take a 14-10 lead into the locker room before extending that lead to 21-10 early in the third quarter.

After that, Marino and New England quarterback Drew Bledsoe would trade touchdown passes. Sandwiched around a Bledsoe touchdown pass to Michael Timpson, Marino found tight end Keith Jackson for a 26-yard score and Irving Fryar for a 54-yard touchdown. The Patriots led 28-25 after three quarters, but Marino and Fryar were just getting started.

Fryar had spent the first nine years of his NFL career with the Patriots, making the Pro Bowl in 1985. It would be Fryar who would give Miami its first lead when Marino found him deep again — this time from 50 yards out.

Trailing 32-28, Bledsoe and the Patriots would not go quietly as the second-year quarterback from Washington State found Ray Crittenden for a 23-yard touchdown early in the fourth quarter. The teams would trade stops when the Dolphins got the ball back at their own 20-yard-line with less than seven minutes to go in the game.

The decisive possession started with a 9-yard sack — one of two on the drive — of Marino, but the Miami gunslinger was able to keep the drive alive with third down conversion throws to Terry Kirby and Scott Miller. With 3:25 to go in the contest, the Dolphins faced a critical 4th-and-5. There seemed to be no doubt where Marino would go with the football.

With the game hanging in the balance, Marino found Fryar down the sidelines for a 35-yard touchdown pass to put Miami ahead once again, 39-35. Bledsoe would move the Patriots into Miami territory on the ensuing drive, but safety Gene Atkins stripped tight end Ben Coates of the ball and Miami recovered. New England would get once last shot, but the Dolphins forced a turnover on downs to seal the improbable victory. 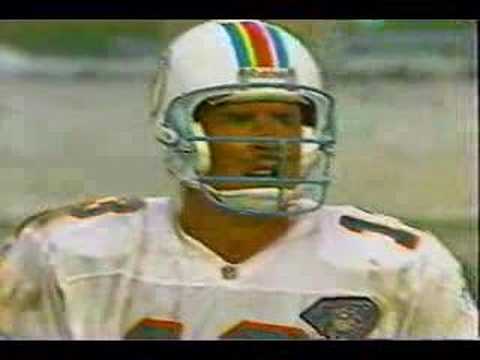 Marino vs The Patriots – 94 Season Opener

Bledsoe would pass for 421 yards and four touchdowns for New England in the loss, but Marino would not be outdone on that September day at Joe Robbie Stadium. Against his former team, Fryar finished with 211 yards receiving on five catches to go with the three scores. Atkins added an interception to go with his clutch forced fumble. Troy Vincent also recorded an interception in the victory.

The win would prove to be a pivotal one as the Dolphins and Patriots both finished the year tied atop the AFC East at 10-6. Miami’s two victories over New England that year would be the difference as it claimed the AFC title.

Perhaps more importantly, it left no doubt that Marino still had plenty left in his aging tank. Marino would pass for 4,453 yards and 30 touchdowns that season while being named to the Pro Bowl. Perhaps the most memorable moment was the Week 1 showdown against Bledsoe and the Patriots. It happened on this day a quarter-century ago.