The 10 Most Controversial Games in NFL Playoff History

Check out the top bonuses for this weekend’s NFL playoff games!

This is the game that started people screaming for instant replay; now this game would rank higher on the list, but with as great as the Steelers were I don’t think you can flat out say the Oilers would have one if they got the call. The play came in the third quarter of the 1979 AFC Title Game between the Houston Oilers and the Pittsburgh Steelers. Oilers receiver Mike Renfro made an amazing catch in the back of the end zone in the third quarter, but it was ruled that he did not get both feet in bounds (even though the replay showed he clearly had). Instead of a game-tying score, the Oilers continued to trail and ended up losing the game 27-13.

The Giants were up by a seemingly safe 38-14 late in the third quarter, but a late rally by San Francisco brought it back. When the 49ers scored a touchdown with one minute remaining to take a 39-38 lead, it seemed little there was no hope for the Giants. However, Kerry Collins led his team down the field and put it into field-goal position to win the game.The snap was botched by veteran long-snapper Trey Junkin, and holder Matt Allen picked up the ball and heaved it downfield towards offensive guard Rich Seubert. Seubert was tackled on the play, which should have resulted in a pass interference call. However, the refs considered Seubert an ineligible receiver and called the incomplete pass the last play of the game. The Refs were wrong, and the game was given to the 49ers.

In this crazy Wild Card game, the Buffalo Bills were leading the Tennessee Titans 16-15 with only 16 seconds remaining in the game. What happened on the ensuing kickoff seems more likely to be the end of some unbelievable football movie. Tight end Frank Wycheck received the kickoff, ran to one side of the field and chucked a pass across the field to Kevin Dyson, who returned it for a 75-yard touchdown.

Where the controversy comes in is that many(myself included) thought Wycheck’s pass was a forward pass and should have been ruled illegal. Watch the reply and decide for yourself whether the pass was legal or not.

This game always seems to get forgotten by Raiders fans when they are bitching about the “Tuck game.” The Patriots had blown the Raiders out in New England, and it would be the only blemish on the 1976 Raiders record as they would finish 13-1. The 1976 AFC Divisional Playoff matchup between the Raiders and the New England Patriots was tainted by a controversial roughing the passer call on the Pats Ray “Sugar Bear” Hamilton gave the Raiders new life down 21-17 late in the fourth quarter. Raiders quarterback Ken Stabler took the second opportunity and capitalized, running the ball into the end zone himself to give Oakland the 24-21 victory.

This game is known as the “Catch 2”, and it should never have happened. Jerry Rice probably the greatest WR in history hardly ever made a mistake in his career, but he did in this game. Now he did, in fact, catch a pass – it’s what he did after catching it that sparked the controversy in this matchup. Rice was ruled down near the end of the 1999 NFC Wild-Card game between the Niners and Packers, but replay showed that Rice had in fact fumbled and the ball should have belonged to Green Bay. Instead, the 49ers retained possession and the game ended with Steve Young throwing a game-winning touchdown to Terrell Owens with the final seconds ticking off the clock. The most amazing part of this whole scenario is the fact that it was Rice’s only catch of the game.

One of the several incidents that scarred Raiders fans for life during the 1970s was the Rob Lytle fumble incident – Lytle, a running back for the Broncos, immediately muffed a handoff during the third quarter of the 1977 AFC Championship Game, with the Broncos up 7-3. The ball came out as soon as Lytle was hit, but the referee ruled that his motion had already been stopped (by the officials). The Broncos kept the ball, scored on the very next play, and won the game 20-17. Much like the Rice play at number 5, this was not controversial; it was just a blown call. 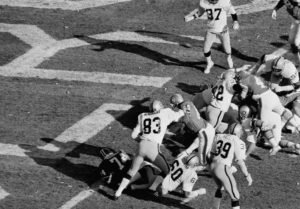 The Raiders were up by three with less than two minutes to spare. Tom Brady was looking to lead the Patriots down the field to at least attempt a field goal. Brady dropped back to pass, and Charles Woodson came on a corner blitz and got to Brady as he was about to throw. Brady dropped the ball, and the Raiders recovered. Game over, right?

The rest is history. The infamous “Tuck Rule” was implemented, the Patriots drove down the field, Adam Vinatieri kicked the game-tying field goal in a blizzard, and New England went on to win the game and eventually the Super Bowl.

Franco Harris’ “Immaculate Reception” is perhaps the single most famous play in the storied history of the Pittsburgh Steelers, but was it a legal play? No one knows, except the players that were directly involved and they might not even know! The issue at hand is whether or not the ball hit another Steeler before Harris caught it. Back then, a ball that hit a receiver (and was not caught) could not be caught in mid-air by a second receiver from the same team. The camera issue comes into play yet again, as there are few angles of the catch and none that show what the ball hit off of before Harris caught it.

For conspiracy theorists who claim the NFL is fixed, this is the game to look at.This game is not remembered for one particularly bad call that changed the outcome of the game either way – it was a collection of calls that make Seahawks fans rue the mention of Super Bowl XL.

The referee who worked that Super Bowl, Bill Leavy, seemingly could no longer live with the guilt of that game and four years later proclaimed to the Seattle media that his officiating crew muffed several calls on that fateful night in Detroit.

Some of the calls that were blown included a questionable holding call while the Seahawks were on the verge of scoring, and a low block called against then Seattle QB Matt Hasselbeck for a low block (even though he was actually trying to make a tackle during an interception return), not to mention a few other phantom calls that included a shady pass interference call on Seahawks receiver Darrell Jackson.

Overall, it was a debacle – a pain that will never be alleviated for the Seahawks players who in all probability had a Super Bowl ring stolen from them that day.

This was the most egregiously bad call of all-time. The Colts were a team that had lost not one quarterback but, both Quarterbacks. First, it was the legendary John Unitas because of a leg injury; then backup Gary Cuozzo with a shoulder separation. It meant that coach Don Shula had to find some replacement. He realized Tom Matte, a spirited halfback, had once played QB at Ohio State running the old split-T formation, which was not an exactly NFL offense, even back then.

Tom Matte, with only three days to practice for the role and wearing a wristband with a ready list of plays attached, Matte gave a remarkable performance against the Los Angeles Rams to clinch a tie for the Colts with the Packers, and force the one game playoff.

Now, a week later, it’s in Green Bay, still with Matte quarterbacking, and the Colts are leading 10-7 with less than two minutes on the clock. Chandler lines up to kick from the 22-yard line, attempting to gain a tie and force overtime. Chandler swung his right leg. The ball was high — and slicing.

Underneath the goal post, Referee Jim Tunney raised his arms. It was 10-10. But Colts Lou Michaels and Fred Miller, on the field-goal defending unit, were going crazy. They led the argument, screaming the kick had gone wide of the 10-foot-high upright. But it also was above the top of the post, meaning Tunney had to imagine if the ball was good, he imagined and unfortunately for the Colts he imagined wrong.

Chandler, dropped his head as if he had missed because he had! The NFL faced such backlash from the game that they ended up extending the uprights, but in the end, there is no doubt that this Lombardi Championship was severely tainted. Don Chandler to his credit admitted years later that he did indeed miss the kick.