The Grueling Truth - Where Legends Speak / Where Do Dirk and Wade Rank Among the All-Time Greats?

Where Do Dirk and Wade Rank Among the All-Time Greats?

Their place in history

Dirk Nowitzki and Dwyane Wade have officially retired from the NBA. Both players will inevitably be first-ballot Hall of Famers and both defined the franchises they played for during their careers. Dirk defined Dallas just as much as Wade defined Miami, and you could really tell that if you watched how fans, celebrities, and fellow players paid homage to them over the last week.

Before getting into all-time ranks, I wanted to just run through both players’ personal accolades. Dirk was drafted with the ninth overall pick in the 1998 draft and played in the NBA for 21 seasons, all with the Dallas Mavericks. During that time, he won two Western Conference Championships and one NBA Championship. He was the MVP of that finals series. Dirk won the 2006-07 league MVP, went to 14 All-Star games, and made 12 All-NBA teams including four All-NBA First Teams, five Second Teams, and three Third Teams. His 31,560 career points are the sixth most all-time, his 1,522 games played are third, his 51,368 minutes are third, his 1,982 made threes are eleventh, and his 11,489 rebounds are twenty-seventh. No power forward or center has more made three-point shots than Nowitzki and he is the second greatest international player in league history, only behind Hakeem Olajuwon. In his final home game, he became the oldest player to score 30 points in a game, surpassing Michael Jordan.

Then there’s D-Wade. He was drafted fifth overall by the Miami Heat in the 2003 draft. Wade spent 14 and a half years of his career with the Heat. During that time, he won five Eastern Conference Championships and three NBA Championships. He was the 2005-06 Finals MVP, the 2009-10 All-Star MVP, and the 2008-09 scoring champion. He went to 13 All-Star games and earned many All-League honors, including 2003-04 All-Rookie First Team, two All-NBA First Team selections, three All-NBA Second Team selections, three All-NBA Third Team selections, and three All-Defensive Second Team selections. His 23,165 career points are the twenty-ninth most in NBA history. Wade scored 30 points in his final home game and recorded a triple-double in the last game of his career. 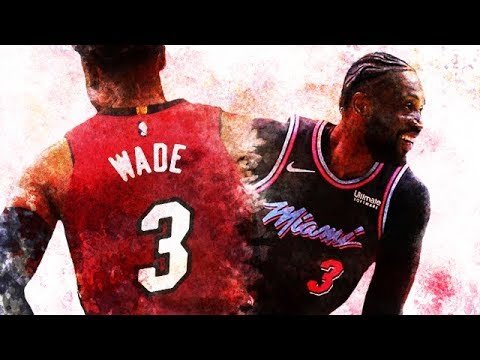 Thank you for sticking around if you got through all of that, I know it’s a lot, but it wouldn’t feel right to not give those two greats the credit they deserve. Those accolades will also help us frame Dirk and Wade when compared to other all-time greats. Now, it’s time to get into the fun stuff.

As far as all-time rankings go, both players are in the top five for their respective positions. Nowitzki’s greatest competition includes Charles Barkley, Tim Duncan, Kevin Garnett, and Karl Malone. Let’s make this easy, Nowitzki is the third best player of the five. Only Duncan, who is arguably a top ten player all-time, and Malone stand above him. Duncan was the centerpiece of one of the greatest dynasties in NBA history. He won two MVPs, five NBA Championships, was named to 31 All-League teams, and finished top ten in career rebounds and blocks. Malone won two MVPs, is second all-time in points, eighth in rebounds, and eleventh in steals. It is an incredible testament to Nowitzki’s work ethic and ability to be the third-best power forward in the game’s history.

Wade is also in rare air. The four best shooting guards of all-time, besides Wade, include Kobe Bryant, Clyde Drexler, Jordan, and Jerry West. James Harden seems like he’s trending toward the top five, but he’s not there just yet. This is a tougher decision to make. Jordan is obviously the best shooting guard because he’s the best player of all-time, and Kobe is number two because he’s a top ten player. It really comes down to who third is. Wade or West? Like Wade, West has a scoring title, an All-Star MVP, and a Finals MVP. He only won one Championship, but he scored more points than Wade in just 14 seasons, in an era where there wasn’t a three-point line. He also has ten All-NBA First Team selections along with four All-Defensive First Team selections. To me, West is the third best shooting guard in history, but Wade is a close fourth and the gap between him and fifth is immense. Realistically, only a continued surge by Harden could ever push Wade back to fifth. Now for the grand finale; where do Nowitzki and Wade rank among all of the players in league history? Nowitzki easily cracks the top 20 and is probably somewhere around the 15-18 range. Wade is a little farther back and is in more of the 20-24 range. He would be even higher, but he’ll go down as one of the greatest players to never win a league MVP, which would have really propelled him higher up the list. As for Nowitzki, he runs into a long jam of multi-time MVPs and players who sit on the edge of the top ten. While Nowitzki won a Championship, MVP, and is sixth in scoring, there’s still another, even more dominant, class of players above him.

I have to say, as a Heat fan it’s going to be really strange not seeing Wade on the court next season, and I imagine Mavericks fans feel the same way. It was quite a run for Nowitzki and Wade, two of the best men to ever play the game.