This was a matchup of number one Penn State and number two Alabama. Penn State was trying to win Joe Paterno his first National Championship. Instead, the Nittany Lions had it snatched away from them by Bear Bryant and his Crimson Tide with an unforgettable last-minute goal-line stand that still ranks as one of the greatest in college football history today. 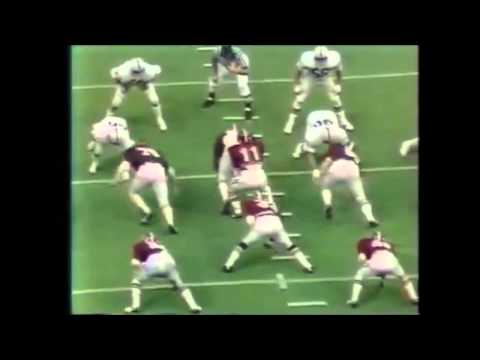 This game found these legendary coaches, Tom Osborne and Bobby Bowden, looking for their first National Championships. The Cornhuskers ranked behind Florida State at #2 and an underdog by as many as 17 points. After kicking a field goal to give them a slim 16-15 lead with 1:18 left, the Huskers relied on their defense to close the deal for them, only to see the Seminoles rally, aided by a kickoff out of bounds, to the lead with 21 seconds left, hanging on when Nebraska, aided by penalties on the Seminoles, would miss a field goal as time expired. This also makes this game the height of irony and gives them their first national title. 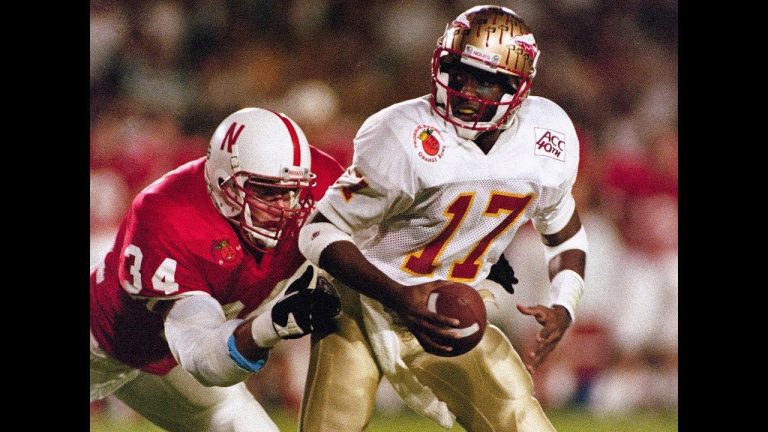 This game was Vince Young’s coming-out party. Want even more reasons why this was historical besides Texas’ first trip to the Granddaddy? It was the only meeting between these two schools on the football field. The Wolverines took a 31-21 lead into the game’s final quarter and, led by the game’s defensive MVP LaMarr Woodley, had done an excellent job of bottling up Young and his teammates until a 17-point fourth-quarter explosion of points by Texas. UT’s kicker Dusty Mangum hit a field goal as time expired to win it after Young had moved them into position. 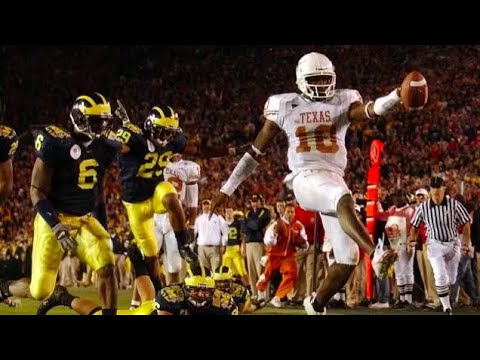 Notre Dame scored the first 12 points of the day on this bitter cold New Year’s Day in Dallas but still trailed Houston 20-12 at the end of the first half and was without Montana, who was reportedly being treated for chills and a fever caused by the cold conditions, he returned miraculously in the fourth quarter to lead Notre Dame back from a 34-12 deficit to a 35-34 win, throwing a tying touchdown on the game’s last play, with the Irish winning it with an extra point after the game clock had already expired, leaving the Cougars as the ones feeling a little sick after witnessing an early edition of “Montana Magic” up close and personal. The game would go down as the “Chicken Soup game.”

This game burst Lavell Edwards and BYU onto the national stage. The fact that they took down Craig James, Eric Dickerson, and the mighty Pony Express in this one, while at the same time being quarterbacked by Jim McMahon, gives this game plenty of star power, and it was the start of the Holiday Bowl’s reputation for putting on great games. BYU would enter the fourth quarter trailing SMU, 38-13, only to score 27 4th quarter points, 21 of those in the final 2:33, to nip the Mustangs on a hail mary touchdown pass from McMahon with no time on the clock, the extra point giving them the win behind McMahon’s 433 yards and MVP performance in a game that is still one of the best of all time after more than 30 years. 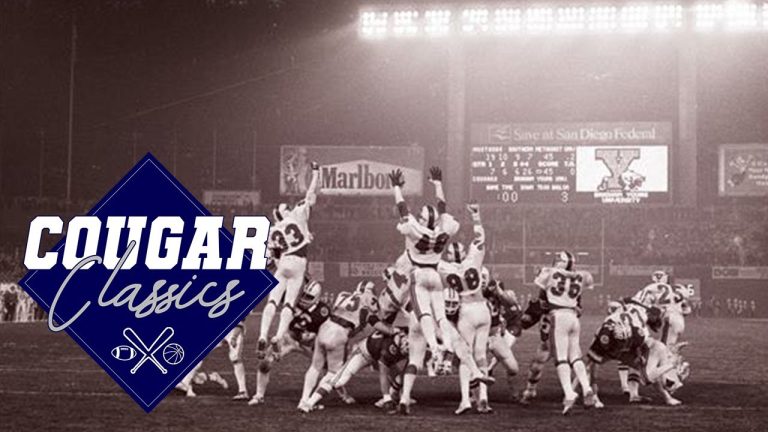 The series of fantastic events that made this game one of the greatest ever played began when the heavily-favored Sooners, who had been well behind the upstart Broncos all night, scored 25 unanswered points to take a 35-28 lead in the fourth quarter, the last points coming on a pick-six off of Jared Zabransky, only to see Boise get it to OT on a fantastic hook & lateral play to tie the game. And then, of course, we were just getting started. This game had everything from the OU score on the first play of overtime to Boise scoring and then winning on the “Statue of Liberty” two-point play. Did I mention the storybook ending where the game’s hero proposes to his cheerleader girlfriend on the 50-yard line after the game? College football has never seen a better Cinderella story, at least not in the last 50 years. 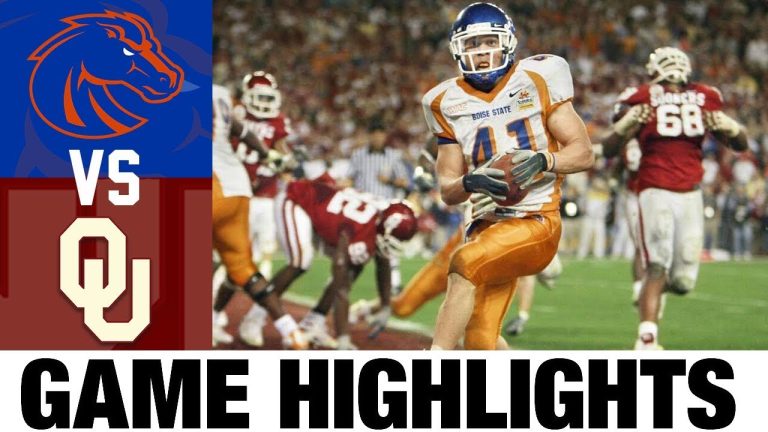 The game itself lived up to the hype of the “good guy” Penn Staters, led by Joe Paterno, and the thuggish “U,” directed by Jimmy Johnson, was the icing on the cake here. Revisionist history may lean towards Penn State being the actual bad guys when all the truth came out. Penn State’s physical, hard-nosed defense harassed Miami all day, particularly Heisman Trophy-winning quarterback Vinny Testaverde, who threw five interceptions, including one in the red zone with 18 seconds left to seal the upset for Penn State and give Paterno a national championship. Probably the biggest upset in the history of College Football National Championship games. 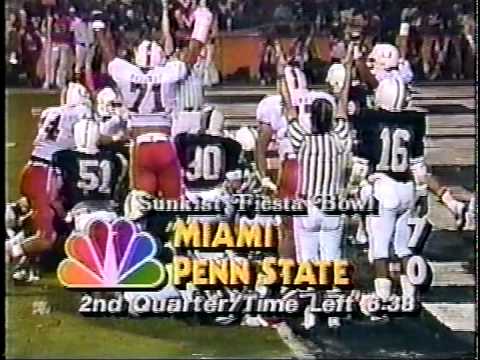 The Canes were your favorites, and the Buckeyes were able to stay with them all night, and leading Miami, 17-14 as the fourth quarter began. Miami’s tying field goal was the only score of the fourth. After the teams traded scores in the first overtime period, the Buckeyes would win in the second OT after being aided by a late, and many will say bogus, pass interference flag to score the upset. This is no doubt the most controversial ending to a bowl game ever. 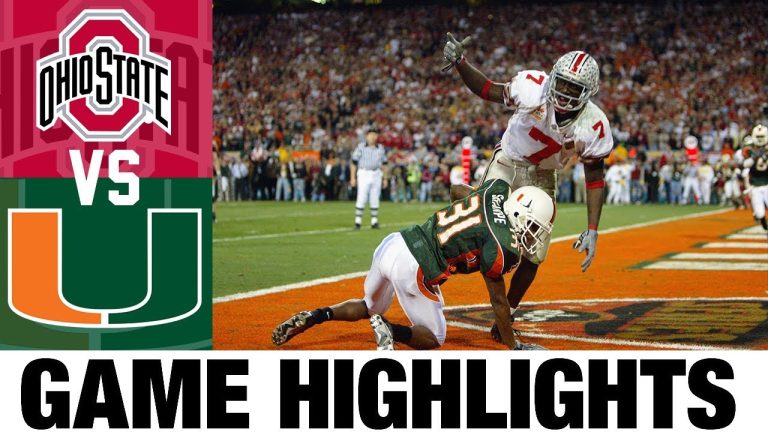 From Vince Young to Reggie Bush to Matt Leinart, this game had all the star power you could ever want in a title game and ended with Young leading Texas on a drive for the ages to take down USC and win Mack Brown his only national title, and was also the 800th win for the Texas program. Yup. This one had it all. 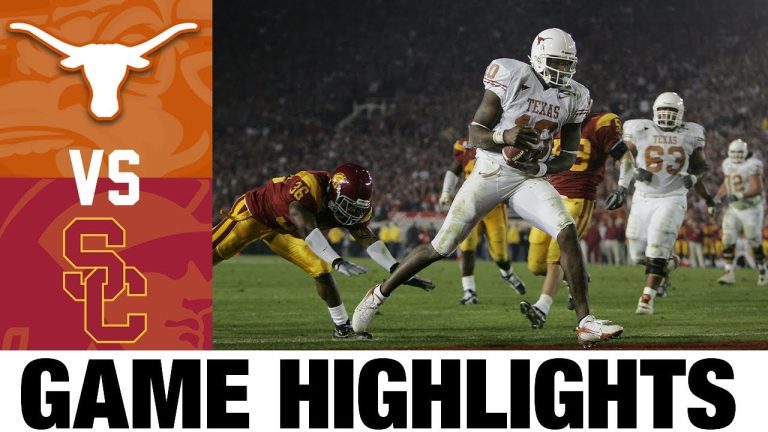 Tom Osborne’s Nebraska team came in ranked #1, and Miami at #5, but when faced with a decision at the end of the game whether or not to play for a tie and leave it in the voters’ hands. Osborne decided he was going to go for two and the win. That decision resulted in quarterback Turner Gill’s pass being knocked to the Orange Bowl grass and Miami stealing a national title away from the heavily favored Cornhuskers, thanks to the #3 and #4 ranked teams losing earlier bowl games to give the Hurricanes a shot. This was the start of a great dynasty by the Hurricanes and gained Tom Osborne more respect than winning a thousand games in defeat. This game saw the Huskers fall behind early 17-0 only to come back and tie the game. Osborne even broke out the old fumblerooski. 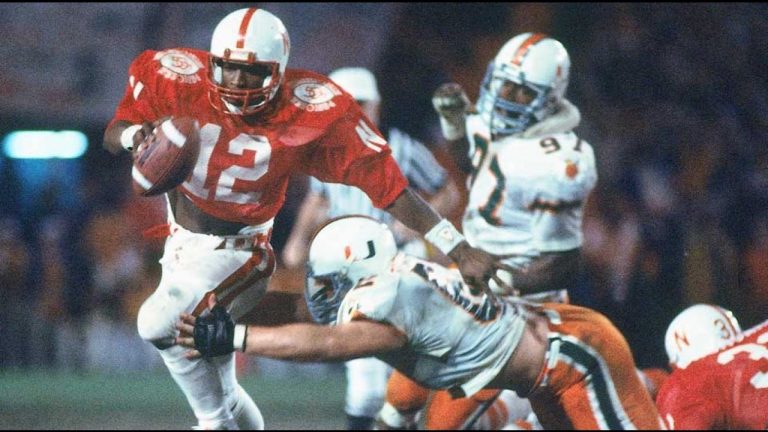 The Gators outscored opponents 612-228. After the Gators pulled off a victory ...