Corey Davis finished last year with 89 receptions for 1,429 yards and 12 touchdowns, good for 5th overall in the NCAA in 2015. By pairing with Daniel Braverman (108 catches for 1,367 yards and 13 touchdowns), Davis proved to be a threat and hopes to capitalize on that this season for a bigger season for the Broncos. Braverman left school early last season for the NFL, getting selected in the 7th round by the Chicago Bears. Davis hopes to go above and beyond that and with a strong 2016 season, he can do that, coming in as our second best receiver on the list. Richie James is probably the most talented player you’ve never heard of. He was 3rd in Conference USA in receiving yards with 1,334 receiving yards on 107 receptions and caught 8 touchdown passes as a freshman last season. James also rushed 13 times for 158 yards and 1 touchdown on the season as well. He was named a USA Today Freshman All-American, broke the MTSU record for most receptions in a single season with 100. Among other records broken, James broke the receptions per game (8.3), receiving yards (1,220), and receiving yards per game (101.7). If you don’t know his name now, you will by the end of the 2016 season. Isaiah Ford has been all about making history so far at Virginia Tech. In just his sophomore season, Ford became the first player in Virginia Tech history to record 1,000 yards receiving in a single season. Ford finished 2015 with 75 receptions, 1,164 receiving yards, and 11 touchdowns, all career highs for Ford. With his speed and ability to find open seams, Ford has proven to be a huge weapon with tight-end Bucky Hodges on the field as well. With the installation of Justin Fuente’s new pass heavy offense, we could see greater production and more historical performances from Ford in the very near future.

James Washington hauled in 53 receptions for 1,087 yards and 10 touchdowns in 2015 for an Oklahoma State team that returns a majority of their offense. With Corey Coleman (Baylor), Josh Doctson (TCU), and Jakeem Grant (Texas Tech) all moving on to the NFL, this season could be the year for Washington to earn some of his own shine as he enters his junior season.

As a true freshman, Calvin Ridley was superb in 2015, recording 89 receptions, 1,045 receiving yards and 7 touchdowns. Ridley has a coming out party of sorts in last year’s College Football Playoff Semifinal against Michigan State, recording 8 grabs for 138 yards and 2 touchdowns, turning what was a close game, quickly into a laugher. Ridley was 1st in the SEC in receptions and 2nd in receiving yards last season before earning Freshman All-American as well so he’s definitely made a name for himself early, look for him to climb this list.

Another freshman who took the SEC by storm last season, but this one is a punt return specialist as well. Kirk averaged 24.4 punt return yards per punt last season en route to 2 touchdown returns for A&M last season. Kirk also posted 80 receptions, 1,009 receiving yards, and 7 touchdowns on offense for the Aggies as well. Kirk is pure speed and elusiveness, let him get in the open field and you just may have a difficult time catching him.

Chris Godwin became just the 3rd player in Penn State history to eclipse 1,000 receiving yards in a single season in 2015. On the season, Godwin had 69 receptions for 1,101 yards and 5 touchdowns. Godwin had 5 100-yard receiving games in 2015 before earning 2nd team All Big Ten and being named to the Biletnikoff Award Watch List. Penn State will look to Godwin to become a bigger threat this upcoming season as he’s known for his spectacular catching ability. KD Cannon was 2nd on the team in receiving yards last season with 868 yards behind 50 receptions and 6 touchdowns. Cannon enters this season ranked 3rd all time on Baylor’s career yards per game with 76 receiving yards per game. Cannon was named to All Big Ten Second Team last season for his efforts, next to former teammate Corey Coleman, who was drafted in April by the Cleveland Browns. Coleman tallied 20 touchdowns for the Baylor WR corps last season, a number that could be reserved for Cannon this upcoming season, pending a breakout year. He rounds out our top 10. 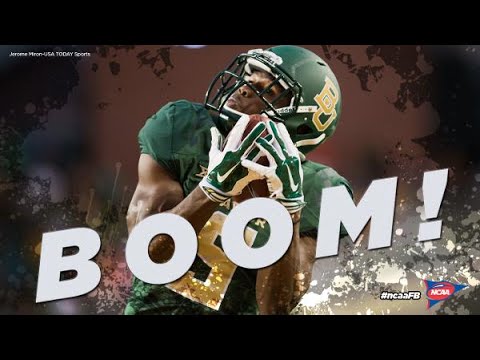