Why is McCaffrey #1? Versatility, that’s why. McCaffrey, the son of former NFL receiver Ed McCaffrey, had a coming out party last season at Stanford in his sophomore season. McCaffrey rushed for 2,019 rushing yards, tallied 645 receiving yards, and scored 13 total touchdowns, 8 rushing, 5 receiving. Again, he did this in just his second season as a college football player and also earned AP National College Football Player of the Year. McCaffrey is out to break all the stereotypes regarding “white athletes” and he’s done a great job thus far with more to come this season. Oh did I mention McCaffrey also returns punts and kickoffs? He scored one of each last season with 1,070 kickoff return yards and 130 punt return yards.

Matt Breida returns for his senior season at Georgia Southern with quite the legacy. Breida rushed for 1,609 rushing yards and 17 touchdowns last season, he lead the Sun Belt Conference in rushing yards and touchdowns from scrimmage. Breida led the NCAA is yards per carry with 7.9 with 7 100-yard rushing games. An explosive back with speed to boot, Breida looks to make a name for himself this upcoming season in order to improve his draft stock and increase his legacy as one of the best running backs to play in the Sun Belt Conference. This pick may surprise some people but Breida will be a stud in the NFL.

Leonard Fournette is a beast, he’s the only player in LSU history to rush for at least 1,000 rushing yards in his first two seasons. In 12 games, Fournette ran for 1,953 rushing yards and scored 22 rushing touchdowns. He eclipsed 200+ rushing yards in four games for LSU this past season as well, setting a new LSU record. A First-Team All American recipient, Fournette sliced and diced teams, daring them to give him bulletin board material every week. In the first play of the game against Auburn, Fournette ran for 71 yards after an Auburn player said it shouldn’t be too difficult to stop him. Fournette tied the school record with 10 games of at least 100 yards rushing and is #1 in LSU’s 1,000 yard rushers in a single season. Let’s see if he can eclipse 2,000 rushing yards this year. Dalvin Cook led the NCAA in rushing yards per game with 7.4. He rushed for 1,691 yards and 19 touchdowns and also recorded 24 receptions, 244 receiving yards, and a touchdown. Cook will be the workhorse for the Seminoles this season again as well as they look to iron out the quarterback situation with Deondre Francois and Sean Maguire. Cook, when healthy, is explosive and elusive in the open field. Cook scored a rushing touchdown in all but 1 game for the Seminoles last season to receive the Jim Brown Award, given to the nation’s top running back by the Touchdown Club of Columbus. No Oregon offense is complete without an electric running back: enter Royce Freeman. Freeman finished 2015 with 1,836 rushing yards and 17 touchdowns to lead the Ducks rushing attack. He’ll need to do more of the same to take some pressure off of transfer Dakota Prukop. As the 4th leading rusher in the nation last season, it looks like Freeman is up to the task. He averaged 141.4 rushing yards per game last season.

The 7th best rusher in the nation in 2015 hailed from New Mexico State and his name is Larry Rose III. Rose III earned AP All America Third team and was the Sun Belt Conference Offensive Student-Athlete of the year to the tune of 1,657 rushing yards and 14 touchdowns. Rose III also had 30 receptions for 283 receiving yards and 2 touchdowns, so the versatility to use him as a runner and passing option out of the backfield is certainly there. Wayne Gallman was superb in his sophomore season for Clemson, leading them to the College Football Championship with Deshaun Watson as the signal caller as well. Gallman rushed for 1,514 rushing yards, and 13 touchdowns. Gallman was the second leading rusher in the ACC next to Dalvin Cook and led all ACC rushers in rushing attempts with 282. If Clemson wants a shot at the College Football Playoff, expect much of the workload to go to Wayne Gallman to take some pressure off of Deshaun Watson. Elijah Hood may have been the most underutilized running back in the NCAA and he still managed to rush for 1,463 yards. Hood scored 17 rushing touchdowns for the Tar Heels last season and scored a touchdown in all but 3 games last season for the Tar Heels. As Larry Fedora looks to retool, look for heavy usage out of Elijah Hood to take some pressure off their new signal caller, Mitch Trubisky.

Donnel Pumphrey returns to San Diego State this year on a mission to break Marshall Faulk’s rushing record, no small feat. Pumphrey’s rushing total was lower this past season with 1,653 rushing yards. In 2014, Pumphrey rushed for 1,867 yards and 20 touchdowns. In 2015, he only rushed for 17 touchdowns. While San Diego State returns 13 starters, it should be no secret Pumphrey will be the main attraction in the Aztecs offense in 2016. Breaking an NFL Hall of Famers records is no small feat and definitely something that could get draft scouts attention.

Brian Hill rushed for a single-season Wyoming record 1,631 yards as a sophomore and this past season and he looks to prove more critics wrong, feeling slighted by the lack of recognition for his abilities. Hill was awarded All Second Team MWC for his efforts, rushing for 135.9 yards per game. But still, that isn’t enough for Hill, who was the 8th leading rusher in the NCAA. Look for Brian Hill to make a bigger name for himself this season for Wyoming. He is currently Wyoming’s fifth all time leading rusher. 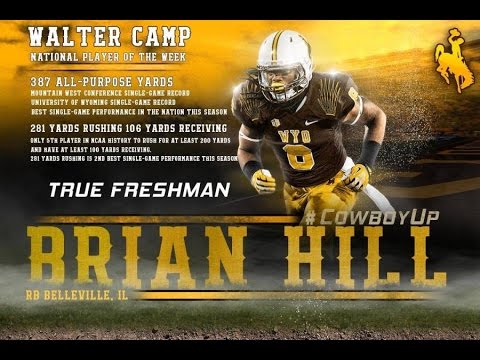