The Grueling Truth - Where Legends Speak / Gone Too Soon: The Tragic Yet Uplifting Stories of Football Players Joe Roth and Brandon Burlsworth

Gone Too Soon: The Tragic Yet Uplifting Stories of Football Players Joe Roth and Brandon Burlsworth

The Tragic Stories of Joe Roth and Brandon Burlsworth

In the history of football, you always hear about players whose careers were cut short by injury like Greg Cook, Tony Hunter, Ickey Woods etc… Today we are going to look at two players Brandon Burlsworth and Joe Roth, two men that I believe would have had brilliant NFL careers had they lived long enough to play in the NFL. The thing that ties these two players together for me was not just the fact that they were great football players. The common thread that I found with both of these young men was the impact they had on people at the time of their lives but also on people’s lives today. Anybody that ever came in contact with them will never forget them as they were more than just football players.

Brandon Burlsworth, Indianapolis Colts- Burlsworth was a walk-on offensive lineman at the University of Arkansas who, over the course of his career at Arkansas, went from being a red-shirt out-of-shape freshman to a player that would be drafted by the Indianapolis Colts. When Burlsworth arrived at Arkansas he was a sloppy 300 pounds and looked destined to never earn a scholarship. Burlsworth as red-shirt freshman lost 40 pounds to get down to 260 pounds. From there he bulked back up to 300 pounds the right way and became a dominant force for the Razorbacks. Burlsworth graduated from the University of Arkansas with a bachelor’s degree and a master’s degree. He was the first Razorback football player to complete a master’s degree before playing in his final game, the Cotton Bowl, a 27-6 victory over the University of Texas on January 1, 2000. Burlsworth was a leader on the Razorbacks team who set the tone on and off the field for the Razorbacks.

Eleven days after being drafted, Burlsworth was killed in a car accident near Alpena, Arkansas on April 28, 1999, on his way back to his hometown of Harrison after a workout in Fayetteville. Arkansas made Burlsworth’s jersey only the second jersey too be retired in the school’s history and Burlsworth impact is still felt today with the Brandon Burlsworth foundation. A movie was made about the life of Burlsworth called Greater it is a movie that I highly recommend. 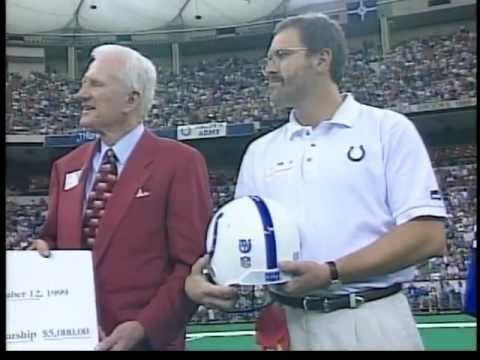 Joe Roth, QB, University of California- The story of Joe Roth on the outside looks like one of the saddest most tragic stories you could ever hear. That was until I interviewed his former teammate Jim Breech. After talking to Breech, I realized this young man had an impact on so many lives in his short time on earth and it was absolutely amazing. Originally a backup when he got to Cal, Roth won the starting role in the fourth game of the 1975 season and led the California Golden Bears to the Pac-8 title as co-champions. The 1975 team had such stars as running back Chuck Muncie and wide receiver Wesley Walker. Cal led the nation in total offense, remarkably gaining the same yardage both passing and rushing with 2,522 yards respectively. Probably the biggest win that year was a stunning upset of the USC Trojans that people at Cal still talk about.

Roth entered 1976 as a leading Heisman Trophy candidate, but the season didn’t start out well and Roth’s performance seemingly got worse as the season went on. After the season ended, Roth revealed that halfway through the season he had been diagnosed with terminal melanoma – apparently the metastasis of a mole that had been removed from his face several years earlier while playing at Grossmont Junior College. So Roth played almost all of his final season at Cal knowing that he had cancer and could die at any time. Despite his deteriorating physical condition, he honored his commitments to play in both the Hula Bowl and the Japan Bowl. According to a friend’s reminiscence, during the Japan Bowl festivities, Roth had agreed to sit for a thirty-minute autograph session; but finding, at the end of the allotted time, hundreds of children still waiting, Roth continued to sign until every child had an autograph, after which he left the building and vomited. Roth’s biggest concern was always other people and that was why he made such an impact on the people around him. One of those people was former NFL Coach Tony Dungy who played in the Hula Bowl with Roth and he sent Roth this telegram.

According to the San Francisco Chronicle “a doctor wanted to amputate both legs, but Roth did not want to die in pieces. What he wanted was to die among his friends and family at his Berkeley apartment. The ambulance delivered him, and his teammates carried him up three flights of stairs. Two days later, they carried his body back down”. Previous article
« Belinda Laracuente, The Puerto Rican Road Warrior Who Dished Out Brown Sugar By the Fistful
Next article
Gameday IQ: Join Chris Cooke and Allen Buck on this week’s edition of Gameday IQ. Learn about sports history and trivia on this week’s show plus much more! »

This list of 10 NFL players whose great careers were cut short ...