The tradition isn’t what you would call rich, but Florida State and Louisville are no stranger to seeing one another on the gridiron. Saturday’s contest in the Bluegrass State will be the 19th meeting between the schools.

The Seminoles have traditionally had the upper-hand with a 14-4 all-time record against the Cardinals. FSU lost the first-ever match-up and the last two, but once had a 12-game winning streak in the series that spanned 47 years. Looking back on the history between the schools, here’s the top five moments for Florida State against Louisville:

5. Seminoles Blank Unitas, Cardinals, 59-0
Louisville 0, Florida State 59
Oct. 3, 1953
Louisville quarterback Johnny Unitas would go on to become a Pro Football Hall of Famer and still one of the best ever to play the quarterback position. In 1953 however, he was no match for the Florida State Seminoles. Injuries limited Unitas to less than a half, but as Louisville coach Frank Camp said afterward, multiple Unitas’ wouldn’t have been enough to beat FSU. Bobby Fiveash and Stan Dobosz combined for five touchdowns in the win while the FSU defense held the Cardinals to 104 yards and forced six turnovers. Lee Corso also returned a punt for a score in the win. 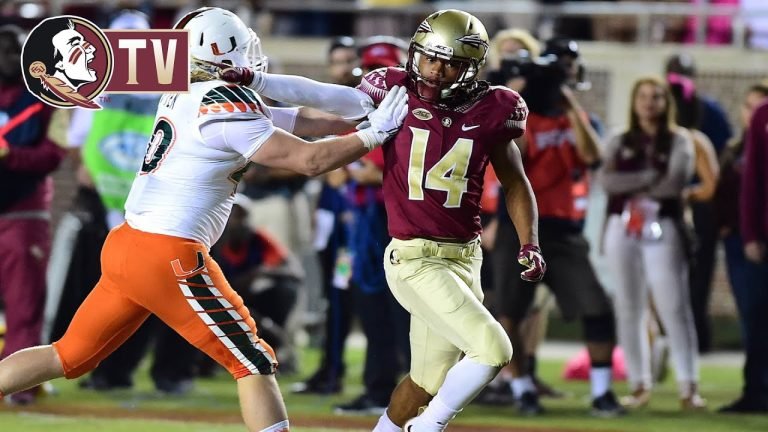 The most successful defensive walk-on since Andre Wadsworth for Florida State was without a doubt, cornerback Javien Elliott. Elliott would burst on the scene for FSU as a senior in 2015 and has since spent three seasons in the NFL. Elliott was worked along slowly in 2015, but became a major contributor midway through the season. The only interception of his FSU career would come at home against a future Heisman Trophy winner. With FSU leading Louisville 27-14 midway through the third quarter, Louisville quarterback Lamar Jackson decided to take a shot deep after a nice kickoff return. Waiting on his throw was Elliott who grabbed it at his own 13-yard-line and returned it four yards. FSU would capitalize on the turnover with a touchdown drive to take a commanding 20-point lead in an eventual 41-21 victory.

3. J.T. Thomas’ Block Preserves FSU Victory
Louisville 7, Florida State 9
Sept. 13, 1970
Defensive back J.T. Thomas broke the Florida State football color barrier in the 1970 season opener against Louisville, becoming the first black player to play on the gridiron for the Seminoles. The day concluded with Thomas breaking the Cardinals’ hearts. With FSU leading 9-7 with less than 30 seconds to go, Louisville kicker Roger Grunisen lined up for a 33-yard field goal to win the game. Thomas was able to break through and block the kick, but unfortunately for him, the Seminoles were called offside, moving the ball five yards closer. On Grunisen’s second try, Thomas — with the help of Dan Whitehurst — did it again. Thomas would block two kicks on the day to help preserve the victory on the same day he made program history.

2. Greg Allen Breaks FSU Scoring Record
Louisville 14, (9) Florida State 49
Nov. 13, 1982
Greg Allen entered the 1982 contest with Louisville needing just two points to break the FSU single-season scoring record. Allen broke the record on a 1-yard touchdown run in the final minute of the first half and would proceed to score three more times in a 35-point rout of the Cardinals. Allen finished the day with 173 yards rushing on 25 carries with two 1-yard scores and touchdown runs of seven and three years. Allen became the first FSU player ever to score 20 touchdowns in a season. Allen would finish the year with 21 touchdowns, which remains an FSU record. His 126 points that season now ranks fourth all-time in school-history and tops among non-kickers. On the eve of Halloween, Florida State was in for a scare for more than a half of football in 2014. The Seminoles were riding a 23-game willing streak, but with less than a minute to play in the first half, they were in a 21-0 hole. Tight end Nick O’Leary got the scoring started for FSU with a fumble recovery in the end zone with 33 seconds to play in the second quarter. Reigning Heisman Trophy winning quarterback Jameis Winston was forced to overcome three early turnovers and an ankle sprain that forced him to limp around the field for the entire second half, but responded with 401 yards passing and three touchdowns. Winston’s 47-yard touchdown pass to Ermon Lane early in the fourth quarter gave FSU its first lead before freshman running back Dalvin Cook’s 38-yard touchdown run with 3:46 to play put the Seminoles ahead for good. With Louisville trying to get the ball back late and FSU facing third down, Winston iced the victory with a dump pass to fullback Freddie Stevenson, who rumbled 35 yards for the game-sealing touchdown. The Seminoles outscored the Cardinals 42-10 over the final 30:33 to run away with a 24th straight victory.