It’s been 25 years since Florida State claimed its first national championship. The 1993 team delivered FSU college football’s ultimate prize for the first time. In a multi-part series commemorating the silver anniversary of Florida State’s first title team, we’ll be remembering that season with five former players who played a prominent role in the team’s success.

After breezing through the months of August and September in 1993, the calendar turned the month to October. The second Saturday of that month was a date that Florida State had circled — at least in the metaphorical sense.

“I’ve been in some pretty intense practices, but Miami and Florida week at Florida State University…it is as intense a week of practice that I’ve ever been in,” said linebacker Todd Rebol, a sophomore at the time. “The whole program’s intensity level goes up two notches. The Miami week — having known how close we were the year before — we weren’t going to let it come down to that again.”

Florida State was coming off an 11-1 finish in 1992 and a No. 2 national ranking. The one blemish however, came to rival Miami in the Orange Bowl. The Seminoles fell 19-16 in a top-5 match-up as Dan Mowrey’s last-second 39-yard field goal attempt sailed wide to the right.

“They took our goals away the year before,” Rebol said. “The seniors in 1993 had been through enough of those types of Miami games. They weren’t going to let that happen again.”

As FSU did in 1992, experiencing heartbreaking losses to Miami was hardly an anomaly. In the previous meeting in Tallahassee in 1991, FSU fell in similar fashion on a missed kick by Gerry Thomas from 34 yards away.

“Miami is one of those teams I always respected,” said Clifton Abraham, a redshirt junior cornerback in 1993. “In 1991 and ’92, we knew we had the team. We were determined to get the win this time around.”

“There’s a mental block that every team sort of has and Miami was that for us,” said Kez McCorvey, the leading receiving for FSU in 1993. “There was a lingering. There’s part of that in every athlete where there’s just something you need to fulfill. This was a hurdle we had to get over.”

Miami entered the contest ranked third in the country and winners of three straight and five of six over the Seminoles. In three of those five Miami victories, FSU was ranked No. 1. Although the game was decided on missed kicks in each of the two prior meetings, Florida State outgained the Hurricanes in both contests.

“We actually had success on offense against Miami, but we couldn’t finish,” McCorvey said. “For two years, we couldn’t score in the red zone.”

The 1992 contest began with Florida State’s Tamarick Vanover taking the opening kickoff 94 yards for a touchdown, but that would be the only time the Seminoles would hit paydirt in the contest. The rest of the scoring came on three Mowrey field goals, but he also missed three attempts.

“The offense had really performed poorly,” said center Clay Shiver, who was a second-year starter as a redshirt sophomore in 1993. “(Offensive coordinator) Brad Scott showed us 10 cut-ups of Charlie (Ward) on his back. He showed us that to emphasize what we had allowed to happen. That was a huge motivator.”

During the 1993 contest, Ward would not be sacked a single time against a Miami front seven that included Warren Sapp and Ray Lewis.

“Partway through the game, we missed a twist and gave up a pressure,” Shiver said. “I remember guys getting mad at each other and in each other’s face. We were not going to let what happened to Charlie the year before happen again.” 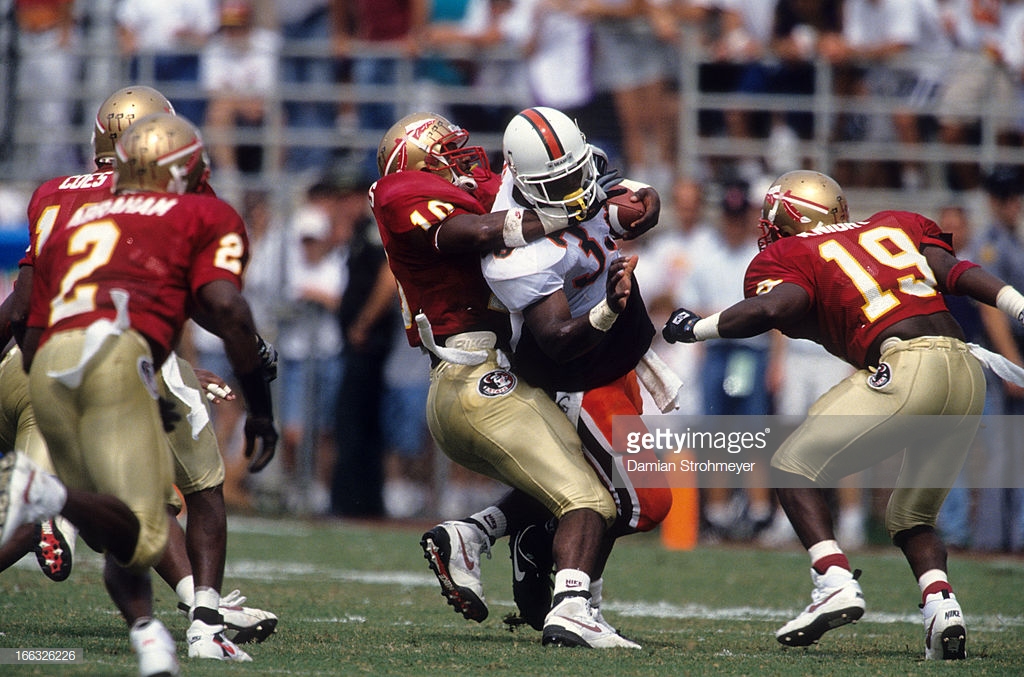 Florida State held Miami to 10 points while snapping a 3-game losing streak to the Hurricanes in 1993. (Photo by Damian Strohmeyer /Sports Illustrated/Getty Images)

It however, was the ground game that ignited FSU’s fire early on in a 28-10 win over the rival Hurricanes in 1993. Less than four minutes into the contest, running back Sean Jackson got the scoring started with an electrifying 69-yard touchdown down the sideline.

The third-ranked Hurricanes however, had come to play. With just over four minutes remaining in the first half, tailback Donnell Bennett capped an 80-yard drive with a 6-yard touchdown reception from Miami freshman quarterback Frank Costa to knot the score.

On the ensuing possession, the big play and the same sideline that Jackson went down would again be a friend of the Seminoles. Facing 3rd-and-10, Ward rolled to his right before hitting a streaking Matt Frier in stride between two Miami defenders down the right sideline for a 72-yard score just 93 seconds after Miami had found the end zone for the first time.

As was the case against North Carolina in FSU’s previous match-up against a top-25 opponent, the Hurricanes’ first touchdown would be their last. As for offense, a 2-yard touchdown scramble by Ward early in the second quarter would be the final offensive touchdown for either team.

With less than five minutes to play in the contest and FSU leading 21-10, the exclamation point would be put on the victory by FSU’s sixth non-offensive touchdown in as many games. This time, it was safety Devin Bush who returned Costa’s pass 40 yards for a score to put the final nail in the Miami coffin.

“It wasn’t going to come down to a kick again,” Shiver said. “We knew we were the better team that year and we went out and we showed it.”