The Grueling Truth - Where Legends Speak / College Football / College football picks, predictions against the spread for Week 7 all of the top 25 games

College football picks, predictions against the spread for Week 7 all of the top 25 games

Last week was our worst week of picking the games as we were 10-10, which brings us to 48-30 on the year so far. Check out the top football odds.

Check out the top sportsbooks for betting on College Football

The Jayhawks suffered their first loss last weekend but were impressive in that loss on offense. Oklahoma is suffering on the defensive side of the ball, giving up well over 40 points per game in their last three losses. The point spread overvalues the name Oklahoma, as people still do not generally believe in Kansas. Take advantage of that disrespect and take Kansas and the points. This game is a toss-up as I like the sooner in a very tight game, and a Kansas win would not surprise me.

The Rebels will lean on a ground game that averages 242 yards per game. Auburn is coming off two physical games, and I think Ole Miss will run away with this game in the second half.

Prediction: OLE Miss 37  Auburn 17(Take the Rebels and give the points)

The Longhorns are a different team with Quinn Ewers at quarterback, and that was clear from last week’s win over Oklahoma. The risk here is a letdown sets in after last week’s performance against Oklahoma, but Iowa State averages 14 points per game and will not be able to score enough to cover this spread.

Prediction: Texas 38  Iowa State 17(Take Texas and give the points)

Illinois has been the surprise team of the Big Ten season, and the Gophers, after a hot start, looked terrible against Purdue last weekend. The extra half-point makes me take Illinois, plus I like the Illini to win a hard-fought game.

Prediction: Illinois 17  Minnesota 16(Take the Illini and the points)

Volunteers fans have waited for almost two decades to be nationally relevant again, and this is that time. Hendon Hooker has been excellent for the Vols this year, and most of the money will be bet on Tennessee to cover; I disagree; I am putting my money on a Volunteers win.

Check out the top odds for betting on Alabama/Tennessee

Syracuse is one of the biggest surprises of the College Football season, as they are still undefeated. N.C.State is great against the run and has won three of the last four games played at Syracuse. Take N.C.State and the points.

If Jim Harbaugh turns Quarterback J.J. McCarthy loose, the Wolverines will win; if they don’t and decide just to run the ball, they will lose. The point spread is to big in this one. I think Michigan wins, but 7 points are too much in this game.

Check out the top odds for betting Penn State/Michigan

This spread is huge, and this year the Bulldogs have covered every spread under 30 and failed to cover on spreads of more than 30. Take Vandy to cover this one.

In their first year as an FBS school, James Madison is ranked in the top 25! They should be, as this is an excellent team, and they will show it once again by covering against Georgia Southern.

Mike Norvell is doing an amazing job of bringing the Noles back to national prominence, and a win in this one would expedite that process. I think the line overvalues the Seminoles by a little bit here, take the Tigers and give the points.

Prediction: Clemson 31  Florida State 24(Take the Tigers and give the points)

The home team has won the last four games in this series. TCU is coming off a hard-fought emotional game at Kansas; this looks to be a toss-up game and in a toss-up game always take the underdog if they are getting more than three points. Check out the best football betting strategies.

Prediction: Oklahoma State 31  TCU 30(Take the Cowboys and the points) 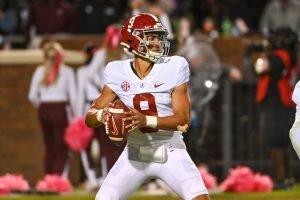 Will Levis missed last week’s game, and his status for this Saturday is up in the air. If Levis doesn’t play take the Bulldogs; if Levis does play take the points. I will pick it like Levis will not play.

Prediction: Mississippi State 27  Kentucky 17(Take the Bulldogs and give the points)

Prediction: USC 38  Utah 34(Take the Trojans and the points)