Top-10 Heavyweights of All Time

Jack Johnson is a tough one to rate. By all accounts, he was a master boxer who could also punch. The greatest moments in his career were torturing a long-retired and well past his prime Jim Jeffries, having to get off the floor to plaster the legendary middleweight Stanley Ketchel, getting knocked out by Jess Willard and playing around with a roster of mostly common opponents. He fails to make a convincing case for the lofty position many would accord him. Worse yet are the fight films, with the incessant circling of the fists like something out of an out-take from “Sanford and Son.” Johnson may well have been much better than I’m rating him, but for me, the proof just isn’t there. He is ranked in my top ten because of his historical significance to the sport. 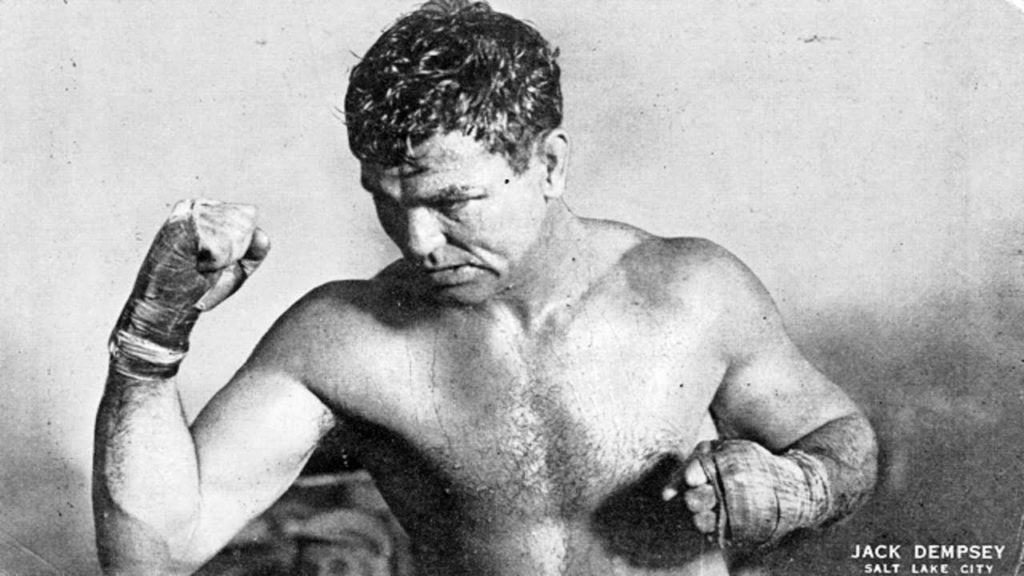 Dempsey, much like Johnson is here on historical significance. Dempsey was a murderous puncher but long periods of inactivity hurts him in at least my eyes. Dempsey much like Holmes and Marciano was hurt by a lack of great competition, but Dempsey was a cultural icon at a time when being the Heavyweight Champion was the most coveted title in the sports world.

Rocky has a heart the size of a dump-truck compensate for that short, iron frame. Marciano could be out-boxed, but never out gutted I cannot deny that he displayed true greatness in his era. It is hard for me to imagine him beating many of the men in the top ten – and impossible for me to dream of a top ten without him. He owned two wins each over Ezzard Charles and Jersey Joe Walcott, his era was short on quality Heavyweights but no ever Heavyweight ever retired undefeated.

The hard-nosed, tough as nails fighter from the city of brotherly love endured one of the most prolific careers in the history of professional boxing. His career lasted from 1965-1981 and had a record of 32-4-1 with 27 of his fights ending by way of knockout.

Joe fought through the greatest heavyweight boxing generation of all time. The fighters and personalities who fought then will be remembered as the golden years of the sport.

The four losses he had come to only two opponents, and one was the greatest fighter of all time in Muhammad Ali, the other being George Foreman.

Joe Frazier earned the title because of Muhammad Ali’s controversial suspension for refusing to enter the draft. Frazier and Ali battled on March 8, 1971, in the “Fight of the Century.” In this battle, Joe Frazier earned himself a unanimous points victory.

In 1973, he lost the title to George Foreman and later lost again to him, which led him to retire for the first time in 1976.

Joe again fought Ali in 1975 in a fight dubbed “Thrilla in Manila,” which is regarded by the majority of boxing columnists and critics as the greatest heavyweight fight of all time. Joe lost after his corner threw in the towel late in the contest, in one of the most brutal battles in boxing history.

The timeless Evander Holyfield is one of the greatest champions and overall toughest men the sport of boxing has ever seen.

Holyfield is thought to be one of the most determined fighters of all time. His “never say die” attitude made him a great fighter and even greater champion.

Evander earned his first heavyweight title when he knocked out Buster Douglas in the third round in 1990.

He will always be-be remembered for his battles with fellow heavyweight Riddick Bowe, who defeated him in 1992, but Evander was able to regain his title by beating him in 1993.

In 1996, Evander was able to regain the WBA Heavyweight title after he dominated Mike Tyson, finally knocking him out in the 11th round in 1996.

A series of fights with Tyson led to the infamous ear bite that shocked the boxing world.

His fighting career lasted from 1969-1997, 28 incredible years. His most important fight came on Nov. 5, 1994, when he knocked out Michael Moorer and became the oldest heavyweight champion in the history of boxing at 45.

George combined power, size, and agility to become one of the most dominant fighters of all time. He won his first title after he defeated Joe Frazier in two rounds in January 1973 by knocking the legend down six times.

One of George’s most notable fight was against Muhammad Ali in the “Rumble in the Jungle” in Zaire in 1974.

There is to be no shying away from the shortcomings of Lennox Lewis in this write-up; Lewis was beaten twice, by knockout, by fighters not of his class. How then, to justify a top-five ranking?

The ranking justifies itself because Lewis was in such worthy company. Mike Tyson was blasted out by Buster Douglas. Sonny Liston dropped a decision to the otherwise unremarkable Marty Marshall. Larry Holmes also dropped decisions to a former light-heavyweight, both of them in title fights. Joe Louis was blasted out in twelve by Max Schmeling.

Simply put, Rahman poleaxed Lewis. But again, Lewis was utterly dominant in a rematch (in one of the division’s few perfect performances) meaning he is one of only three heavyweights on this list to have defeated every man he ever faced in the professional ranks.

Add two victories over a faded but still great Evander Holyfield and rather than arguing about whether or not he should be top five, perhaps we should be talking instead about the top three.

His 20 successful title defenses are second only to Louis’s 25. With an unmatched jab and great ring smarts, Holmes described his crafty style by saying, “You always got to make somebody drunk before you mug him.” The division wasn’t great during his reign, but he beat everybody he fought in his prime. He showed tremendous heart getting off the canvas to stop Earnie Shavers, Mike Weaver, and Renaldo Snipes. Never got his just due, because he followed the greatest of all time!

Mr. Joe Louis Barrow fought through one of the most troubling times in our nation’s history. World War 2 was in full swing in Europe and on its way to the states. Joe’s career lasted from 1934-51, and over that time he had a record of 68-3.

Nicknamed the Brown Bomber, he helped bring boxing back into the mainstream after the Jack Dempsey era had concluded. Before one of his biggest fights against Max Schmeling, Louis traveled to the White House where President Franklin D. Roosevelt was quoted as saying, “Joe, we need muscle like you to beat Germany.” Joe Louis was also featured on recruiting posters all over the country to help build America’s forces to defend Democracy against Adolf Hitler and the Nazi’s.

Joe Louis won his first world heavyweight title in 1937 and held that title for eleven years, eight months and seven days. Successfully defending his title a record 25 times, he retired as the champion in the later part of 1949.

Joe Louis was a legend and one of the greatest and most loved athletes in American history.

It would be hard to imagine another career that could make so elegant a case for the title of The Greatest. Ali conquered great fighters of every style, and in most cases, he did so in two or three different fashions, as the years forced his style to evolve from reliance on speed to a reliance on guile. Ali’s speed was unmatched (both hand and foot), his power was underrated (as Cleveland Williams found out), and he could take a punch with the best of them (who else could have emerged a winner in both Kinshasa and Manila?). If Ali hadn’t come along to win where they said it couldn’t be done, all arguments about the greatest heavyweight of all time might well have come down to Liston vs. Foreman. Ali took care of the out-and-out knockout punchers (Liston, Foreman, Shaver’s), the relentless grinders (Frazier, Quarry, Chuvalo), and the master boxers (Patterson, Folley). He won both by not being hit (Liston) and by proving he couldn’t be hurt (Foreman). He would have found a way to beat anyone. He was truly the greatest of all-time.

Most boxing fans who look into the history of the sport know ...