The Grueling Truth - Where Legends Speak / Boxing / The Truth Behind Lennox Lewis vs. Riddick Bowe and Why it Never Happened

The Truth Behind Lennox Lewis vs. Riddick Bowe and Why it Never Happened

Digging deeper into one of the biggest misses in heavyweight history

Back in 1992, the best heavyweights in the world, Evander Holyfield, Riddick Bowe, Lennox Lewis, and Razor Ruddock, signed to take part in a mini-tournament to settle the heavyweight succession. It was not a binding contract but there was a letter of intent for the winners of Bowe-Holyfield and Lewis-Ruddock to meet in a final showdown in 1993. It was similar to the HBO tournament in the mid-1980s that Michael Spinks pulled out of, which by the way was the right thing for Spinks to do as he pocketed $5 million to fight Gerry Cooney and would then go on to fight Tyson in one of the biggest grossing money fights of that century. The ’92 tournament, however, would not have that happy ending.

Before Bowe even won the titles from Holyfield on November 13, 1992 (Lewis had kayoed Ruddock two weeks earlier on October 31), Bowe’s manager Rock Newman dropped clear hints their first title defense might not involve Lewis, but a date with George Foreman in China. Now a match with Foreman would have made much more financial sense than a Lewis fight, but of course, this plan would not come to fruition.

Bowe infamously tossed the WBC belt (a replica belt recently bought from Holyfield) into a trash bin at a press event in London in December before the WBC could strip him for refusing to box Lewis. Bowe’s team actually fished the belt out of the garbage can after the cameras and reporters were long gone. Maybe Bowe should have replaced the belt with Rock Newman.

Bowe wound up making his first defense in February against the badly faded Michael Dokes and then his second in May against another on-the-way-out fighter in Jesse Ferguson.

HBO wanted to make Bowe vs. Lewis and reportedly offered $32 million to the two sides. Newman initially offered Lewis’ manager $3 million of the total, which equated to an absurd 90-10% split. Once again, here the problem is none other than Rock Newman. The next suggestion from the Bowe camp was $2 million to Lewis to fight on the undercard of Bowe’s first WBA/IBF defense with a promise to give Lewis a shot in his second defense of the title. Maloney didn’t accept, citing distrust that Bowe’s camp had already broken their word once after the Ruddock fight. Rock Newman was not trustworthy in Lewis camps estimation? No surprise.

Another plan was that both Lewis and Bowe would get $5 million each, with the winner getting an additional fortune from the $32 million pot and the loser gets training expenses. Of course, Newman balked at this also and instead came up with the idea of a $32 million dollar winner-take-all fight! Lewis’ team discussed that proposal with Lewis and Lewis eagerly accepted. The next day Frank Maloney faxed an acceptance of the winner-take-all option back to Newman. “I never had a word back from him,” Maloney later stated in the book Lennox Lewis Champion by Ken Gorman. Imagine that Rock Newman never responded when the offer he made was accepted.

Two years later in June of ’94, Lewis and Bowe would actually sign a deal for Lewis to defend against Bowe in Las Vegas in March of 1995, after Lewis made his mandatory defense against #1 contender Oliver McCall in September ’94. Of course, this one is on Lewis as he got upset by an inspired “Atomic Bull”.

So, nowadays all we get to here is how Bowe was a chicken and I think the real chicken was Rock Newman who loved the attention of being the manager of the Heavyweight Champion of the World. If you have any common sense at all as a boxing fan I think it is safe to say Riddick Bowe being in fear of another man is a huge stretch! Watch his fights against Evander Holyfield and Andrew Golota and tell me that is a man that would be in fear of another boxer.

People who do insinuate that Riddick was scared of Lennox often cite their 1988 Olympic Gold Medal match as proof of Bowe being intimidated. That is simply not true! Bowe dominated the first round and had a German judge take a point away from him for absolutely nothing. Lewis did control the second round but the two standing eight counts were to a Bowe who was not that hurt, then he inadvertently waved the fight off, giving Lewis the win! If you don’t want to believe me, watch the link of the fight below?

This fight not happening had nothing to do with the two fighters, it came down to one man Rock Newman trying to protect his own fame. It would later bite him in the ass when a lesser threat to Bowe named Evander Holyfield would decision an out of shape version. Riddick Bowe against Lennox Lewis would have been an all-time great fight and none of us truly know who would have won, but let’s quit closing our eyes and acting like Riddick Bowe was afraid!

Riddick Bowe is a lot of things, but afraid he never has been. 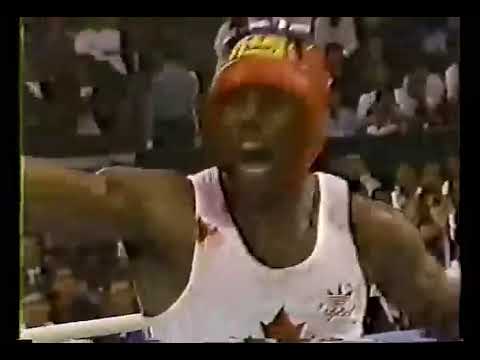