A foundational figure for so many

In 1929, the United States was in turmoil. Early in the year the bitter rivalry between two Chicago gangs ran by Al Capone and George “Bugs” Moran reached its climax during the legendary St. Valentine’s Day Massacre. And as the year was closing, the country’s economy took a far more damaging hit than anything seen in its history when the stock market plummeted and the Great Depression was ignited. The streets were plagued with gangsters and crime, and the working man was soon to drown in desperation.

For the boxing world, the heavyweight division was also shaken up. Heavyweight champion Gene Tunney’s retirement left the class somewhat hollow and scrambling for a new successor. The welterweight division was rattled when N.B.A. welterweight champion Joe Dundee was stripped of his title. A fight with Jackie Fields, who was recognized by California as the champion in ‘29, was supposed to clear up matters but instead added to the chaos when Fields won on a disqualification. But there is always a positive side to look forward to, especially for the sport of boxing – an endeavor that thrives on desperation and hunger. The game had its issues, but like everything else it would work itself out. A few thousand miles off the coast of California things were looking bright for boxing.

The sport was expanding and opening new opportunities when it became legalized in the Territory of Hawaii. It was in 1929 that a former bootleg battler named Francis Haywood Wright ascended from fighting in smokers for $5 a bout to training and managing boxers. Fighting in the smokers caught the eye of most of the locals and his courageous battles were the talk of the town. The events were invitation only, but it didn’t stop his younger friends and followers from getting in to see him. Wright was a hero to the locals and an impressive all-around athlete before becoming the greatest trainer in Hawaii history.

When he was younger, Wright would hang out with some of the older and bigger kids who would tease him by calling him “shark bait.” The name Sharkey developed from it and stuck with him for the rest of his life. His fighters however, many of which had a close relationship with him, referred to him as “Pop”. 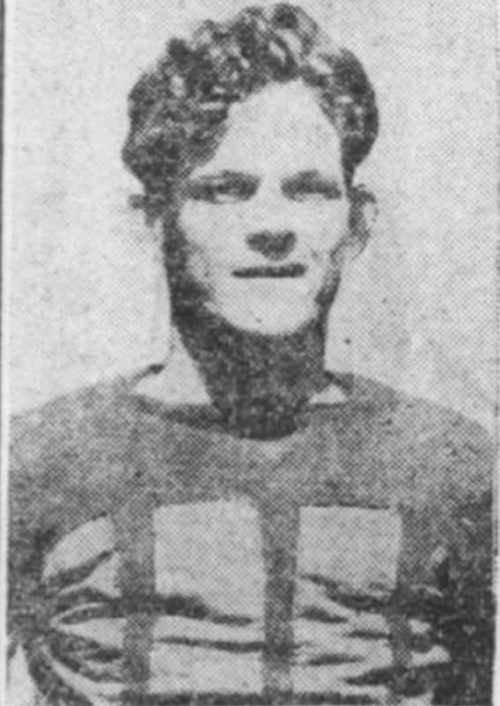 His parents were born back in the states, but Wright was an island native, born on December 2, 1902. As a young man he excelled at swimming competitions, baseball, boxing, and football. While attending St. Louis High School he played on the football team on both sides of the ball. At 6’ and only about 150 lbs. he was surprisingly a terror on the field, something that caused him to be removed from a few games for roughing up other players. He would go on to be a captain on his team in his final year and was a star player on both the offense and defense. As a senior he led his team to win an Interscholastic League Championship. With a Dick Butkus type of reputation on the field and a bloodthirst in the boxing ring, you could assume that he was unapproachable but there wasn’t a kinder soul in Hawaii.

He was known around town as an honest and caring man to many of the younger kids who looked up to him as well as the up-and-coming fighters that came after him. Whenever a kid needed some money and asked him for it, he gave it to them. “You got to have money in this business. These kids come around and say, ‘Lend me a buck or a half or a quarter.’ So, I let ‘em have it. Guys say I’m crazy for giving money away. But you gotta take care of the kids. It’s hard to understand if you don’t know. Some kids live in the slums. They didn’t have a good dinner. It’s better to lend ‘em money than have ‘em steal it.” He always took care of those that he could and understood the hardships of those that needed it. 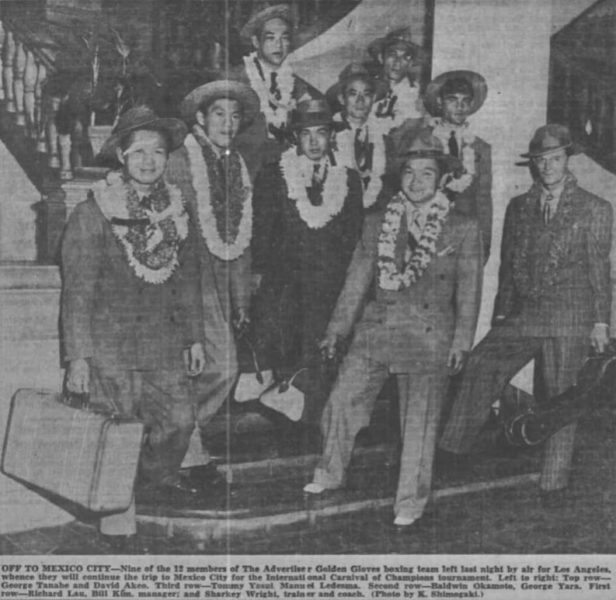 Years later, when asked what made him turn from a bootleg boxer to training fighters, Sharkey explained modestly, “I had about 80 such bouts and won close to 50 of them. That didn’t exactly make me a contender for a title and in 1929, when boxing was legalized here, I decided to train and manage fighters.”

Sharkey worked as a state tax official during the day and trained fighters at night. His guidance helped many of the islands’ tough kids fine tune their skills. Even the kids that missed the proper guidance and had got themselves into trouble were not forgotten by Wright. Wright would stop in and referee some of the fights scheduled at the local Oahu Prison which usually resulted in a good show. There wasn’t much that Sharkey didn’t cover in the boxing business: he acted as a referee, matchmaker for a short time, amateur trainer, professional trainer, and he developed champions in the AAU and as world champions. Many of the amateur and professional fighters that came out of or trained in Hawaii in the 1930s and 40s were under Wright’s guidance at some point. He trained four AAU champions in Johnny Manalo, Tsunichi Maruo, David Bunda, and Benny Aspostadiro, who would go on to be a member of the state boxing commission. In the early 1940s he was asked to train the Catholic Youth Organization team and did so for 12 years. During his time as the trainer for the CYO his teams won 11 Oahu titles and 11 Territorial championships. 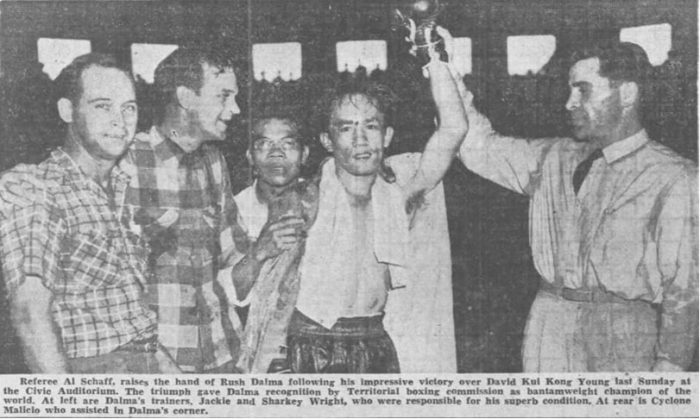 Wright trained a variety of talent and was patient with the young men. Sharkey explained his system, saying, “Training a fighter is like painting a good picture. It takes a long time and it’s a lot of hard work. A kid comes down to the gym and you get him fixed up with everything he needs. Then you have him do exercises and punch the bag and anything he wants to for a couple of weeks. Just let him alone. You watch him all the time to see if he really wants to fight and how he moves. Then you put some gloves on him and start teaching him how to jab and hook and block. You have to teach him a style that comes natural. Everybody is different.”

Some fighters were molded by Sharkey from the start, others came to him for help in a few bouts. His teachings were passed down to fighters such as Johnny Yasui, David Kui Kong, Nate Huskey, Rush Dalma, Johnny Hutchinson, Joho Shiroma, and Reno Abellira. He also trained such top talents as world flyweight champion Dado Marino, world flyweight and bantamweight champion Little Dado, world middleweight champion Carl ‘Bobo’ Olson, and welterweight contender Frankie Fernandez. 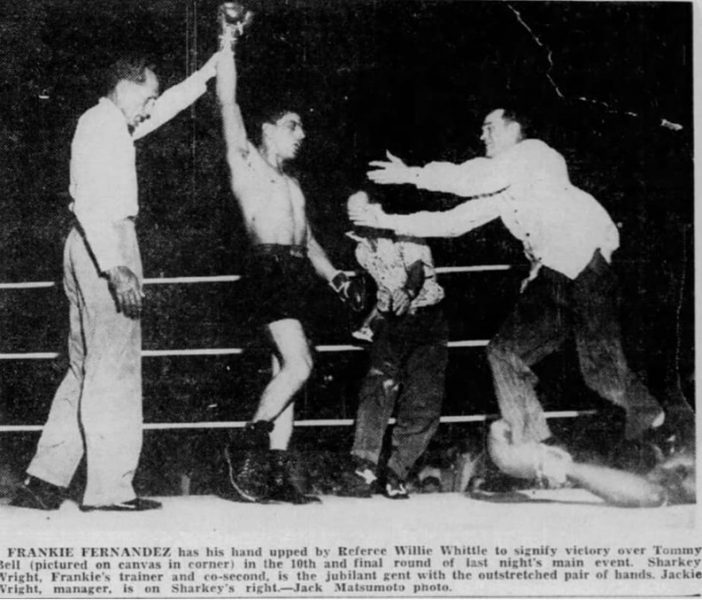 Before Bobo Olson fought Paddy Young on June 19, 1953, for the American middleweight title (which was an elimination bout for the vacant world middleweight title), he sent word back to the islands to make sure his mentor got the credit for getting him where he was. Olson’s message was simple and clear, “Please tell Sharkey Wright that if I win the title, it will be mostly because of his training. He gave me all the confidence that I needed and taught me how to fight. I owe a lot to Sharkey.” And just four months later, when Olson defeated Randy Turpin for the world middleweight title, Sharkey was one of the first people he called to tell him the good news and to thank him again for his teachings. Sharkey had been telling people for years that Olson was going to be a champion and it was one of the trainer’s biggest thrills. Another thrill was when his protégé, Frankie Fernandez, knocked out the very talented Tommy Bell in 1948.

But finally, some of the things Wright had seen in the boxing business had got to him to the point he was finally done with it all. He had seen crooked managers taking money from their fighters, whereas Sharkey had given money to his; crooked trainers that would throw their fighters into deep water way too early and walk away from them as they drowned, whereas Sharkey had patiently worked with his boys. And so instead, he focused on his job at the state tax office where he would eventually retire. In his later stages of life, he suffered from many different health issues that varied from partial blindness to a heart attack to pneumonia. He passed away on August 20, 1974 at the age of 71. He left behind a wife, Wilhelmina, and seven children. He also left a lot of people from Hawaii proud to have known him.

“He was our leader. We idolized him. And there wasn’t a thing we wouldn’t have done if Sharkey Wright had asked us. That’s how much we thought of him when we were a kid. We looked up to him not only because he was bigger and older than us, but also because he was a fine athlete, always a lot of fun and ever considerate and thoughtful of his friends. We used to tag along wherever he and the other boys of the neighborhood went. He never chased us away. Some of the older boys didn’t want us around, but with Sharkey protecting us, they dared not pick on us. He included us in everything he did. Those were glorious days and happy days – days loaded with fun and adventure. We will never forget them. And we thank Sharkey for them.” – Andrew Mitsukado of the Honolulu Star-Bulletin

Previous article
« Game Preview: Can the Hoosiers Knock Off the Wolverines?
Next article
Rockpile Report: Recapping the 2018 Season »