“The Set-Up” is Arguably the Greatest Boxing Film Ever Made

“Well, that’s the way it is. You’re a fighter, you gotta fight.”— Bill “Stoker” Thompson

The year 1947 had been a very good one for boxing films. To the surprise of many, John Garfield’s mini masterpiece, “Body and Soul,” had achieved major commercial and critical success.

“Soul” was gritty and edgy, with no redemptive happy ending.

Two years later, RKO Pictures opted to make their own film about the brutal world of pugilism. “The Set-Up” was adapted from a poem penned by Joseph Mancure. The screenplay was written by Art Cohn who replaced some of the stereotypes, and introduced ethnic diversity, but left in the “set-up” and several unscrupulous characters.

Robert Wise directed the film. Wise was talented. He’d edited a little movie called “Citizen Kane” in 1941, and soon after, gravitated to directing. His early efforts included “Curse of the Cat People,” “The Body Snatcher” starring Boris Karloff, and “Blood on the Moon,” a noirish western featuring a very young Robert Mitchum.

“The Set-Up” would be Wise’s ninth directorial effort. Character actor Robert Ryan was offered the lead role in the film. Ryan had landed on the Paramount lot in 1940. His career had grown slowly during the 40’s with Ryan playing mostly villains and tough guys. His breakthrough performance came in a film called “Crossfire.”

Controversial for its time, “Crossfire” is an exciting thriller\drama that deals head-on with bigotry and hate. Ryan was nominated for an Oscar for his riveting performance. Other juicy roles followed.

When offered the chance to play a good guy in “The Set-Up,” Ryan agreed. It didn’t hurt that Ryan, while attending Dartmouth University years before, was an amateur boxing champion. His boxing skills brought realism to the fistic scenes.

Told in real time, the 72-minute film tells the story of a seemingly over-the hill-boxer, Bill “Stoker” Thompson (Ryan). At 35, he’s an old man in the ring, but outside it, he still dreams of getting one more shot at some big money. In the opening scene at a place called the Hotel Cozy, he tells his wife Julie (Audrey Totter, in a fine performance) that he’s only one punch away from a top spot. The atmosphere is gloomy.

Julie answers with a gentle, but telling, rebuke.

She’s tired of seeing her husband get his brains scrambled. She wants him to quit and won’t be going to the arena to witness another beating. Stoker is crestfallen. His wife always goes to his fights. He tells her he’s going to win. His opponent is Tiger Nelson, a mob-controlled, undefeated hot-shot.

What Stoker doesn’t know is that his weasel manager Tiny (George Tobias) and cut man Red (Percy Helton) have already made a deal for Stoker to lose. They decide to keep the information to themselves, figuring the old guy doesn’t have a prayer of a chance to win.

The film follows Stoker to the arena and a crowded locker room. He’ll fight last—so he has plenty of time to tape his hands and reflect on his career. He has no choice, as the fighters around him represent the peaks and valleys of a professional boxer’s life. As Stoker waits to fight—the scene cuts to Julie, depressed and wandering the dark streets of the city, pondering what to do. She loves Stoker, but can’t bear the thought of witnessing him receiving another pounding.

Stoker’s fight in the smoke-filled arena is a free-for-all of guts, pride, and betrayal. The camera work is superb. The tight shots bring the viewer into the action. It’s brutal and bloody. Director Wise cuts to members of the blood-thirsty audience; a blind man who enjoys hearing about the violence; a woman who complains every time the referee breaks up the fighters; a man throwing punches at the air. The quick cutting from the match to the frenzied fans creates feelings of both disgust and despair.

Stoker is finally told that he’s supposed to lose the bout, but, after battling the much-younger Nelson evenly, how does he do that? This is his last chance for redemption, but if he wins he could end up in an alley with a bullet in his back.

Ryan is superb as Stoker. Tough and tender, ethical and compassionate, he injects Stoker with a tragic and heroic power. Ryan uses his eyes effectively in a number of scenes. When he talks about being “one punch away” they light up and sparkle. But later as he gazes at the hotel where his wife is or the empty seat he bought for her in the arena, despair and a quiet despondence creep in. It’s impossible not to cheer for him.

“The Set-Up” is a brilliant film filled with grit and depth. Stoker is a man desperate to prove himself. He’s been battered and knocked down, but he won’t give up.

All he’s trying to do is survive. 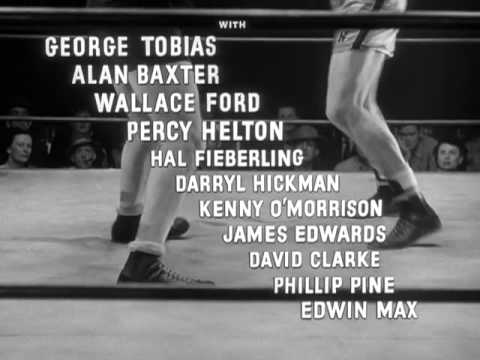