There are high hopes for 25-year-old Joshua John of Port Talbot, Wales. He’s had plenty of amateur experience, and in 2019 he turned his attention to the paid ranks.

Based at the bustling, thriving, St. Joseph’s gym in Newport, Wales, he’s a talented orthodox boxer who competes in the super bantamweight weight class.

I caught up with Joshua for a few questions on his career so far. 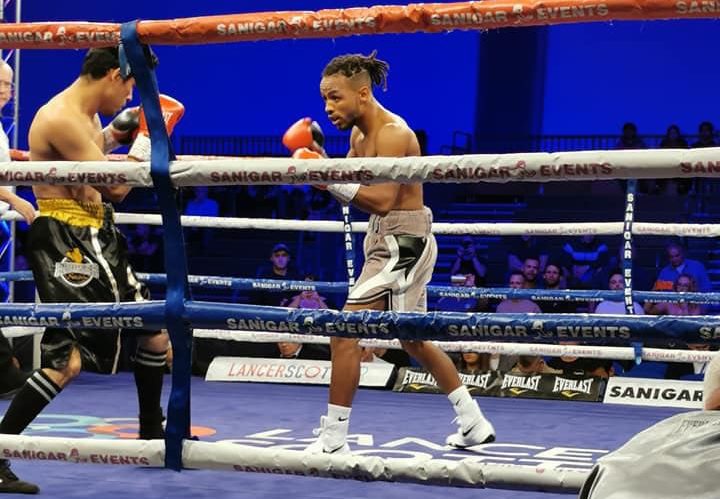 I got into boxing when I was 10, my coach Pappy Jones opened up a gym across from my childhood home. Me and my friends used to play football on a patch of grass next to the gym, so we all decided to join.

I firstly trained at Fairfield ABC and then we changed the name to Britton Ferry ABC. I was trained by Pappy Jones, Neil and Kevin, which I currently still train there, three times a week, as well as Newport.

I had 97 amateur fights and won around 70. I had loads of highlights, but the few that stand out were when I went to the European Youth Championship and Commonwealth Youth Games, where I came home with a bronze medal. I won the Welsh Championships, several times, and I boxed in the British Championship live on Boxnation TV, in Sheffield, a memory I’ll never forget.

To be honest, I hardly followed boxing growing up; I think I would have to choose Floyd Mayweather and Vasyl Lomachenko.

I got a great team behind me, and I’m more than happy with them, I’m managed by Chris Sanigar and trained by Tony Borg.

You train at St. Joseph’s in Newport. Describe the gym and who’re the characters there?

What a gym! Me and Pappy both decided for me to come to this gym and be trained by Tony Borg. Personally, I think that’s the best decision we have ever made; it’s full of talent from amateur to professional. We have all become good friends, we all push each other to the maximum and work very hard. To be honest, there are loads of characters there, while working hard, we are constantly having a laugh and a joke with each other. It’s a great gym to be a part of.

I spar so many different fighters leading up to my fights, the list can go on and on. I think I’m quite lucky as when I’m back home (Port Talbot), I get to spar the likes of Jay Harris (Swansea) and when I’m up Newport, I get to spar the likes of Andrew Selby – two world-class fighters. I also spar Lance Cooskey Jr. and Jacob Robinson. There is always plenty of sparring in St. Joseph’s (Newport). I even do some good rounds with some good amateurs, Jordan Joseph and Elijah Carrol. Also, back in Britton Ferry boxing club, I spar often with my close mates Nathan Andrews, Stacy Pearson and Dean Bradley who are really good amateurs as well.

My favourite part of the training has got to be sparring.

I got my own plastering business as well, so I still work as well as box for now.

I turned when I was 24 and yeah I could have turned professional earlier, but I wasn’t ready, and I knew I wasn’t ready. But now, I’m more than ready, and I wasn’t getting many amateur fights. I wanted to reach 100 contests before turning professional, so I only needed three more. Still, I was only getting like 1-2 fights a year in the last couple of years, so me and Pappy decided it was the right time.

I think I got a slick style. I believe I’m hard to hit, I feel like I can box any style.

You made your professional debut, in Swansea, back in September 2019. How did you feel going into that fight?

My debut (against Jose Aguilar), what a night that was, the best night I have ever had. I felt the best I have ever been, fit and strong, which I didn’t expect because 2-3 weeks before I didn’t know if I was going to box on the show or not because I failed my brain scan back in June. I had to see a specialist and was waiting for confirmation, to say that I was fit to box on the Swansea show. So that was a difficult time not knowing if I can box again or not.

You’ve had two fights, winning both. How do you rate your performances?

I won every round of both fights comfortably; I think both performances were very good.

I think the 2nd fight against Ricky Leach, I performed best only because I didn’t have nothing to worry about leading up to the fight. Not like the Swansea one, with the brain scan.

I’m still running regularly, and Tony Borg has got me and the lads training every morning on FaceTime to him and got a bag set up out the garden, so we are all still training.

Yeah, I got a few good sponsors, but Bully King kennels and Tidy Tires are continuing to support me through this difficult time, and I really do appreciate it.

To be honest, I was hoping to get any type of title by the beginning of next year (2021). Obviously, with all this going on that might have to change. For opponents, I’m not going to target anyone over social media or anything like that. Still, when the time’s right, I’ll be ready to fight anyone in the super-bantamweight/featherweight divisions.

My ambitions, I’m here to become the best I can be and hopefully that’s a world champion. With the team I’ve got behind me, I believe that is possible.

I struggle to find spare time as I’m still working in the days and then boxing in the evenings and weekends. I try to have a Saturday off, and when I do have it off, I just want to chill in the house and do absolutely nothing, to be honest. But, yeah, I definitely don’t have time to do any other interests apart from boxing just yet.

People can follow my journey on Instagram @jjoshuajjohn and Joshua John on Facebook.
Thank you very much for reading this, hope you all stay safe through this difficult time and a massive thanks to the NHS.