Middleweight southpaw Gerome Warburton is another prospect making waves, as he’s won six fights since his debut in 2019.

The Welsh boxer from Colwyn Bay has been on the road and winning. North Wales is not generally associated with boxing but, recently, a few prospects have emerged like undefeated Sion Yaxley (6-0) and Osian Williams (2-0).

The 24-year-old known as ‘The BreadMaker’, is quick, skillful and hotly tipped to do well. I caught up with Gerome to see how his career has gone so far. 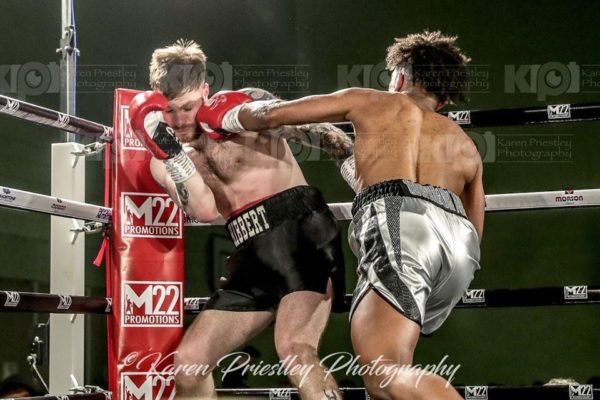 When I was 14, a couple of mates asked if I wanted to go. I loved it; they stopped going. I carried on and never looked back.

I had my first fight at 16 and not much of a youth career. So by the time I got my experience, in the ring, I was a senior – boxing older men without a head guard. Which has done me a world of good because some lads find the transition hard, from youth to senior. My highlight was either boxing in the Welsh Senior finals, which I sadly lost by a split, or boxing in Estonia when I picked up a bronze medal. I had sixty bouts winning around forty.

I didn’t really watch much boxing, only recently started focusing on it a lot more. I would say either Floyd Mayweather or Amir Khan because they were only the boxers I watched when I was younger.

You train at Dyffryn gym in Colwyn Bay, North Wales. Describe the gym and who’re the characters there?

There is no place like it! The vibe is good, everyone is hungry for success. But the little ones coming up are the characters in the gym. They’re cocky, but their boxing makes up for it, and I could write a book about my amateur career… that’s all I’m saying. I’m managed by Chris Sanigar and trained by Wesley Jones.

No, I work full time in Boots as a pharmacy advisor.

Favourite part of training? Who do you spar in preparation for fights?

Definitely travelling around the UK with my teammate Sion Yaxley for sparring. In Bolton, England, I spar Alex Matvienko’s boys. Also, at Chris Sanigar’s gym in Bristol, England.

An awkward and very elusive southpaw.

You made your professional debut, in the historic York Hall in London, back in February 2019. How did you feel going into that fight?

I felt unbelievable. York Hall to box my debut was unbelievable and not many people can say that. I trained like a man possessed. I told myself, ‘I will not come back to Wales defeated.’

You’ve had six fights, winning all. How do you rate your performances?

My first one was my best, against Celal Ozturk, boxing another lad on his debut. I had to be on form.

But adjusting to the pros is a massive step-up, so I’ve boxed journeymen to give me that experience, and give me the feel, of what the pros are all about. Every fight I’ve been better and better.

You’ve been kept busy. How important is is to be boxing regularly?

It keeps me focused and hungry, but I’m still taking every step as it comes.

The debut in York Hall. I stopped my opponent in the second round, by TKO, dropping him twice.

My training hasn’t changed much, just no pads and sparring, which is the best part for me, but the hard work continues – no matter what!

I’ve had six fights, and already I’m getting asked about a Welsh title. That would be good, but I haven’t done a six or eight-rounder yet. My manager will tell me when I’m ready, and it would be nice to win a title now. But once you win that, the doors are open for anything, and I haven’t got that experience as a pro yet. When I’m ready, I’ll be ready to take anyone and everything, we going to cash in 100%.

The British title is my main, but once you win that, the World title could be one fight away. So the sky is the limit.

I have a 2-year-old, so spending my free time with him and my girlfriend is top of the list. But, I’m focused on boxing so any free time, I’ll go for a cheeky run or watch films and play Xbox.

Previous article
« SNBS – Haarms now BYU’s riddle; Guessing Ballard; IU & UK recruits better off saying nothing
Next article
This Is What Pro Sports Athletes Need to Do to Manage Coronavirus »