A glance at the particulars

Before we glance at the numbers, the single most important data point of any, regardless of how you felt about the individual decisions, is that in successive weekends the headliners are potential Fight of the Year candidates. In a sport as grim as this, count yourself lucky to have witnessed such a rare event. Tuck it away in the memory banks and save it for the grandchildren over a family night in front of lesser fights.

As for the Golovkin–Derevyanchenko fight itself, once again we had two top-5 guys (Golovkin #1; Derevyanchenko #3) in a talent-laden division hashing it out over the 12-round journey, and once again Golovkin proved himself must-see t.v., while Derevyanchenko lived up to his moniker, “The Technician”.

Ebbs and flows were aplenty here, with “GGG” scoring a knockdown early and then opening a nasty but manageable cut not long after. Sergiy was able to turn the tide with his consistent combination punching–his left hook to the body being especially effective, nearly doubling Golovkin over multiple times.

Derevyanchenko’s pace showed in the numbers as he tossed a total of 935 punches, a rate of about 78 per round. This was 285 more than Golovkin threw (650) and an amount no one has managed to muster against the Kazakh veteran. The closest being Kassim Ouma’s 932 all the way back in mid-2011. Despite the sizable difference in that category, the Ukrainian only landed 27 more (188, versus 161 for Golovkin), an indication that Golovkin was more pinpoint in his shot placement.

That was the case. Boxstat states Gennady held a +5% differential all-around but clearer edges in the jab and uppercut grouping (+6% and +7%). Golovkin also connected on more jabs (101 compared to 86), highlighting once again his stature as one of the premier in the entire sport. In fact, if there is one universal to Triple-G’s fights, it’s that no one beats him there. Mightily impressive for a man his age and one whose reputation is founded more on punching power than boxing skill.

In the end the statistics once again sketch what most of us saw and they can give weight to what scorers of either Golovkin or Derevyanchenko favored, barring the effect of the punches. Work rate or accuracy, that is the question. 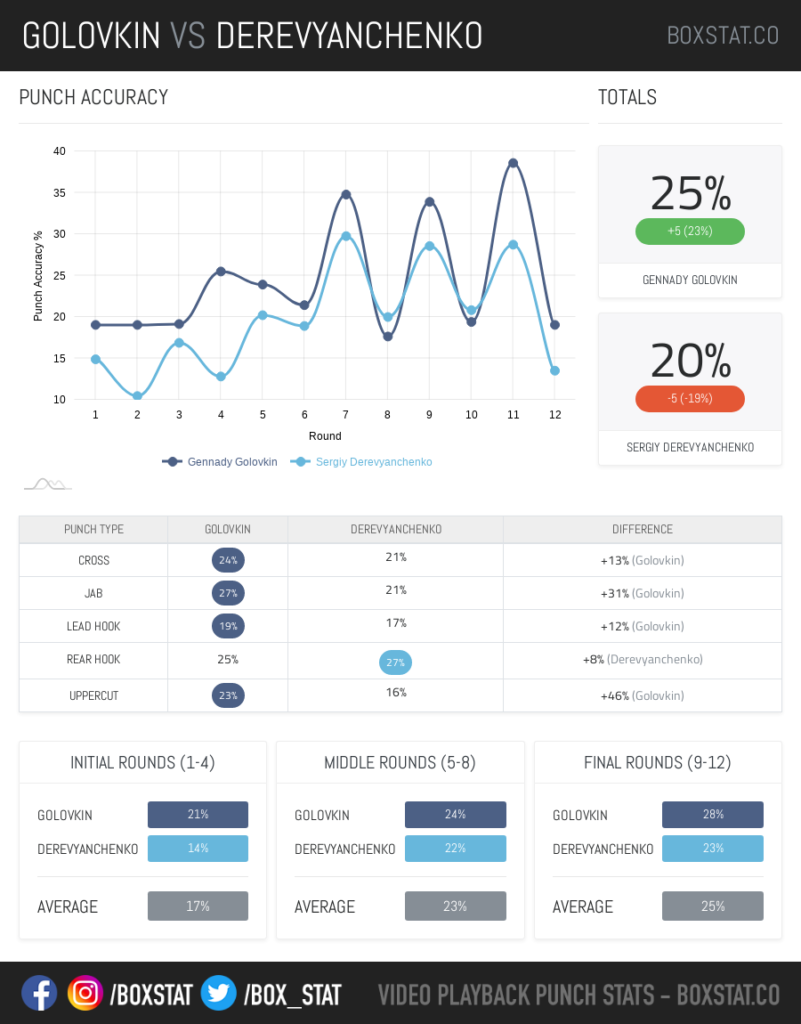 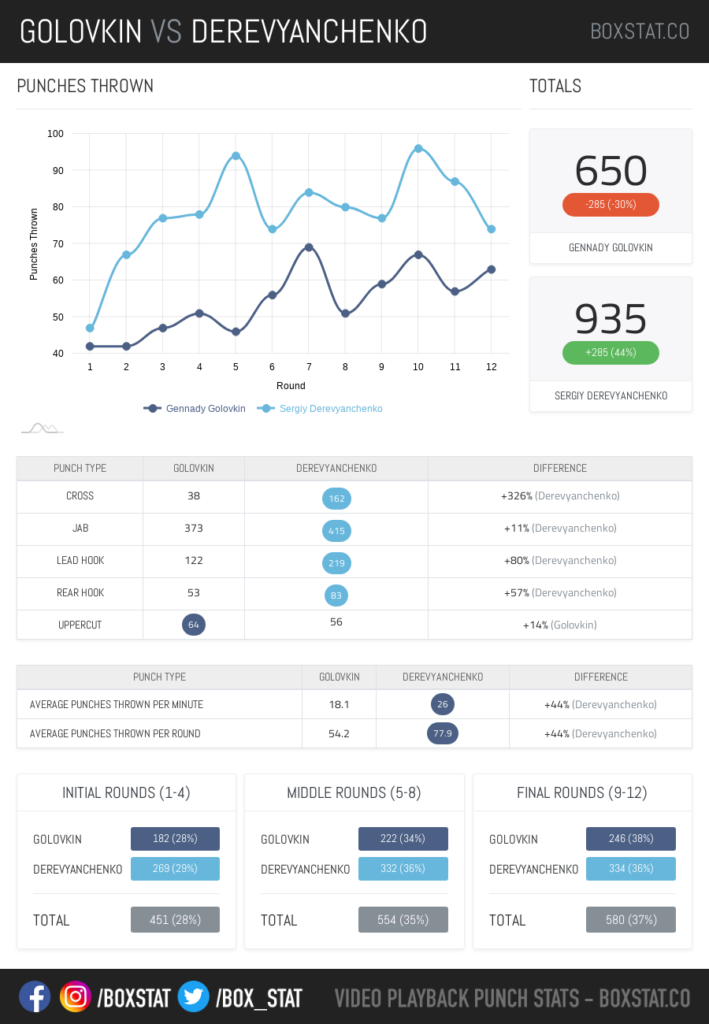 Where do both head after the fact? I don’t think many would mind a rematch. Whether that’s on the menu is hard to gauge, given the push for a third Alvarez fight from DAZN because of the revenue and subscribers it would generate. After all, they do run a business. Of course “Canelo” seems to have moved on and with his nonsensical special status from that alphabet body I can’t bring myself to name, he has the freedom to do what he likes.

There is rumor floating around that #9-ranked Kamil Szeremeta could get a shot at GGG. He was on the radar before Steve Rolls was penciled in and he looked solid, albeit nothing special, on the Golovkin-Derevyanchenko undercard. At 37, the hourglass is running out, so we can be sure that whatever makes the most dollars makes the most sense.

Derevyanchenko is likely up for a softer touch, as well, seeing as his last three have been stiff tests. Being with the promoter that he is, a Jermall Charlo fight could be made without a hiccup, though I suspect he will push for a rematch because it’s more lucrative.