Yet another high-quality welterweight from Lithuania

Stanionis’ initial leap into martial arts was at the age of 8, becoming a practitioner of the relatively new Japanese MMA style, Kudo, “The school of an open mind”. After displaying a penchant for punches early on, he converted to traditional boxing at 12 and embarked on a successful amateur career that saw him win a host of tournaments, both nationally and continentally (a full list can be found here).

After working his way up to the international stage, most notably finishing 5th at the 2015 World Amateur Boxing Championships, Stanionis won the right to represent Lithuania in the 2016 Rio Olympics. While losing a close decision to what became the arguable winner of the gold match in Shakhram Giyasov, the current resident of Southern California called the time an “honor,” and says that every aspiring amateur’s dream should be the Summer Games.

Stanionis’ professional career was set into motion after signing on the dotted line with former Golden Boy CEO Richard Schaefer in the latter part of 2016. Lithuania’s burgeoning welterweight banger has been put on the fast-track to success by making it clear that soft touches are not worth the ink you print fight posters on. In an interview with The Boxing Channel, Eimantas remarked that “I don’t like to be on the low level, you know I was only fighting with the best in the Olympic Games, World Championships, European, so I want to fight the hard fights—I don’t like the easy fights.”

He added immediately afterward that he wants to progress and that “in the hard fights you will grow up like a fighter.”

Growing up quickly is precisely what the clean-cut Eastern European has done so far, making short work of most of his opponents, but learning in the bouts where he was extended. His last contest was an example of that, as he went the full eight-round distance with the durable Levan Ghvamichava, a man who has lasted with an array of potential prospects, including earning a split decision with Yordenis Ugas, a versatile Cuban who fights Shawn Porter this weekend. Eimantas will be featured on the same card against Samuel Figueroa (11-1, 4 KOs), another guy adept at squaring off with those ascending through the ranks.

The end game, as with so many others, is to obtain a world championship and leave a lasting imprint on this sport of the classics. But unlike many of the modern stock, Stanionis also wants to engage in a timeless battle that will be etched in the minds of all who saw it—a Gatti-Ward-type effort.

Only time will reveal what becomes, but high hopes are attached to all who work alongside him. Schaefer elaborated at length to boxingscene.com about what legendary trainer Freddie Roach thinks of the Baltic area blaster after watching him spar Miguel Cotto:

“The other vote of confidence that I got regarding him was from Egis Klimas (the noted manager of Vasyl Lomachenko and Sergey Kovalev, among others), when I saw him in Monaco with (Oleksandr) Usyk, and he came up to me and said, ‘Man, you got an unbelievable talent there. That’s a fighter I really wanted to have, congratulations. He’s spectacular.’”

Anyone who has covered boxing long enough knows that many things can be trained. You can teach a boxer how to punch properly, how to defend themselves, etc. Some stuff, however, you can’t bake into a guy’s style no matter how long you cook it. One of those characteristics is power. Sure, it can be improved even in weak punchers as their timing and technique improve, but you will not shape them into an Earnie Shavers, Julian Letterlough, Randall Bailey, or Julian Jackson. It is one of those born-with-it traits. Stanionis is one of those endowed by genetics—he can crack. David Kaminsky, a potential standout himself who has sparred with the Kaunas-native, stated he has Golovkin-like pop.

Naturally this indicates that Stanionis is an aggressor, and he is. He calmly presses behind an educated and well-timed jab, looking to corner his foe and bang away with combinations to the head and body. This, to me, is where he shines the brightest. The variation in his shots is remarkable because he puts everything into the mix, which makes it all but impossible to read if you are in his wheelhouse. Straights, hooks, and uppercuts are all tossed in and Eimantas will crank them at different speeds. His offense is summed up as a fistic trail mix, only you don’t want to reach your hand out for this stuff because you are getting something nasty in return.

His body punching is likewise sinister (that is the second time I have used that reference and it might fit well as a nickname. Eimantas “Sinister” Stanionis, or “Mister Sinister/Something Sinister”, etc.) and he utilizes the uppercut-left hook tandem that Golovkin became so well-known for. That’s on top of whatever creative gut-busting he can conjure up—double-hooks, jab-hooks, you name it.

Defensively he is responsible and does not admire his work. He moves his head—he slips, dips, slides, and catches. His guard is almost always, which less room for error. Eimantas appears to have the physical strength to block shots on his arms effectively, as well.

All of this is rounded out by good hand-speed, tight execution, gauging space, and a workmanlike attitude that sees him take few breaks.

147 has seen a large influx of Eastern Europeans and former Soviet Bloc nations in recent years, a number of which look as if they can crack the top-10. None may be as much of a blue-chip as this guy. 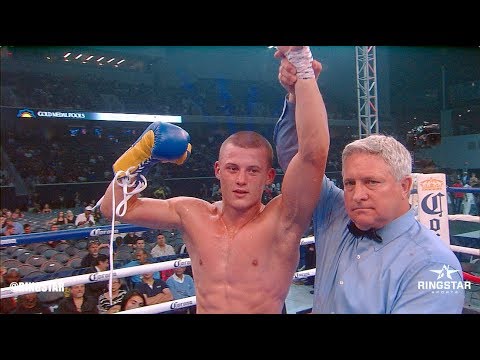 Previous article
« Inside Boxing Daily: Corruption in the Heavyweight division, what’s going on? Can it be fixed? A look back at Benitez-Cervantes
Next article
400 Court Street, History of Pro Wrestling in Evansville: Guest John Cosper on the Evansville-Louisville link »