“At any given moment he switches rhythm, he changes strategy, and I’m hollering at him”—Lou Duva

Whitaker bounced steadily, rhythmically, absorbing every piece of well-reasoned advice that left the wise George Benton’s lips before making his way to center ring for his professional debut against Farrain Comeaux and embarking on a Hall of Fame career that would see him become Benton’s “masterpiece.”

“Professor” Benton fought, observed and worked alongside many excellent fighters, some of which include Joey Giardello, Luis Manuel Rodriguez, Bennie Briscoe, Joe Frazier, Evander Holyfield, Mike McCallum and Meldrick Taylor. But he had a special place in his heart for “Sweet Pea”, and it only makes sense seeing as the Philadelphian was himself an outstanding defender in his prime.

Of course, one didn’t have to have Benton’s depth of knowledge and keen eye to understand why proper adoration for the slippery southpaw was due. Catching an extended glimpse of the Virginia-borne boxer could evoke visceral awe even from those who had little comprehension of the sweeter part of the gloved science. After all, it’s nail-biting enough to watch a man engage in prolonged combat, something the average man has an aversion to, but to see him at ease with his task while paid professionals zip closed-fist fastballs, curves and sliders at him, well, that appears to be a concoction of training, experience and the stuff that wires you long before you ever step foot in a gym. The layman could see that he had “it”.

The abstract “it” was on display from the early going, though Whitaker was less flashy in those days. He went about his job professionally. The jabs pumped like fast-moving pistons, the hooks regularly visited the breadbasket and the defensive gestures were subtler, more pragmatic. Eventually that changed as the bridge to cross for his foes to compete with him grew wider. Dangerous situations for the typical boxer became the opposite for Whitaker; instead, they presented opportunities to embarrass, much like a matador who has perfected his craft against the raging bull.

The second bout with Jose Luis Ramirez was the first stark realization of this. While the first fight was Whitaker sticking and moving in a more conventional manner—popping the jab, using lateral movement—the rematch highlighted his growing confidence and skill progression. “Sweet Pea”, this time, added in heavier doses of aggression and showboating, backing himself into corners, weaving in and out of incoming gloved traffic, and in one famous moment, patting the hard-trying Ramirez on the behind for his failed effort as he strutted out of a corner.

From there it was par for the course, as man after man, many of them rated in the top-10 in their class by The Ring, was subjected to a protracted, skill-laden lesson with varying degrees of spin moves, behind-the-back punches, rope bouncing, corner sitting, and various other creations attached as spectacle. Most notable of the victims during his heyday, at least until Chavez, was “The Professor”, Azumah Nelson, Ghana’s well-versed ring warrior and multi-weight headache. “Pea” was a living, breathing aspirin. He out-foxed the veteran, dictated the terms of the chase and was almost always a step ahead. His antics got him a point deducted in the last round, but hey, when you are that good, I suppose you can spare a point.

In an effort to prove once again Whitaker was the gold standard of boxing, he left his comfort zone and mantle at lightweight and met the premier craftsman at 147. James “Buddy” McGirt was his name and he sported a fine record of 59-2-1 (44 KO’s). The Brentwood, New York-resident understood the importance of the jab and smart footwork. He understood those concepts better after seeing Whitaker in action, and he got the full brunt of it when they met for a second go-round in Pernell’s hometown of Norfolk, Virginia where again, Whitaker out-jabbed the jabber and out-slicked the slickster.

The first McGirt fight paved the way for Whitaker’s highly anticipated matchup with Julio Caesar Chavez at the Alamodome in San Antonio, Texas. At the time, the undefeated Mexican (87-0, 75 KO’s) was rated atop The Ring magazine’s respected pound-for-pound list, which indicated that he was seen as the best fighter in the world by many reputable correspondents. The unorthodox American came in a cool second on the same list. To have the number one and two guys square off constituted a rarity.

Adding to the intrigue was the styles contrast. Julio Caesar Chavez represented the epitome of Mexican ruggedness and aggression, as he could close distance, ambidextrously bang the body, let loose in combination and take whatever was given in return. Whitaker, on the other hand, was much the opposite, relying on hand-speed, unorthodox defensive measures, a sharp jab and intelligent ring movement. Many believed that Chavez could and would wear Whitaker down late.

Naturally, this was billed as a “super fight”. In the ring, the opposite was painfully proven. By round six the near-65,000 in attendance, the overwhelming of which rooted enthusiastically for the Spanish-speaking contestant, were reduced to a hush. Whitaker wheeled around the ever-chasing banger the entire distance while flicking his right-hand jab repeatedly, capitalizing on counter-punching opportunities and reducing Chavez’s usual steam roller-esque offense to a sputtering jalopy. Pernell even had time to get playful as the perceived distance in talent—and presumably the scorecards—widened. Every so often he let his hands drape to his sides and let his inborne ability take over by nonchalantly allowing the former lightweight champion to miss in inches. 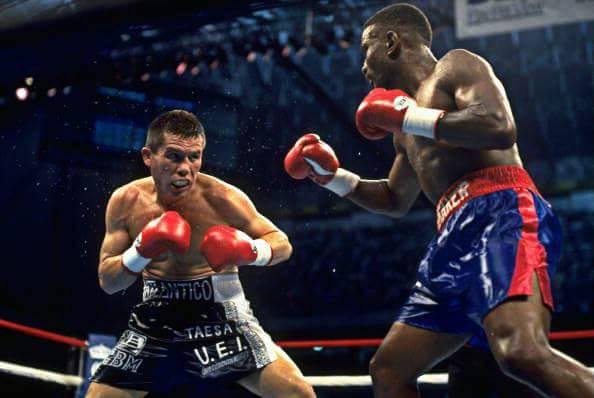 Al Bernstein watched the final seconds tick off to end the 12th round and stated that it was “An amazing performance by Pernell Whitaker. One he promised he would give us, and he did.”

For those at ringside, in the cheap seats, at home watching the television, the victor was clear. The swift-moving southpaw had pulled off a remarkable feat and carved his name as the best in the world. Whitaker had won as clear as the Texas sun.

The disgustingly corrupt Mickey Vann and Franz Marti (who comically said after the fight, “Not everybody knows how to score a professional fight.”) had other ideas, however, staining the event with a stench that boxing fans still smell. The scorecards announced by Jimmy Lennon Jr. read: 115-113, 115-115, 115-115, a majority draw, which was just enough for Whitaker to keep his belt and just enough for Chavez to hang onto his then precarious undefeated record.

Lou Duva, Whitaker’s trainer, barked in frustration after hearing the scores: “I told you we were going to whip him. Then they stole the fight from us.”

Dan Duva echoed the prevailing sentiment, but pointed to something more insidious, stating: “On the day of the fight everyone who knows me knows that I had one fear: that Pernell would get robbed. That these people, for their own political interest, would deny him his victory.”

Whitaker may have been denied a snazzy-looking “W” on his record but that didn’t stop the more objective-minded from giving him his crown, which he would wear proudly for another two years.

The jump to 147 after years as one of the greatest lightweights ever only slightly dulled Whitaker’s skills. Still, a post-prime “Pea” was too sweet for just about anyone to consume. Pernell proceeded to perform clinics against Santos Cardona, James McGirt in a rematch, Julio Cesar Vasquez one division north, Gary Jacobs and Jake Rodriguez.
Eventually, man’s perpetual concern, Father Time’s slow-grinding axe of physical decay, nipped the legend in his trunk-covered butt and snow-powdered nose. Struggles with Wilfredo Rivera (twice) and Diosbelys Hurtado were the clearest signs of a fighter falling from grace. Whitaker felt the approach of the blinking red light when in the latter he had to overcome an early deficit in dramatic fashion, pounding the Cuban into submission along the ropes to halt the contest in the 11th. This after being a 10-1 favorite.

On April 12th of 1997, the fading shackle-maven tried once more to handcuff a man seen above him in Southern California’s “Golden Boy” and nearly succeeded. Oscar De La Hoya, like Whitaker, possessed all sorts of natural goodies, but his game was the offensive side of things. He was young, big, fast and possessed a left hook that could spread you like butter over toast. He was eager to try it out on Whitaker’s skull, too.

Not much of that happened, at least not the hard stuff. Whitaker was as slippery as a wet bar of soap for the budding superstar in the early going and made use of his usual theatrics to frustrate him and the partisan crowd. Near the end of round four, for instance, Whitaker jerked and jutted his way out of a nine-punch combination and then playfully stumbled like a drunk to his awaiting cornermen. He carried out a similar impression three minutes later after making De La Hoya miss wildly with a hard right and left.

But as the rounds passed, the younger, fresher De La Hoya was able to maintain activity and pressure, which was enough for the judges to hand him a slight victory. It’s a judgement Whitaker wholeheartedly disagreed with, remarking in the post-fight interview that “It was a blowout, a shutout,” and that he “could not have performed better.” To this day, a lot of people still side with him being the victor.

The long wave goodbye for Pernell’s reflexes hit a striking point when he looked slowed and mistimed but sharp enough to see the finish against a much bigger, more youthful foe in Puerto Rico’s hard-swinging Felix “Tito” Trinidad. It was an admirable showing and one you could appreciate from a weathered battler who showed signs of what made him special.

The same could be said of his effort with Carlos Bojorquez, the bow-out from nearly 20 years of stagecraft, only his skills had regressed much further. Still, even then, with a well-known coke addiction, over half a decade from his best days and prime fighting weight, he was a few rounds into a winning effort before breaking his left clavicle.

“It” and “Pea” constituted one of the rarest tandems in boxing history. Together they made up a modern defensive icon, befitted as one of the greats at both lightweight and welterweight, and a grade-A showman. The fact that he can fly as high as some of the ancients in their rarified air is a testament to his jaw-dropping skill.

“You can’t teach this guy nothing. He knows it all,” George Benton once uttered. What else needs to be said?