One hundred and fourteen years ago, heavyweight champion Tommy Burns was favored by a 7-4 margin over challenger Jack Johnson.

Born Noah Brusso in Ontario, Canada, Burns was an athletic kid who made his bones in lacrosse and hockey. Burns, who grew up poor, turned professional in early 1900 in the lightweight division. He fought 12 times against varying degrees of competition, winning them all. Check out our top Boxing Betting sites.

Hart, who had defeated Johnson and Jack Root in 1905, was expected to depose of Burns inside of 10 rounds. Instead, Burns beat up Hart over 20 heats.

Johnson, Sam Langford, and Joe Jeanette had deserved a shot at the time more than Burns. Johnson had the edge since he had defeated them all. He called Burns a coward. Remember, this went down in 1906.

Check out the top sportsbook for betting on Boxing

A rematch went down six months later, with Burns mauling his way to victory.

After his victory, Burns,27, sailed to Australia with Johnson in hot pursuit. Burns knocked out Gunner Moir, Jack Palmer, and Irish champion Jem Roache in eighty-eight seconds. Johnson taunted him from ringside.

Burns accepted Australian promoter Hugh McIntosh’s record purse of thirty-thousand to defend against Johnson. To his credit, he would not draw the color line. The defense would be the twelve of his reign. Burns had flattened eight consecutive opponents.

According to boxrec.com, his record at the time was 46-5. His game was counter-punching – using his opponent’s aggression against him. Many writers at the time said his fights were boring. A modern comparison, forgetting the size difference – Andre Ward.

Since being stopped by Joe Choynski in 1903, Johnson had steadily improved. Especially his defense. He was cat-quick and intelligent in and out of the ring. He had become a great fighter.

The referee would decide the winner of the fight. Johnson was concerned for obvious (racial) reasons.

Twenty thousand fight fans crowded into the Sydney Stadium on December 26, 1908, to witness the fight. Another thirty to forty thousand milled outside the arena. Everybody had an opinion. Most picked Burns to stop Johnson.

The fight, or the dominance, began at one pm. 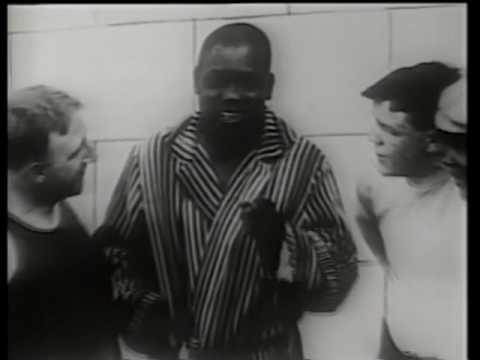 For one of the few times in his career – Johnson got off first in the opening stanza. Setting his left glove on his left hip, he fired a few rapid fire-up jabs that connected.

Johnson held Burns, testing his strength, then went back to work. Soon after, Burns, roughly five inches shorter and twenty-six pounds lighter, was down from an inside uppercut. He rose at the count of eight.

He was a cat playing with a mouse. He was bigger, faster, and stronger.

He beckoned Burns to attack. He talked. Burns, knowing his only chance was to land a big right-hand shot, dove in but was jarred by a clean combination. Burns yelled racial epitaphs at Johnson and held. Check out the top boxing odds.

Johnson said, “Let’s fight, you yellow gray man. You’ve been running away from me long enough.”

Burns had his best moment in round three. He startled Johnson with his Sunday best – a right hand.

By round four, Burns left eye was puffy. Blood dripped from his mouth. The gutsy Burns landed some more body shots in round five. Johnson smiled and chatted with the media at ringside. He then snapped Burns head back with jabs.

Johnson stunned Burns with a long left in round six. He followed up with a combination.

The bout would end in round 14. Johnson popped a weak Burns with blow after blow – culminating with a heavy right. Burns swayed. Police jumped into the ring and stopped the fight. Thru bloody lips, Burns yelled at Johnson. No one could deny his courage.

Said author Jack London, “The fight. The word is a misnomer. There was no fight. No Armenian massacre would compare with the hopeless slaughter that took place in the Stadium. It was not a case of too much Johnson, but of all Johnson.”